by Eric Poole
in Accessories, Gear
0

0
SHARES
225
VIEWS
Share on FacebookShare on Twitter
Handling Para’s new TTR carbine and GI Expert 1911 for the first time created mental images of Airborne troops falling in mass behind enemy lines during WWII. And it should! The underlying foundation in each goes back to combat-proven concepts. Besides the suggestive nature in the company name, law enforcement personnel can be confident that this combination is built for them.

PARA is better known for their line of high-quality and high-capacity 1911s, including the popular LDA and HAWG models. So, I expected having to answer a few questions when I asked a number of North Carolina sheriff’s deputies to help me evaluate Para’s new carbine. I can’t tell you how many times I heard someone ask, “Since when did Para get into making rifles?” Then the following question was usually, “Is this just another manufacturer copying the AR?” Well, not exactly. A simple glance at the Para TTR (Tactical Target Rifle) would contradict my answer to that last question, but the truth is Para has given us something different. 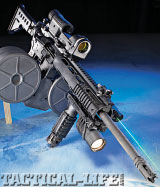 Once you get past the familiar lines of the TTR, you notice the Rapid Deployment Stock (RDS) made by YHM (Yankee Hill Machine) that reduces the overall length by almost 10 inches when folded. It has the general profile of an M4’s collapsible stock but the RDS is extremely slim. As if enough weight wasn’t saved in the stock’s slim profile, five holes are drilled underneath the comb for an anorexic-like weight savings.

Like an M4, pulling up on a lever underneath allows the operator to collapse or extend the stock to fix eye relief, adapt to mission-essential body armor, or change the overall size for training a wide range of different shooters. Pull up near the lower receiver and the stock folds to the left for a compact length of 26.25 inches, convenient for handling in tight spaces or storage in patrol vehicles. In a hurry, the stock quickly swings out and extends to be shouldered. In terms of slings, a horizontal notch is integrated into the stock for those that require threading and a swiveling eyelet attachment is placed near the receiver for a unique single point attachment.

Just prior to firing the first shot, every deputy braced for a jaw-numbing experience. For those familiar with an M4’s recoil system built into a tubular stock, the Para’s thin steel folding stock looks uncomfortable and is absent of the M4’s recoil buffer/spring assembly. Recalling the size of an AR’s bolt carrier and seeing no place for the carrier to travel within the YHM stock, everyone realized that something about the Para was different. Pulling the trigger and feeling virtually no recoil, it became obvious that something was different.

The biggest difference between the Para TTR and other AR-style carbines is in the operating system. Licensed by ZM Weaponry, the Para TTR uses a trademarked Delayed Impingement Gas System (DIGS) designed by Allan Zitta to get the shooter back on target faster than any other rifle in its class. The system utilizes a unique modified gas key sporting a nickeled operating rod that runs through the upper receiver and over the barrel to the gas block where it sleeves the chrome-plated gas tube.

During firing, gas residue has a difficult time interfering with the TTR’s operation because the gas tube never enters the receiver. Surrounding the op rod is the recoil spring that stands in for the conventional buffer/spring system in an AR’s stock assembly. The location of the spring system pushes the rifle down on target instead of up and into your shoulder. The bolt carrier has also been shortened by 2.90 inches, preventing it from traveling beyond the length of the receiver and permitting the use of a folding stock.

The charging handle is beefier and features a channel that redirects any gas heading towards the shooter’s face out to the side. Drawing the charging handle on the TTR is more like drawing a bow’s string than charging a typical AR. That’s because you’re stretching the op rod’s spring system rather than compressing it. Locking the bolt to the rear always means that the charging handle is always pulled back into the receiver.

Releasing the action allows the op rod spring to drive the bolt carrier assembly with such force that it’s hard to imagine a situation where it would be necessary to use the forward assist to lock the bolt into the chamber. Combine the fact that a scarce amount of carbon fouling ever enters the chamber with the benefit of the op rod spring translates into enhanced reliability.

Controlling the front of the rifle is comfortable with the round aluminum free-floating handguard that carries a quad-rail system at the forend. The extended top rail on the handguard is indexed to the integral rail on the upper receiver and gives the user an option for mounting sighting enhancements like night vision or magnifiers beyond the primary sighting system.

Field stripping the upper receiver on the TTR starts with the top rail and is different than a typical AR. Depress a spring-loaded plunger and slide the top rail on the handguard forward to remove it. Draw the action spring back and remove the retaining clip, easing the spring forward. With the upper broken down, shotgun style or completely removed from the lower receiver, remove the charging handle by pulling it rearward from the receiver. The charging handle also brings the bolt carrier assembly and operating rod with it. From this point, disassembly, care and maintenance are identical to a typical AR rifle.

The lower receiver sports the “ZM” mark on the left side of the magazine well and the “Para USA” logo on the right side. Inside was an outstanding trigger that broke consistently at just less than 4.5 pounds. A comfortable grip is obtained by wrapping the firing hand around an ambidextrous CAA tactical pistol grip. The rifle came with one 30-round magazine but for this test, the deputies wanted to experience the performance of this rifle with Armatac’s latest 150-round twin drum magazine.

Optics
Being that this rifle is a tactical carbine, I chose to evaluate the Para TTR with a Meprolight M21 reflex sight 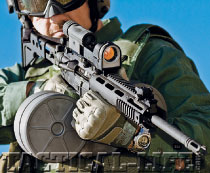 featuring a unique “X” reticule rather than a high-powered scope. The choice may neglect the true accuracy potential of the TTR but if the sheriff’s deputies were to purchase Para TTR rifles as a result of data gathered in this test, it’s probably better to report expected results using optics they’d be more likely to respond with.

Choosing the Meprolight M21 offered an advantage because it can be used in tandem with or without the new MX3 fixed 3x magnifier with quick-release throw levers. Peering through the Meprolight, the fallibility of a 4- or 2-MOA red dot disappears because the very center of the “X” is absent. Accuracy is more dependent on the shooter’s ability to consistently hold a point of aim than the size or brightness of the dot.

Shooting Impressions
For an accurate representation of this rifle’s performance in the hands of our troops, we obtained a case of Lake City 62-grain M855 green tip, which became important in testing the function of the ammo-loving Armatac CL-Mag. Conversely, Hornady supported this evaluation with two different loads of their highly respected TAP (Tactical Application Police) ammo.

Time on the range would determine the accuracy of the rifle with respect to a wide spectrum of grain weights and the impact shift between the faster 55-grain ballistic tip and the hard-hitting 75-grain boat tail. With our objectives laid out, we loaded up the supplied 30-round magazine with military ball to dial in the Meprolight.

Sighting in the Meprolight was a brief experience, hitting a 12×18-inch steel plate at 50 yards from the start. A few turns of the elevation and windage screws with the rim of a spent case redirected the groups to overlap in the plate’s center.

Set up on a bench 100 yards away, we turned our attention to placing 3-shot groups on paper. First was the 62-grain M855 military green tip. Averaging just over 3000 feet per second (fps), the military ammo was the fastest load in the test. It was inconsistent, however, and the erratic groups illustrated the fact. Most groups measured between 1 and 2 inches

but two extreme groups measured more than 4 inches with the worst being recorded at 4.25 inches. The best group from the military batch was fired early and measured an incredible 0.82 of an inch.

Testing the Para TTR with the Hornady TAP ammunition was going to be a different experience. These loads are designed for LE applications requiring enhanced terminal performance with rapid expansion and fragmentation. Staggering the loads, each shooter fired 3 rounds of the 55-grain and followed it immediately with 3 rounds of the 75-grain on one target. This would allow us to identify and measure an impact shift. Hornady refers to the 55-grain TAP cartridge as the “Urban” load. It offers high velocity in shorter-barreled carbines. Featuring a polymer tip, it is a good choice when collateral risk is present but penetration is important. The 75-grain match quality TAP load is Hornady’s heaviest TAP offering, well suited for LE sniper applications and barrels with a 1-in-7-inch to 1-in-9-inch twist. The 75-grain bullet penetrates deeper and transfers more energy to the target than any other TAP load in this caliber.

At 100 yards on paper, the Para TTR favored the 75-grain TAP load with an average 3-round group size measuring 1.69 inches. The best 75-grain group measured an impressive 1.13 inches using the Meprolight reflex sight and 3x magnifier. This group rivals many AR-style rifles tested in these pages with high-powered sniper scopes.

The Hornady 55-grain TAP load would serve this rifle best in close-range operations due to the terminal ballistics revealed in earlier gelatin tests. On paper at 100 yards, the groups averaged 2.78 inches with the best group cutting holes just 1.38 inches apart.

When analyzing these targets, the most interesting finding was discovering only a minimal impact shift at 100 yards. With the lighter 55-grain bullet flying higher and to the right, the difference between the two averaged 1.28 inches of elevation and just 1.62 inches of windage.

Both the Para TTR and the Armatac 150-round CL-MAG functioned flawlessly with no hi-cups or jams of any type. Since the military ammunition was already pre-loaded in clips, loading the Armatac magazine to full capacity was simplified with the use of an NcSTAR speed loader. Blasting through 150 rounds of hard-to-find 5.56mm NATO was a rare and satisfying experience but the free-floated barrel radiated heat in protest. What almost went unnoticed was the absence of felt recoil, a product of the unique operating system and added weight of the balanced 150-round magazine.

Final Notes
The Para USA TTR isn’t the wood-stocked M1 Carbine carried into battle but it does possess some similar handling qualities required by today’s law enforcement. Even fitted with a realistic set of options, the Para TTR carbine delivers public defenders the tactical edge.