Every year, some of the best police patrol rifle and military carbine shooters, as well as interested professionals in America make what has now become an almost religious “pilgrimage” to Michigan for the Center Mass National Patrol Rifle Conference and Competition (NPRCC). The three-day affair not only holds a highly respected and well-endowed, prize-wise, rifle and pistol competition, but also brings in some of the best op instructors and personalities in the weapons and tactics business to provide attendees with a multitude of topics germane to their professional aspirations.

To make this must-attend event a success it involves a cast of thousands headed by owner/operator Sergeant Jeff Felts of the Plymouth Township, Mich., Police Department. Planning for next year starts almost immediately after the last officer leaves the hotel. In addition to board members and many volunteers, the Michigan Tactical Officers Association sponsors the event. The Oakland County Sheriff’s deputies provide security and traffic control for the competition. More importantly, the Multi-Lakes Conservation Club’s spacious and well-appointed facility provides the ranges, range support, and construction of some of the shooting venue’s realistic facades and mockups. A growing number of law enforcement and military product vendors are seamlessly integrated into the competition and conference. The vendor displays at the hotel looked like a miniature SHOT Show and many valuable moments were spent with very knowledgeable representatives.

Weapons Of Choice
A perfect score of 1720 is possible for the five-event competition, and the winner, Officer Marcus Wang of the West Bloomfield, Michigan department, racked up a top score of 1439. This presents an idea of how challenging this was for the street cop, agent and military “grunt” competitor armed with the increasingly popular Patrol Rifle/Carbine. Before I go too far, let me define for those readers that might ask, what is meant by Patrol Rifle/Carbine. Rifles such as the M16A series usually have 20-inch barrels to maximize the ballistics of the 5.56x45mm cartridge. Full-sized rifles can be readily transported in police vehicles, but are not as flexible in close quarters situations as are shorter barreled and more compact carbines. The latter shoulder weapons employ various barrel lengths ranging from 18, 16.5, 14.5 inches and down to micro-carbines with barrel lengths under 12 inches. About 68% of the NPRCC participants use carbines with 16-inch tubes and only 6% opted for the 20-inch rifles. As far as calibers are concerned, 94% employ 5.56x45mm ammunition. I believe that these and other statistics gleaned from the 2007 NPRCC Survey reflect nationwide police preferences. The competition was designed for the armed professionals and no “gun gamers” with high-speed, low-drag match weapons are allowed. It’s a head-to-head, no tricks, cop versus cop competition consisting of law enforcement-relevant evolutions.

The number of competitors is limited so that the multi-stage competition can be completed in one day. This year, 109 police, deputies, agents on state, municipal and federal levels, Marines, and three female law enforcement officers filled out the diverse ranks vying for the national title as well as over $10,000 in loot set aside for each stage winner as well as the overall winner. In this capacity, Sabre Defence was by far the most generous manufacturer, donating rifles and gear to the award’s pot. Among the other vendors that contributed their time and products to the gathering were Aimpoint, Defensive Edge, FNH-USA, H7G, IES, LW Rifles, Original SWAT Footwear, Stag Arms, Smith & Wesson, and Trijicon.

Ranges varied from 3 to 100 yards and round count consisted of 150 for the rifle and four for the service sidearm.

CQBEE Hive tested close quarter battle room-clearing skills in a three-dimensional non-ballistic shoot house constructed by the host conservation cub. It was a time-constrained event, requiring two rounds per target and a magazine change. If time limit was exceeded, competitors lost points from their scores. Winner of this course was Thomas Kenyon of Madison Heights, Michigan PD.

Precision Decisions had shooters low crawling from the 50-yard marker to their “decked” and unloaded weapon at the 35-yard line. After loading, they engaged any of three large, medium and small facial targets of their choice with 15 rounds on one side of the barricade and 15 on the other side. The combat roll was not permitted for the barricade shift. Bipods were also forbidden, but competitors managed to employ 30-round magazines and vertical fore-grips in this manner. The smaller the target the higher the points garnered. Winner of this course was Chief Jeff Chudwin of Olympia Heights, Illinois PD.

Active Shooter saw four “partners” in two patrol cars act as first responders to an “active shooter” incident. After viewing suspect mug shots, rifles were retrieved from cruiser trunks and officers engaged a long-range static target at 100 yards within 40 seconds. Weapons on safe, movement was to 90-yard barricades, where a screen 7 yards away displayed numerous suspect facial targets. Shooter must recall proper mug shot and from standing position engage it with 3 rounds each time it appears for a total of 9 rounds within 35 seconds. On the third leg, the shooters rapidly advance to the 50-yard line and take a seated or kneeling position behind a “window” and fire remaining 10 rounds at a “mover” displaying their respective mug shot, again in 35 seconds. Winner of this course was Marcus Chang of West Bloomfield, Michigan PD.

Cardiac Attack, its name portends lots of vigorous movement and it delivered. Competitors were required to run from their benched and unloaded rifles to a traffic cone 50 yards up range, return to their weapons, make them “hot” and engage designated 50-yard targets from prone, kneeling, or sitting and standing. Included was a required speed reload. Once the shooter completes the rifle phase, the rifle is cleared, placed on safe and again benched on the ground. Shooters then run laterally to the right to a corresponding shooting point with targets situated at 10 yards. They pick up a tin can off the ground, hold it at shoulder height, drop it, draw their sidearm, and engage target with two rounds from both sides of the barricade. All action must be completed within three minutes. Higher score is awarded for headshots with both weapons. Winners of this course were tied between Jerrod Baugh of Indiana Excise PD and Marc Stout of West Bloomfield, Michigan PD.

Static Marksmanship tested precision shooting at long and short ranges, specifically the ability of the shooter to make a seamless transition with their optics and/or iron sights. The 100-yard target was a Terrorist silhouette and the old Delta Force circles, triangles and squares judgmental target was placed at 25 yards. On command, the shooter picks up his weapon and makes it hot. From a standing off-hand position shooters engage each colored geometric shape with one round each. Shooters then goes prone to take on their terrorist at 100 yards and when completed, returns to the standing position and re-engage the geometric targets until all rounds are expended. Thirty rounds with a mandatory reload must be fired within 2 minutes, 15 seconds. Winner of this course was Marc Maycunich of Escanaba Public Safety, Michigan.

The courses of fire were designed to test the officers’ raw marksmanship, range transition, low-light CQB skills, ability to function under physical and mental stress, positive target identification, judgment, target acquisition, reacquisition, and stamina. While it is always difficult to replicate actual police combat conditions, this competition does an excellent job of testing man and machine.

Long and short guns ran the gamut of manufacturers with one .308 caliber M14-type rifle entered against a field of 5.56x45mm weapons. Last year two officers valiantly shot it out with iron-sighted Ruger Mini-14s. At this year’s gathering, they showed up with exquisite SIG SAUER 556 carbines.

During the shoot, vendors and their products were available for discussion and familiarization. I particularly enjoyed shooting Sabre Defence’s high dollar Swiss pistols, such as their new and very ergonomic Sphinx .45ACP. It’s a superbly crafted handgun machined from a solid billet of stainless steel with an excellent double-action/single-action trigger. The 10 + 1 round gun also proved to be extremely accurate. FNH displayed its select fire SCAR Light carbine, and it lived up to its advanced billing as a definite advance in the assault rifle genre. Arrowhead Industries generated a great deal of interest in its shotgun speedloader. Mounted parallel to the shotgun’s magazine tube and looking like a blowgun with a large mouthpiece, the spring-loaded tube will dispense several rounds individually, by merely pushing down with the thumb on the shell’s base. The shell pops into the strong hand just below the gun’s breach and magazine loading gate for a fast and controlled reload.

Voice Of Experience
Several dynamic speakers gave impressive presentations that were germane to the time and therefore, most informative. Bob Parker spoke about the current condition of police weaponry, “Ten Years Since the North Hollywood Shootout” and focused on the emergence, refinement and acceptance of the police patrol rifle and more sophisticated training. Former British Army Sergeant Major Mark Spicer gave a captivating lecture on modern Islamic terrorism and South African expatriate Hank Iverson, drawing on his military and police Special Forces experiences, provided attendees with a very dynamic and enlightening “Extreme Close Quarters Battle” presentation on the employment of the rifle and pistol in police patrol and counterterrorist operations. He emphasized that the “center mass” of a target “needs to be moved up” to the Adam’s apple and the area covered by the hand around the neck. Perennial guest and top competitor Chief Jeff Chudwin addressed “Surviving Officer Involved Shootings and Their Aftermath,” Pat Fiorelli discussed a simultaneous sharpshooter and patrol rifle engagement of an active shooter incident, Brian Sain briefed on Hurricane Rita and a SWAT callout where the patrol rifle was more appropriate than a sniper rifle, Dave Young, the president and creator of the Canadian Academy of Practical Shooting’s live-fire simulation system, examined “Judgment Training in the Use of Force,” Mark Warren covered “Low Light Shooting and Survival With the Patrol Rifle” and former FBI Agent Bob Taubert, in the “clean-up” position, spoke about and demonstrated skill excerpts from his CQB Pistol training course.

Final Notes
Crowned with competition geared to the police “grunt,” this conference is spreading nationwide and is proving to be the source for cutting edge feedback from the actual officers in the arena of conflict. As a result, the entire law enforcement profession is benefiting and a weapon, once looked upon with serious reservations by police administrators is finding its way into more patrol vehicles, so that incidents like the North Hollywood Shootout and Virginia Tech massacre may be terminated more rapidly and with fewer casualties. 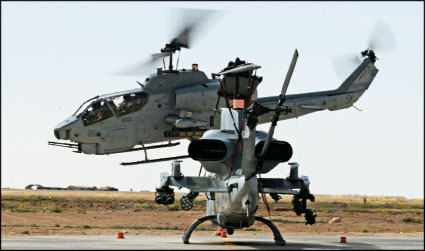 Shot Down Under Fire

Every year, some of the best police patrol rifle and military carbine shooters, as…