Paul Howe is well known and respected in the gun and military worlds. He is served over 20 years in the U.S. Army, with ten of those in special operations. He served as a tactical team leader in multiple combat operations, including during the Battle of Mogadishu (popularly known as “Black Hawk Down”), and as a senior firearms instructor while assigned to a tier-one unit of U.S. Army special operations.

Since his retirement, he has become one of the most sought-after experts on close-quarters combat and law enforcement/military small arms weapons and tactics in the world. He founded Combat Shooting and Tactics (CSAT) to help train elite operators and civilians alike.

Now Paul Howe has teamed up with Law Enforcement Targets to create four paper targets that can help train shooters for specific situations.

The first is a long-distance rifle target measuring 23 by 35 inches that is designed to be used with M4-style weapons with either iron sights or optics at up to 300 yards. The black upper portion allows for sharp sight contrast and allows you to measure bullet drop.

The next target features a slight outline of where the threat’s spine would be, since Howe believes shutting down the central nervous system is the fastest way to stop an enemy. The head box is very small, which promotes greater accuracy. This target works for pistols and rifles. It’s now his standard CSAT qualification target.

The final CSAT target is what Paul Howe calls his “surgical” target. It features six boxes, the first of which can help you record your dope information. The other five boxes show a hostage and hostage-taker from different angles, allowing marksman to practice for several different scenarios at once.

Check out this video to learn more from Paul Howe himself, and to learn more about his targets or his CSAT training, visit combatshootingandtactics.com. 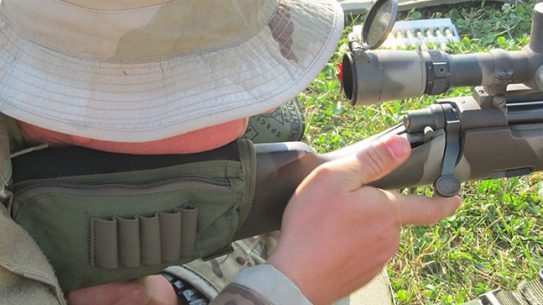 The GPS Defense Sniper School is leading the way for today’s military and civilian...