Revolutionary is used loosely all too frequently but sometimes it is the only word that fits. Suppose we told you that we had extensively tested an AR based carbine that didn’t need lubrication? And that regular cleaning was unnecessary either? And suppose we told you that this AR would run over 20,000 rounds without regular maintenance or a single malfunction? 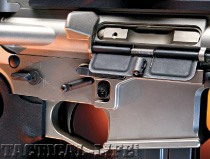 Such an AR upgrade does exist and has been used extensively by Don Alexander, Co-Director of Training at SHD Consulting. Alexander set out to shoot the P-415 upper receivers he got from POF-USA (Patriot Ordnance Factory) without cleaning or lubing them until they started to malfunction. He never made it. Alexander’s rifle was cleaned for the first time at the 16,000-round mark, not because the P-415 needed it, but because he was teaching a course for the state department that mandated a class on cleaning and weapon maintenance.

Since then Alexander has put more than 3,000 rounds through his P-415 upper without cleaning or lubrication. In a memo to Frank DeSomma, President of POF-USA, Alexander stated that he had yet to experience a single malfunction except one that was attributable to a faulty magazine early in his use of the P-415 upper. Alexander, a retired US Army Special Forces Chief Warrant Officer with 26 years of experience, is not one to make statements such as these lightly.

So why choose the 9.25-inch SBR? Many operations involve clearing buildings where stairwells and hallways limit the use of a longer barreled carbine. Also for officers who might need to deploy their carbines from inside a cruiser. The ability to quickly deploy a rifle caliber carbine from inside is highly desirable and the shorter the carbine, the better.