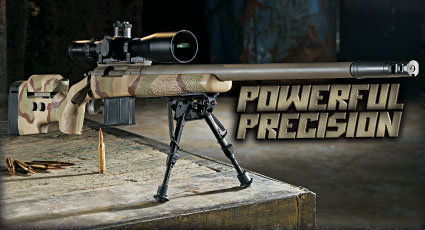 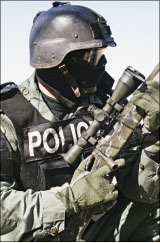 clicks. It also had a SureFire suppressor. The three best groups I’ve ever shot came while zeroing that outfit: .2 minute at 400 yards, .4 minute at 500 yards, .3 minute at 600. The four snipers on our team have all shot Surgeon rifles and prefer them. In my view, it’s the best tactical option out there, hands down!”

If nothing else, the name intrigued me as an unlikely moniker for a rifle. And who in the hinterlands of the Sooner State had the moxy—let alone the tools and technical expertise—to compete with Remington and Kimber and an increasing number of semi-custom makers plowing the fertile tactical market?

Preston Pritchett is a newcomer to the business of building rifles. He started because, “I figured my shop had most of the equipment, and I’d apprenticed under some pretty good machinists.” In 2004, the first year that the company focused on rifles instead of contract machine work for local industry, Pritchett turned out 100 bolt-action centerfires. That was a few years ago.

Shop Talk
Prague, Oklahoma—a few miles off the Interstate—is the closest town to the shop. Pritchett Machine lies a couple miles beyond, mostly on gravel roads. The plain metal building could as well have been a storage shed for fertilizer. Preston ushered me into a small, office, just tidy enough to show the concrete floor and a wink of wall beyond the computer terminals and paperwork festooned on thumbtacks. It may have been there that I came upon the first of many testimonials lauding rifles built by the big redhead in this humble place.

• SSGT Mike Pribble, OCPD Tactical Unit wrote: “In my six years as a sniper on Oklahoma City Police Department’s Tactical Unit, I have had the opportunity to test and evaluate several top-of-the-line sniper systems. The system recently adopted by our team is, in my opinion, far superior to any I have shot… [Each of these rifles features] a 26-inch Krieger barrel, McMillan A5 stock, Leupold 4.5-14×40 Mark 4 scope. [Your bolt action] is a cut above…. the best action on the market.”

• Customer Bill Larson wrote: “The reasons I ordered a Surgeon action [were its] integral recoil lug, integral scope rail with 20 MOA built in, tight-fitting bolt, tactical bolt knob… and it’s made of 4340 steel, not sleeved aluminum. I set it up [my new Surgeon action vertically] on a Brown & Sharpe Model 765 microcell CMM (coordinate-measuring machine) with the recoil lug on [the] table. Perpendicularity and concentricity ran within .0003 inch…. Thank you for a fine American-made product.”

Rifle manufacture now consumes most of the shop’s 55,000 square feet. “We make two actions,” said Preston. “The short one is for the .308. The long one takes cartridges as big as the .338 Lapua.” He led me through a maze of expensive tooling. “We have three CNC mills and two manual mills. There are three CNC lathes, two manual lathes.” He pointed. “This is an electrical discharge machine. It’ll hold tolerances to half a tenth. That’s half a ten-thousandth of an inch,” he added, making sure I knew. Eight-inch receivers commonly stay within 3 tenths, end to end.

I asked him, “Why Surgeon?” The name still seemed unlikely, even awkward.

Preston shared that “An ex-Army Ranger named Surgeon came to work for me soon after I started this project. He was a good machinist, a fine shot.” He shrugged and conceded that the name also brought to mind the precision and first-time imperatives people link with surgery. “That’s why. The name seems to have stuck.” By all appearances, he hadn’t even considered tack­­­­­ing his own name to the enterprise.

Flawless Finishes
Four models are now available. “About 95 percent of all sales are to civilians, though the look and feel of Surgeon rifles is plainly tactical.” He was quick to add that he’s actively courting military and law enforcement contracts. Ten rifles have gone to the Oklahoma City Police Department. Others have sold to the Secret Service.

Preston pointed to the bar stock. “We cut 10-1/2-inch short-action blanks from 2-1/2-inch round bar stock. Long blanks come from 2-1/2 x 3-inch rectangular bars. Before milling, an 11-1/2-inch magnum receiver weighs 19 1/2 pounds.” After milling outside contours, Preston spends five hours gutting the inside of each long action with the EDM. “We can finish a short action a bit quicker.” The EDM burns camming surfaces and leaves a guide rail in the race.

“We thread barrel shanks and mill the action face and lug abutments while the receiver is snugged in one fixture,” Preston pointed out. “That way, all surfaces stay square and true.” Final machining follows heat-treating to 40 C Rockwell, to eliminate the possibility of heat warp. The actions are then de-burred and tumbled in ceramic media. “We bake on the Cerakote finish, usually olive or black.” An integral Picatinny rail incorporates 20 minutes of elevation on the short action, 30 minutes on the long action. You can zero a Surgeon rifle at extreme range without moving the erector tube far from the optical axis of the scope, or running out of elevation adjustment.

Each bolt is machined from one piece of 4140 bar stock, heat-treated to Rockwell 60 C outside, 30 C inside (only the knob is separate). Each tapers slightly to the front to limit play. An enlarged area behind the lugs snugs lockup on single-shots—a nod to benchrest shooters who favor that refinement as one more step toward vault-tight closure. Nitride treatment of bearing surfaces prevents galling.

Use What’s Good, Redesign What’s Not
Minor components on these rifles are interchangeable with those on Remington 700s. That’s by design. The bolt release is an exception, a sturdier version of the Marine Corps release. Surgeon .308 rifles wear a Remington extractor, while the long-action bolt has a claw fashioned to fit inside the right-hand lug. “It throws the case out in a low arc to clear scope knobs,” Preston explained. Because Surgeon rifles are heavy and designed for long shooting, he recommends Badger Ordnance’s 30mm scope rings and tactical scopes from Leupold and Schmidt & Bender. A feature unique to Surgeon rifles is the Tri-Rail, a device that provides three mounting surfaces for gear like flashlights and night-vision optics. It’s installed in front of the integral recoil lug, but can be used in place of the standard recoil lug on a Remington 700.

Preston prefers Jewell and Remington triggers. He favors cut-rifled stainless Krieger barrels, with a 1-in-11 spin for the .308, a 1-in-10 for the .338 Lapua. For reasons he can’t nail down, the military twist spec for the .338 Lapua is 1-in-9.35. Preston told me the crown has a big effect on accuracy. His muzzles get a 45-degree inside taper that flattens to 11 1/2 degrees, then steepens to 45 where it meets the bore. A SureFire brake is standard equipment on 20-inch barrels, and on all barrels bored to .338 Lapua.

Surgeon rifles wear McMillan stocks. The inletting is then complete and then pillar-bedded. The final production step is a trip to the range—a 385-yard stretch of cattle pasture behind Pitchett Machine.

At 7-3/4 pounds, the Razor is the lightest rifle with the Surgeon stamp. “It’s designed for hunters,” said Preston, conceding that it shows a tactical heritage. The 12-pound Scalpel wears a tactical stock; the 14-pound Laser is a single-shot rifle with a target stock. All three feature Pritchett’s short action. By far the most popular chambering is .308, but Preston readily supplies others. The Remedy is a 16-pound repeater with long action and heavy barrel, chambered most often in .300 Winchester and .338 Lapua.

Remedy Testfire
After my tour I shot a Remedy in .338 Lapua. The clean detailing of the metal was obvious even under its Cerakote sheath. While the locked bolt seemed as one with the receiver, cycling proved effortless, and the lack of wobble at the rear of travel was noticeable. The five-round, single-stack detachable box seated firmly but dropped easily with a light pull on the latch. The Jewell trigger broke like an icicle at 2 1/4 pounds. The heavy 26-inch barrel (less the brake) was adequately floated, with slim, even voids below the channel lips. The butt-stock featured pad spacers, and an adjustable cheek-rest.

This Remedy wore a 4.5-14X Leupold LRT scope, with a turret-mounted objective dial and mil dot reticle. Cinched in Barrett rings, it sat high enough to prompt a 1/4-inch hike in the comb. On the bench over a Caldwell rest, the Remedy settled down right away. Its great mass and well-proportioned stock, the Jewell trigger and excellent scope made dry firing easy. I bore-sighted, then loaded up with Hornady’s new .338 Lapua ammo. The violence I expected while hurling 250-grain BTHP bullets at 3,100 fps never came. SureFire’s brake proved effective and relatively quiet. A handful of clicks brought point of impact onto the intersection of the crosswire. I then made a real effort to keep the Remedy dead still for a three-shot group. The bullets flew into one elongated hole that measured just under 1/4 inch!

My results brought to mind another testimonial I read during my visit:
• “I bore-sighted it, fired the first shot and had to walk downrange because the hole was centered in the black dot I was using for an aiming point. The first three rounds went into .380, edge to edge.…” Cory Trapp of Gunsite Academy summed up that event: “I’m not sure there’s a lot of room for improvement at the moment!”

You could say the same about what goes on inside that plain metal building fronting an Oklahoma cattle pasture. If you have a tactical problem—or suffer from substandard accuracy—Preston Pritchett can deliver a Remedy. 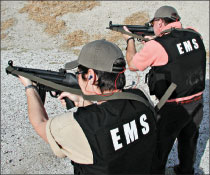 Charles Cowden has worked 11 years for the Oklahoma Highway Patrol. Now on the…