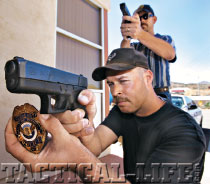 Are hollowpoint bullets the best choice for self-defense? Generally speaking, a well-designed hollowpoint will inflict greater damage on soft tissue than other bullet types of identical diameter. The fact that just about every domestic law enforcement agency uses a jacketed hollowpoint round in their service handguns pretty much tells us all we need to know. But there is an exception for every rule.

The bottom line is that any firearm used for self-defense must be totally reliable with your load of choice. An expanding bullet is highly desirable, but 100% reliability remains an absolute requisite. That rascal, Mr. Murphy, always seems to show up at the most inopportune times.

These days, the autopistols turned out by the major players tend to be hollowpoint friendly, but it was not always that way. A generation ago, there was absolutely no guarantee that an out-of-the-box pistol would reliably feed hollowpoint ammunition. This is one of the many reasons revolvers continued to dominate the law enforcement scene until the late 1980s. To get that pistol to a truly street-worthy level, some attention from a skilled pistolsmith was required.

If anything, pocket pistols were an even dicier proposition and most SMGs were definitely ball ammo only. Warts and all, many of these firearms are mechanically sound and could still provide excellent service. What if we could feed these classics something as reliable as ball, but with better terminal performance?

Feeds Like Ball
CorBon/Glaser has effectively solved the riddle with the introduction of their Pow’RBall line of ammunition. This non-hollowpoint design feeds as reliably as ball, yet expands when passing through soft tissue. The Pow’RBall line has grown to include just about all of the popular defensive revolver and pistol chamberings.

In creating the Pow’RBall line, CorBon/Glaser took a most unique approach. A controlled expansion bullet is topped with a polymer ball, giving it a similar profile to a full metal jacket. The polymer ball in the nose actually enhances feed reliability. A lead core is contained in a copper cup jacket that also holds the ball captive. The ball sits atop a specially designed cavity in the bullet’s core that promotes expansion and penetration. When striking soft tissue, the polymer ball further facilitates expansion. This design is so revolutionary that it’s patent protected.

One problem often associated with some hollowpoint designs is a tendency to clog with clothing fibers. When the hollow cavity is packed with fibers, the bullet will not expand and behaves very much like a full metal jacket, reducing stopping potential. Since clothing is an obstacle present in all police action and defensive scenarios, performance through clothing remains an important criterion.

The capped bullet of Pow’RBall ammunition will defeat the heaviest clothing barrier and still perform. As the bullet passes through the clothing barrier, the polymer ball prevents the core cavity from being fouled by fibers. After passing a short distance into tissue, the ball separates and the expanded jacketed core punches deeper into the vitals.

How It Works
Recently, I obtained representative samples of Pow’RBall ammunition in all the popular defensive handgun cartridges. Sample rounds were fired through an Oehler 35P chronograph to measure muzzle velocity and into 10% ballistic gelatin to assess terminal performance. Gelatin blocks were covered with four layers of denim to simulate heavy clothing. Depth of penetration, expanded diameter, and retained weight were noted.

First up for consideration is the .380ACP Pow’RBall offering. I’ll confess to not being a big fan of the .380 ACP, but this round is now riding a new wave of popularity. Really small guns like the Kel-Tec P-3AT and Ruger LCP remain excellent choices as backup guns and deep concealment hideouts. A few of my associates use these downsize .380s in that role. From my Beretta 85, the 70-grain Pow’RBall load averaged 1170 feet per second (fps) and penetrated 11.15 inches of ballistic gelatin. Expanded diameter of the recovered bullets came in at .48 caliber.

The .38 Special remains a very popular self-defense number, although its role has changed significantly. Thirty years ago, the .38 Special was the overwhelming choice of law enforcement for both duty and off-duty. Today, it is a rare sight to see a police officer with a .38 Special duty gun; however, snubs are still widely utilized by the forces of good. Likewise, armed citizens with CCW permits often select a short barrel, small frame snub for discreet carry.

With that in mind, an S&W M640 Centennial with an abbreviated 1.88-inch barrel was used as the test weapon. From the Centennial, the 100-grain +P Pow’RBall averaged 1087 fps and
expanded to .49 caliber. This load penetrated 12.75 inches of gelatin after passing through the denim barrier.

The 9mm is the world’s most popular service cartridge and has been around for over 100 years. From our Glock 17, the 100-grain +P Pow’RBall trotted through the chronograph screens at 1340 fps. Recovered bullets averaged .49 caliber with 10.75 inches of penetration. Just for giggles, I ran a cylinder full of 9mm Pow’RBall through my S&W M940 Centennial with a 2 inch barrel. Muzzle velocity was still a very snappy 1290 fps, squarely in .357 Magnum range.

One of the more impressive loads tested was the Pow’RBall .357 Magnum. Recovered bullets averaged .56 caliber, better than 1.5 times their original diameter. This load zipped along at an impressive 1437 fps despite being launched from my 2.5-inch M19 Combat Magnum. The 100-grain bullet was the deepest penetrator into the tissue stimulant at 15.85 inches.

In relatively short order, the .40 has become the most popular service cartridge and commercial sales are equally strong. The 135-grain Pow’RBall load penetrated to an optimum depth of 12 inches and expanded to .52 caliber. From a Glock 22, muzzle velocity was clocked at 1336 fps.

Another high-performance contender is the .357 SIG. This Pow’RBall load posted the highest muzzle velocity at 1526 fps and expanded to over 1.5 times its original diameter. The .357 SIG load averaged 11.5 inches of penetration before coming to a stop in the denim-covered gelatin.

I have long favored the 10mm cartridge and it remains a personal favorite. The full house 10mm outperforms the .40 and .45ACP and simply leaves the 9mm in the dust. Fate, however, has not been particularly kind to this cartridge. It has a little more bump than other autopistol cartridges and guns so chambered tend to be larger than most folks care to tote around, thus limiting its appeal. From my Colt Delta Elite, the 10mm Pow’RBall load cruised along at 1372 fps and the 135-grain bullet penetrated 13.5 inches of gelatin. Recovered bullets averaged .63 caliber. This load has proven to be very manageable in both the Delta Elite and an S&W M610 revolver.

Big-bore aficionados who favor the .45 ACP might find the Pow’RBall load especially interesting. Many 1911s, manufactured prior to the 1980s, will not reliably feed jacketed hollowpoints. Pow’RBall .45ACP may be the ticket to getting both improved terminal performance plus 100% feed reliability out of some of these old warhorses. This load has never missed a beat in my Kimber Desert Warrior or LW Commander. From a 4-inch S&W M625, this offering navigated 11 inches of gelatin and expanded to .68 caliber.

Pow’RBall ammunition stands as a viable alternative to ball and conventional hollowpoints. As illustrated here, terminal performance exceeds that of full metal jacket. I still think a premium quality hollowpoint holds the performance edge, but Pow’RBall may be the next best thing. Penetration is more toward the moderate end of the scale, particularly with the lighter calibers. For most non-law enforcement defensive scenarios, I don’t consider that a liability.

Clearly, Pow’RBall ammunition fills a niche. If, for whatever reason, hollowpoints don’t make the cut, consider CorBon/Glaser Pow’RBall. I don’t think you’ll be disappointed. Now if they would only make it in a .44 Special, I would be all set! 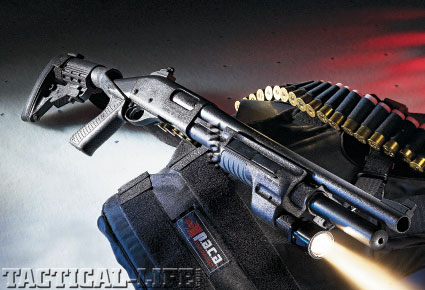 Are hollowpoint bullets the best choice for self-defense? Generally speaking, a well-designed hollowpoint will…