1
SHARES
2.5k
VIEWS
Share on FacebookShare on Twitter
The primary function of the AR sling is to help carry a duty or combat rifle, allowing the operator to keep both hands free for other tasks. While its function may seem simple, choosing the right tactical sling and proper attachments requires navigating myriad options depending on your weapon choice, purpose and the types of mounting points on your rifle.

The main decision to be made is sling design. There are three key choices: one-point, two-point, and three-point, each differentiated by the number of places they attach to the weapon. In the case of the three-point sling there are two attachments to the weapon and one to the body strap. In addition to the primary designs, there are some variations such as four-point and one-point slings that attach to a load-bearing vest, but the discussion here will be limited to the three main options. Each sling design has its own advantages and disadvantages and may work better on one type of rifle or application than another. 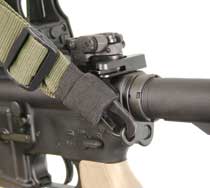 The one-point sling attaches to the AR at the rear of the receiver using special receiver end plates with either a slot or hole for mounting. The slot will fit a sling strap directly without any connectors, and the hole design is for use with a spring clip. The advantage of the one-point sling design is its flexibility in use. Being attached at only one point makes it very easy to move the gun around. Of the three designs, the one-point sling is the easiest to use when switching between dominant and support shoulders. 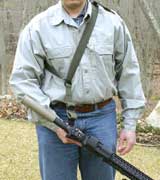 Due to its maneuverability, the one-point sling is a good choice if you are operating from inside a vehicle. However, its greatest strength may also be its greatest weakness. Since it is only attached by one point, when slung, the rifle swings quite a bit if not controlled. The muzzle points downward, often at your feet, and tends to hit your legs as you move. Additionally, when dropping to your knee, the muzzle nose-dives into the dirt. You can counteract this movement with a hand, but as the purpose of the sling is to keep the operators hands free, it kind of defeats the intent.

The one-point sling is probably not your best option if you need to move and use both your hands, such as when handcuffing or other physical duties. The best use, and where one-point slings are most often excel, is in competitions where the need for flexibility, speed and ease-of-use outweigh utility. 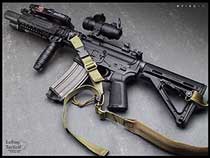 The two-point sling offers far greater stability when slung compared to the one-point design. Because it is attached to two points rather than one, the rifle tends to stay close to the body, allowing the use of both hands while moving. When a rifle is dropped to the slung position with a two-point sling, the gun does not nose-dive downwards; it usually positions itself diagonally allowing you to shoot from your knees without the gun hitting the ground.

This stability comes at a price as shoulder transitions are more difficult than with a one-point sling and use in tight quarters such as a vehicle is restricted.

Depending on your weapon design, the two-point sling can be mounted at various locations with different methods. In the rear, it can be attached to a standard stock by use of a butt-stock adapter, or if the weapon is so equipped, a push-button quick release can be mounted in some collapsible stocks. With the use of a receiver end plate, the rear end of the receiver is another good option as well.

The forward end of the sling can be positioned anywhere along a rail system, or if you have a standard handguard, it can wrap around that also. An A-frame sight can also be used with a front-sight mounting adapter. Another option is a sling pin that replaces the AR’s front take-down pin to provide a sling attachment point at the front of the receiver.

With all the mounting options, the two-point sling design is the most flexible in terms of attachment locations. The exact placement is a personal choice and is worth some experimentation to find the variation that offers you the most flexibility.

There are manufacturers that offer quick-adjustable versions of the two-point sling with each company producing a slightly different design. The benefit is that if a weapon is shared, such as in a patrol situation, the sling is quick and easy to adjust; it can be lengthened quickly to aid in shoulder transitions. If there is a need for aggressive movement that requires two hands, such as scaling a fence, the sling can be instantly tightened to the body for the task, and then returned to normal length for use. Neither design allows excess material to flap around or get tangled.

This design gained popularity a few years ago. The sling connects to the rifle at two points, with webbing running along the side of the gun, and a third attachment point connecting to one end of the body strap. Rather than have the sling attached at the two furthest points of the rifle, the intent of the 3-point sling is to shorten the distance between the body strap points. The shorter distance keeps the rifle closer to the body and makes it easier to control when slung.

The problem with the use of three-point slings with ARs and several other types of rifles is that the webbing that runs along the entire length of the gun may make it cumbersome to use, can interfere with the rifle’s controls, and has a tendency to get tangled with gear carried on load-bearing vests.

With the popularity of rail systems and the introduction of new mounting accessories for the AR, the same benefits of a shortened distance between body straps are offered by the two-point design without the drawbacks of the additional webbing of the three-point sling. The three-point design is most useful with long guns that do not have short distances between mounting points and do not have controls on the sling side of the weapon. 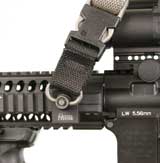 Choose the Sling That Works for You

The choice of sling design really depends on your purpose and specific equipment. If speed and easy shoulder transitions are your game, the one-point will most likely be your best choice. If mounting options near the front of the receiver are limited, the three-point design may be a better choice since it shortens the distance between the body straps. For optimal control when slung, the two-point may be the best choice of all.

Figuring out how you will be using the sling and what mounting options are available are the first steps to getting a sling that works for you.