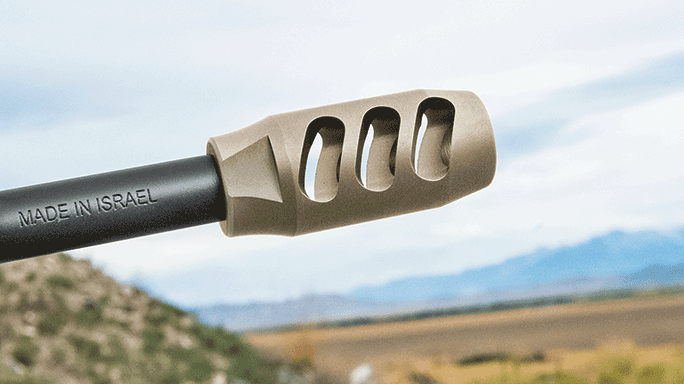 1 of 4
Silencing the Bull: RAT Worx’s ZRX 9mm Tavor Suppressor
RAT Worx designed the ZRX suppressor so that it mounts to a muzzle brake. Both are then installed on the Tavor inside an ARClight Forearm. 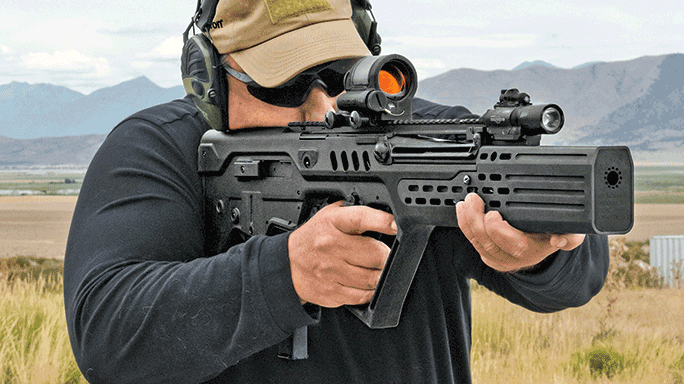 2 of 4
Silencing the Bull: RAT Worx’s ZRX 9mm Tavor Suppressor
The flat bottom of the ACRlight Forearm makes it easy to shoot from off-hand, a rest, a barricade or other support. 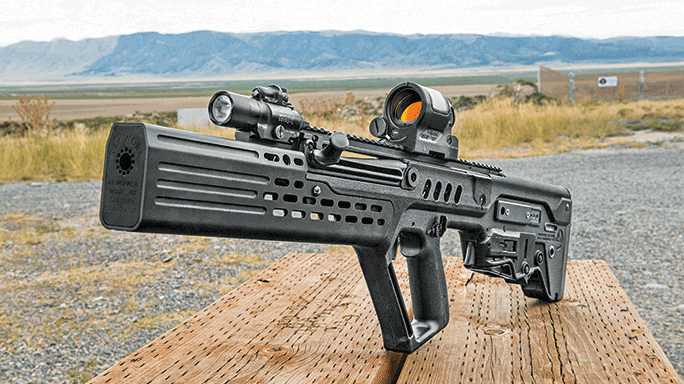 3 of 4
Silencing the Bull: RAT Worx’s ZRX 9mm Tavor Suppressor
“… the ZRX lets you fire in close quarters without the muzzle blast or sound from a conventional brake or flash suppressor.” 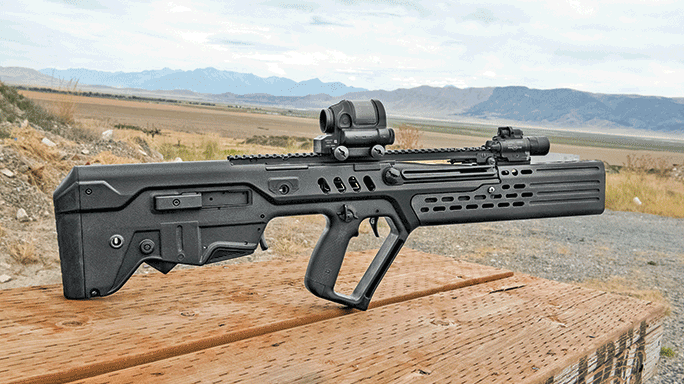 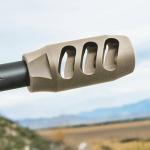 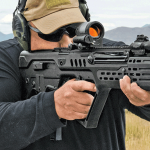 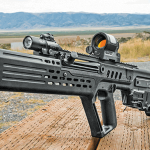 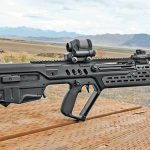 The IWI Tavor SAR bullpup offers a number of advantages, with the most obvious being its size. Using a 16.5-inch barrel, the SAR’s overall length is still shorter than many ARs with 10-inch barrels. Of course, a shorter gun translates to better handling in urban environments, yet the SAR still offers a full-length barrel for better ballistics and higher velocities. Tavor SARs can also be converted from 5.56mm NATO to 9mm, adding a whole other dimension to the platform’s versatility. Many still prefer the 9mm for close-quarters work, and in the Tavor SAR, the recoil is minimal while being very accurate. The conversion is simple and results in a reliable, fast-handling personal-defense weapon (PDW) chambered in 9mm.

My own Tavor SAR is one of the most proven rifles in my inventory. I’ve fired thousands of rounds through it at numerous training schools and during some rather harsh conditions, but it just keeps on working. Additions like the Geissele Super Sabra trigger pack have only made it better. Recent testing in 9mm maintained much of my appreciation for the system, but it’s a bit long when suppressed. Most 9mm suppressors are lightweight units built from aluminum and between 6 to 8 inches long. They function well but add to the bullpup’s length. What I needed was a short suppressor designed specifically for the Tavor SAR, and Research And Testing (RAT) Worx has created just that with its ZRX 9mm Tavor suppressor.

RAT Worx started with the ARClight Forearm design from Manticore Arms. Designed to replace the factory Tavor handguard, the ARClight is lightweight, facilitates accessory mounting with a number of different rail systems and works with a 17-inch 9mm barrel.

KeyMod versions are also available, and the handguard can come in black, Flat Dark Earth or OD green. For the ZRX, RAT Worx installs a suppressor inside the handguard that adds only 2.75 inches to the overall length. And, since it does not result in a short-barrel rifle (SBR), there is only one tax stamp required for the handguard/suppressor. Best of all, the standard black ZRX handguard/suppressor system I tested retails for only $400—as little as many rimfire suppressors. It also weighs only 20 ounces, helping the Tavor SAR maintain its impeccable balance.

Installing this handguard and suppressor is downright simple. Remove the factory handguard and attach the new muzzle brake. Slide the handguard and integral suppressor into place—a tab on the bottom of the handguard lines up with the lower portion of the rifle—and reinstall the two factory screws. Thanks to a Midwest Industries handguard, I usually keep a light mounted to my Tavor SAR in the 12 o’clock position, and a rail on top of the Manticore ARClight forearm allowed me to install my SureFire X400 light/laser in the same location. This means it indexes with the Trijicon SRS sight I keep mounted on top of the rifle. With the ZRX system installed, the Tavor SAR balanced well and was easy to maneuver indoors, up and down stairs and around corners.

Before adding the ZRX, my 9mm Tavor SAR ran flawlessly with other sound and flash suppressors installed. The only difference with the ZRX is that brass was flung a bit farther than when using a conventional suppressor. The accuracy was excellent, especially at 50 yards and in, and the laser made short work of anything at “across the room” distances.

Starting at 25 yards, I fired a 10-shot group off-hand to confirm the bullpup’s accuracy. Using Barnes 115-train +P TAC-XPD ammunition, it cut a fist-sized hole in the center of the target. Stepping back to 50 yards and using my truck’s hood as a rest produced similar results. The recoil remained minimal, and the sound signature was significantly reduced, which was surprising given how short the ZRX is. RAT Worx has yet to publish decibel reduction numbers for the ZRX but, anecdotally, it was quiet enough for painless outdoor
use with +P ammunition.

Deploying the weapon from inside my truck reminded me why the Tavor SAR is such a handy CQB system. Moving around and even under the truck, it was easy to use. The ARClight handguard provides solid support on barricades, bumpers and other obstacles, and the ZRX lets you fire in close quarters without the muzzle blast or sound from a conventional brake or flash suppressor.

The ZRX-equipped Tavor SAR continued to shine indoors. I engaged targets on the move, around corners and from various positions in a shoothouse. SureFire’s X400 proved itself here, as I could use the light, laser or both with ease. Making a few runs using just the laser for aiming, this setup was fast and my shots were nicely grouped in the targets. The testing went so well, in fact, that I’d consider using this setup for home defense. Either way, the ZRX made running and gunning in the shoothouse a breeze, keeping my rifle as handy as a standard Tavor SAR bullpup.

After repetitive multi-round engagements with little pause, the ZRX did get a bit warm, but never hot enough to be uncomfortable. I barely noticed any heat transfer under normal use. The back-
pressure was also minimal.

The black ZRX I tested is currently available for $400, while KeyMod versions in OD green or Flat Dark Earth are $470. An OD green model with standard rail slots is also available for $420, and they all come as complete units that include the ARClight handguard.

The RAT Worx ZRX is an impressive little sound suppressor system and a perfect fit for the Tavor SAR. Once I started running this setup, it was just like my 5.56mm Tavor but without the noise or blast. The fit and finish are excellent, the installation was simple, and it requires no modifications to your 9mm Tavor SAR. If you are looking for an incredibly useful upgrade at an incredibly reasonable price, this just may be the ticket. 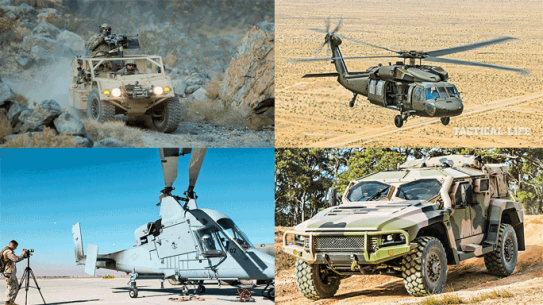 Take a look at the next-generation tactical vehicles that are redefining the battlefield.