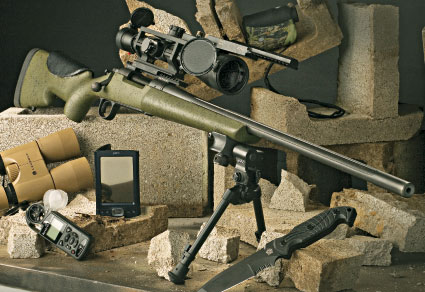 Gun Details
The Remington 700 XCR that’s the basis of our test begins with the bolt action design. Like all Model 700s, the bolt face, barrel and receiver surround and support the cartridge with three concentric circles of ordnance steel. The receiver is machined from a block of solid steel, and drilled and tapped for scope mounts. The .223 and .308 rifles use the Remington 700 short action, while the .300 Win Mag is based on the long action. Barrels are 26 inches long with a match crown at the muzzle.