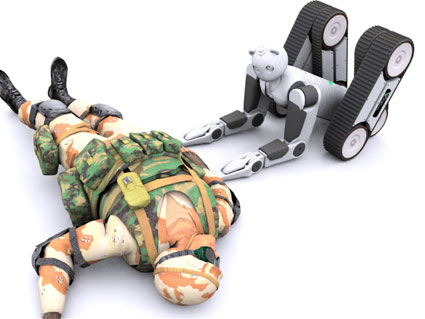 The mission of the 6-foot tall, 215-pound BEAR—Battlefield Extraction-Assist Robot—by Vecna Robotics is to go in harm’s way to reduce additional risks to human life, and then do tasks that aren’t humanly possible.

Whether the task is to rescue a wounded soldier in a ravine, an unconscious firefighter in an attic, or a crippled civilian in an alleyway, rescuers hope they’ll soon have a new robotic teammate that can go almost anywhere to quickly find and extract victims without endangering more lives in the process.

Although robots have become fixtures in manufacturing factories the past few years, only recently have some versions become mobile enough to perform more complicated tasks on the street or in the field. Most of them, however, are considered remote-controlled vehicles, not robots, because they’re wider than they are tall. No matter what they’re called, some mobile robots have proven vital in conducting unmanned searches and explorations in caves, damaged buildings, and lunar and planetary surfaces.

That’s just the beginning of robotic capabilities, however. The goal of robots now being developed by Vecna Technologies of College Park, Maryland, is to go far beyond the role of unmanned searches and monitoring missions. Vecna’s developers want their creation to be able to assess a situation, go over or around obstacles, find victims in smoldering rooms, and then lift and extract them safely while the BEAR’s operator remains in safety. The BEAR not only can lift 260 pounds with one of its robotic arms, but it also has the strength and dexterity to use the other arm to pull a heavily equipped soldier out of a tight spot, adjust its human load, and then carry the person to safety. Its combined lifting and carrying capability is at least 520 pounds when using both hydraulic arms. 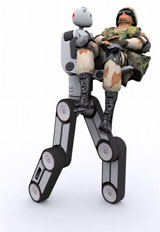 Army Testing
BEAR has been in development nearly four years at Vecna through the U.S. Army’s Telemedicine and Advanced Technology Research Center (TATRC). The BEAR project is being funded by Congress with a grant exceeding $1 million in 2007, and its designers hope it will be deployed for regular service within another three years. The BEAR’s design is perfectly suited for a wide range of duties, including disaster rescue missions from buildings damaged by fire, mudslides or explosions; or mine shafts damaged by explosions, cave-ins or earthquakes. It can also go into places contaminated by biological, chemical or radiation hazards. In addition, Vecna hopes to create versions that can be used in hospitals and nursing homes for the heavy lifting that often injures nurses and other health-care workers as they move patients in and out of beds and wheelchairs.

When people first see the BEAR, they’re so captivated by its humanlike design and dimensions–6-foot-2 and about 215 pounds–that they overlook its incredible strength and wide range of functions. “It definitely fits the popular conception of what a robot is supposed to look like,” said Vecna’s Jonathan Klein. “When most people think of robots, they envision the robot from ‘Lost in Space,’ Robby the Robot, or R2D2 or C3PO from Star Wars. Plus, when they hear the kind of work the BEAR will do, it captures their imagination. Here’s a robot that’s just like those in the movies, and it’s trying to do good things for people while making the world a better place.” 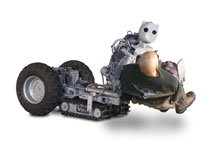 Battlefield Presence
The BEAR’s battlefield capabilities could be revolutionary. Its basic goal is this: Rather than send an Army medic or Navy corpsman into every hazardous situation, this robot can perform some rescues without risking additional lives. Because the BEAR is so incredibly strong and mobile, its developers are increasingly optimistic that it could also take the place of entire stretcher teams. Not only can it single-handedly lift wounded soldiers or Marines, it can also carry them low to the ground for long distances to avoid detection, and then lay them gently in a safe place.

All of this is possible because its designers are incorporating high technology with a time-tested lifting system that has been around at least a million years: the human body. The BEAR has calves, thighs, arms, torso and head that resemble a human’s. The legs are actually two pairs of segmented tracks with joints at the knees and hips, which allow the BEAR to tilt forward or backward, or all the way down to a crawling position. It employs “dynamic balancing behavior” to keep itself righted on its lower tracks, knees or even its hips whether it’s by itself or carrying a person. This design also allows the BEAR to back up to right itself should it fall or get knocked over. In addition, it can be fitted with wheels instead of the lower tracks when wheels are better suited to the terrain.

The BEAR’s humanoid design is also helpful because it helps its operators to better relate to the movements needed to perform various tasks.

“Before the BEAR came along, most robots tested for these jobs resembled a small jeep with a gigantic spatula on the front end,” Klein said. “Those designs work great if the person falls in an open field, but they’re not much use inside buildings or wooded areas, or between a fence and wall in an urban area. The BEAR replicates the human form, which isn’t too bad of a system in its own right. Human physiology is very well understood, and the dynamics involved in human lifting is well-studied.

“By the time the BEAR is fully deployed, we expect it will have at least 25 to 35 different degrees of movement,” Klein continued. “That allows it to be agile and dexterous so it can go up and down stairs, open doors, and move beams or boulders so it can reach soldiers in confined areas and bring them back.”

The current design is remotely guided by a joystick, and a microphone and camera on the BEAR help the operator see and hear what’s going on around the site. The BEAR also has sensors in each joint so if an arm or leg is shot or damaged it can compensate for it.

Klein said that’s another advantage of building a robot based on the human body: “The more we can model it after the human form, the more intuitive it becomes for the operator to maneuver it,” he said. “At some point, by donning the gloves, and using a heads-up display and other equipment that matches the user’s body, we will be able to mime what we want the robot to do.” 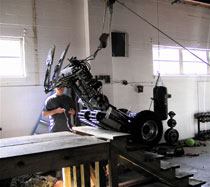 Future Plans
Vecna expects even more impressive performance from the BEAR in the years ahead.

“We want our robots to become as intuitive as possible,” he said. “We’re working to develop semiautonomous movements at higher and higher levels. For instance, we want them to be able to recognize stairs and know how to climb them without being guided. We want to be able to say, ‘There’s a soldier over there; go find him and bring him back.’ Then we’ll want a robot that can be told to go find specific people, or go find anyone in the building and bring them down. The more it can do on its own with artificial intelligence, the more useful it will be.”

Klein believes the BEAR could be put in service well before 2010, depending on funding for its continued research and development. “Once it’s out there, it should be extremely affordable, but the commitment needs to be there to keep things on target,” he said. “With the breadth of things it can do, and its ability to assist in natural or manmade disasters on the battlefield or in the homeland, we’re confident it will prove its value no matter where it’s sent.”