by Mike Detty
in Accessories, Gear
0

In recent years the AR-15 has become one of the most popular guns ever. Its light recoil, excellent accuracy and reliability make it a favorite for those that use it for serious matters. A seemingly unending supply of accessories for this weapons platform provides its users with the ability to customize the gun for mission-specific work. That’s the good news. The bad news is that customizing an AR can be expensive and when you’re finished you’ll have a box of parts left over. It always makes sense to buy a gun, as close in configuration as desired. That way, you won’t have a huge box of left-over parts and an empty wallet to show for your efforts. 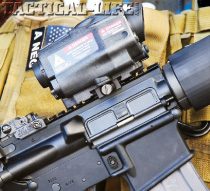 “Over the long haul you’re saving yourself quite a bit of money in parts, shipping, gunsmith fees or tools, not to mention time and aggravation,” said Steve Mayer, New Product Development Coordinator for Rock River Arms (RRA).

I recently received a sample of RRA’s Elite Comp rifle. This weapon is as close to what I perceive as a perfect patrol carbine and/or perimeter weapon as anything I have seen. According to Steve, “More than anything it was a showcase for a lot of our new products that were coming in line. It has our new Half Quad Rail…” The rifle also features RRA’s Tactical Muzzle Brake, folding front and rear sights, ambidextrous

side sling swivels and a MagPul CTR collapsing stock. It also possesses a crisp 2-stage trigger and mid-length gas system. Every part on this rifle seems to make sense for its use as a tactical rifle.