by Mike Boyle
in Accessories, Gear
0

Introduced in 1974, the Ruger Mini-14 has become one of the most popular self-loading rifles of all time. The casual observer will note a strong resemblance between the Mini-14 and the older M14 service rifle and this is hardly a coincidence. In coming up with the Mini-14, designers L. James Sullivan and William B. Ruger borrowed heavily from the M14 blueprint, but incorporated numerous innovations and cost-saving engineering changes of their own.

The original Mini-14 was chambered for the popular .223 round and this handy rifle became an instant hit with law enforcement. More recently, the Ruger Mini-14 platform is chambered for the 7.62×39 and 6.8 SPC cartridges. A version with full-auto capability, the AC556 has also been manufactured. 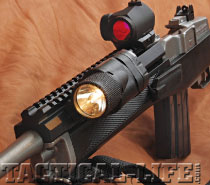 Bill Ruger’s vision of creating a light, rugged carbine was clearly realized with the Mini-14. The fact that it cost less than its main competitor, the AR15, became a strong selling point. Another quality that worked to the Mini’s advantage is that it looked like a sporting rather than a military arm. In some quarters, its appearance, together with cost, still make it a far easier sell to the town fathers.

I’ve owned a few Minis and have had considerable experience with several more on my job. For the most part, Mini-14s have been reliable performers and have continued to work with just a minimum of upkeep. One quality that often came up short, however, was accuracy. Compared to the AR15 and other military sporters, the Mini-14 lagged far behind and accuracy potential was less than stellar.

Around 2003, Ruger began to revamp production of the Mini-14 in a very significant way. The gas system was modified, new sights were offered and the new Minis were built to much tighter tolerances. At this time, Ruger also noted that many police departments were exploring the concept of a patrol rifle and felt their upgraded rifle could fill that niche.

Ruger Mini-14s optimized for the patrol mission are now available. Perhaps the best news of all is that these rifles are equipped with a re-contoured, flanged barrel that is heavier than the original in an effort to achieve better accuracy. Several different law enforcement configurations are now offered including some with M4-style telescopic stocks.

Gun Details
Recently, I was able to obtain a Ruger Mini-14 Tactical for test and evaluation. The Tactical version features a full-length rail in place of the polymer handguard to facilitate the mounting of an optically enhanced sight system. My middle-age eyes need all the help they can get in obtaining a reliable index and red dot sights hold considerable appeal for me. Let’s see how it all shakes out.

The Mini-14 is a gas-operated, box-fed, autoloading rifle that combines the best features of the Garand and M14 with modern technology. Its operating mechanism uses Ruger’s proprietary fixed piston/moving cylinder gas system in conjunction with a simplified Garand-type rotating bolt. Field stripping to basic sub-assemblies is accomplished without the use of tools.

So what makes the new Tactical special? Most obvious is the use of a synthetic rather than the walnut-finished American hardwood stock of the original. Action and barrel of my sample were rendered in stainless instead of carbon steel. The Tactical is outfitted with a Mini-Scout Mount II, full-length rail by Amega Ranges. Aimpoint’s T-1 Micro red dot sight proved to be the perfect companion for the sample rifle. Standard iron sights consist of a ghost ring aperture rear mated to a blade front. The rear sight is adjustable for both windage and elevation. A set of protective wings keeps the front sight safe from hard knocks. Like all new generation Ranch-style Mini-14s, the Tactical version has recesses in the top of the receiver for the attaching of scope rings to mount a telescopic sight. Barrel contour is indeed beefier than the original Mini-14. The 16.12-inch barrel features a 1-in-9-inch right-hand twist, which stabilizes most .223 loads quite well. The barrel of the Tactical also sports a flash hider, a big plus when firing in low light environments.

Ruger makes both 5- and 20-round magazines for the Mini-14. Aftermarket magazines that boast even higher capacities are readily available. A paddle-style magazine latch is positioned just to the rear of the magazine well. In order to release the magazine from the rifle, the latch must be pressed to the forward position.

Operation of the Mini-14 is very straightforward and its manual of arms is a study in simplicity. To load up, first place the weapon on “safe” and point it in a safe direction. Next, retract the bolt to the rear and lock it open by depressing the bolt lock plunger. Insert a loaded magazine, run the bolt forward to chamber a round, and you are good to go. Pushing the safety forward and pressing the trigger will fire the gun. To unload, simply reverse the process. Once again, point the rifle in a safe direction and make sure it is on “safe.” Depress the magazine latch and remove the magazine from the rifle. Run the bolt to the rear to clear the chamber. Finally, depress the bolt lock plunger to lock the action open and visually and physically inspect to verify an empty chamber.

Shots Fired
The Mini-14 Tactical was evaluated over the course of several months and did not disappoint. After cranking off a few shots to break the ice, I mounted the Aimpoint Micro and zeroed the rifle in short order. Time constraints didn’t allow for anything other than a quick sight-in at the initial session, but I discovered this Mini-14 had greater accuracy potential than others I had fired in the past.

My next experience with the Tactical rifle was at a firearms instructor conference. I took the big plunge and opted to use the mini as my demonstration piece while teaching a trio of CQB rifle classes. In short, the Mini-14/Aimpoint didn’t let me down and allowed me to perform in fine style throughout my classes.

Over the next few weeks, I broke the rifle out a few more times and it continued to deliver the goods. I was becoming a believer! On a bright December day, I felt the time was right and it was time to get down to some serious business. So off to the range we went, along with my chronograph and an assortment of .223 ammunition. On the plus side, the temperature had climbed to an unseasonably warm 55 degrees Fahrenheit. The wind, however, didn’t cooperate and was cranking a steady 20 knots with higher gusts.

Well, so much for the best laid plans. Instead of abandoning this adventure, I sought out a lee from the wind behind the range shed. I wouldn’t be able to shoot 100 yards, but I could scratch out 50 yards and see what this Mini could do.

Shooting off an Uncle Bud’s Bulls Bag, most 5-shot groups ran between 1 to 2 inches. Sure, I know it’s only 50 yards, but with the wind, I still felt this was darn good. My best efforts were realized with Federal’s 55-grain Nosler Ballistic, which posted an average spread of an inch. Hornady’s 55-grain TAP load and Black Hills 77-grain HP also turned in good results.

A week later, I was able to assess long-range performance by sniping away at a small, steel swinging target set 100 yards distant. From a stable sitting position, I merely painted the steel swinger with the red dot of the Aimpoint and pressed the trigger. As long as I held up my part of the bargain, the result was a hit. I was also able to print some sub-2-inch groups with Black Hills 77-grain HP at this distance.

In summary, there really wasn’t anything I could take issue with while putting the Mini-14 Tactical through the paces. It proved to be both accurate and reliable and that’s all I can ask for.

Final Thoughts
If you haven’t tried out a Mini-14 lately, you owe it to yourself to check out the new generation of this self-loader. My past grievance was that the Minis weren’t nearly as accurate as competitive designs. That apparently has been resolved.

One piece of support equipment that I took a fancy to while testing the Mini-14 was the Patrol Bandoleer from Eagle Industries. The M4/9mm version of the Patrol Bandoleer holds up to four rifle magazines plus a pair of hi-cap pistol magazines. Magazines are secured by flaps with hook n’ loop fasteners. This compact pouch is equipped with a shoulder strap and gives the patrol officer access to extra ammunition when responding to a hot situation.

Today, many agencies are considering the concept of a patrol rifle as either a supplement or replacement to the shotgun. From what I have seen, the Mini-14 Tactical could certainly fill that role. Other models optimized for law enforcement are also available from Ruger.

It looks like this re-born Mini-14 is ready to get up and run with the big dogs. This upgraded package should make the Mini-14 a viable contender for law enforcement applications in the years to come.