After blowing up a supposed “auto-rated” suppressor with an M16, I went on a trek to find one that would not have an unscheduled and surprising demise. My research found numerous roads leading me to Rugged Suppressors.

I called the company and spoke to Michael Derdziak, one of the two owners, and explained my woeful history with the suppressor that did not live up to its hype. He assured me that Rugged’s centerfire suppressors are up to the task of M16 magazine dumps as they are not just auto rated, but are also belt-fed rated, from up to .300 RUM. As such, they are durable enough to handle sustained fire. Sounds just like what I was seeking! 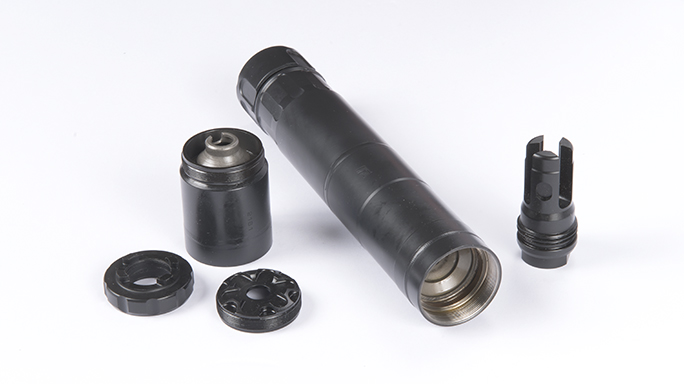 I received a Rugged Surge 7.62 for testing. The Surge has Rugged’s ADAPT Modular Technology, meaning that it is a two-piece suppressor, allowing the user to remove a portion for a shorter and lighter-weight suppressor. In essence, it’s two suppressors in one. This not only makes the Surge adaptable, but you only need one tax stamp. The Surge ships with a 7.62mm front cap and a flash suppressor mount. Both can be interchanged with 5.56mm versions.

The Rugged Surge’s tube and mount are manufactured from 17-4 stainless steel. The baffles—and here is where it gets interesting—are made from Stellite. According to Rugged’s website, “Stellite exhibits unparalleled hardness and toughness as well as an extremely high melting point due to its cobalt and chromium content.” It extends the life of your suppressor by negating the effects of erosion wear when compared to Inconel or stainless steel baffles.”

Stellite handles heat better than titanium, which accounts for Rugged’s ability to rate its rifle suppressors for belt-fed use. You may be like me and have not heard of Stellite, but it is currently used in M2, M60/MK43 and M240 barrels and boasts an 80-percent service-life increase over chrome-plated barrels.

Rugged’s Dual Taper Locking System is designed to eliminate wobble using constant spring pressure on the rear taper. This keeps the mount securely locked during repeating healing and cooling cycles. In terms of manufacturing, all of the machining is done in-house. The Rugged’s mount, the component that takes the most abuse, is not made from tube stock—rather, it is machined bar stock.

Every rifle suppressor is test fired for accuracy and point-of-impact shifts. As a testament to their durability, Rugged Suppressors offers an unconditional warranty: “If for any reason you have an issue with a Rugged Suppressors product, we will repair or replace it free of charge. Period. Even if you drop it from a mountain.” No small type, no restrictions, no time limit. You don’t see that level of confidence and customer support very often. 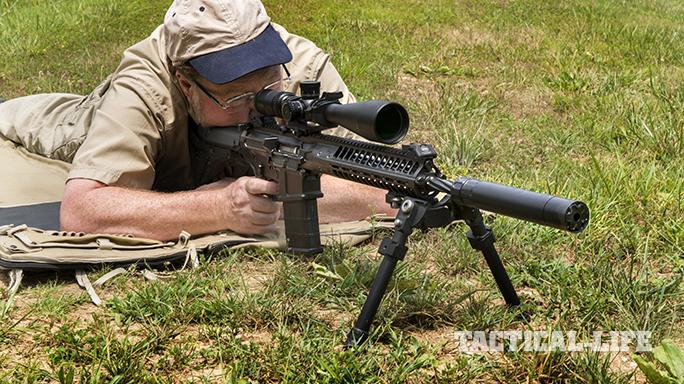 Range testing with the Rugged Surge on the LWRCI REPR MKII displayed the normal group drop. The drop happens anytime you add weight to the end of a barrel. The drop distance is dependent on the weight of the suppressor, barrel profile and barrel length. The group sizes and point of aim weren’t affected. It was the perfect addition.

Rugged suppressors are strong enough for belt-fed machine guns and accurate enough for precision shooting. Regardless of which you model you pick, you won’t go wrong Rugged Suppressors’ accuracy, durability and warranty.