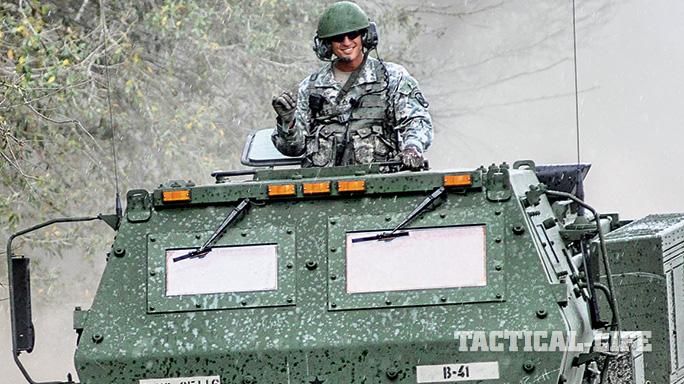 1 of 3
Hardcore Protection: Saint-Gobain Synthetic Sapphires
The Army’s HIMARS are being retrofitted with windows of pure sapphire. 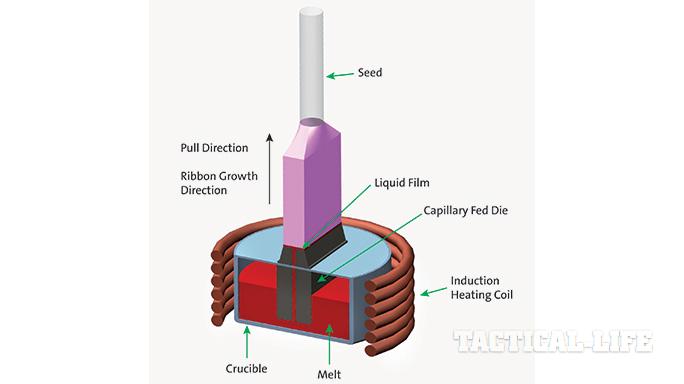 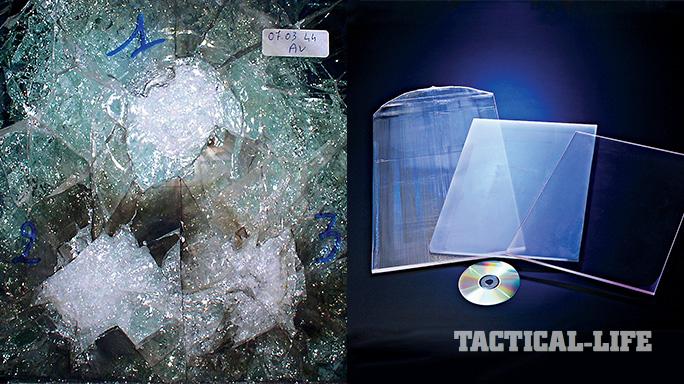 3 of 3
Hardcore Protection: Saint-Gobain Synthetic Sapphires
The Army’s HIMARS are being retrofitted with windows of pure sapphire (right) that can withstand several hits from a Dragunov, for example, without giving way (left). 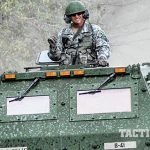 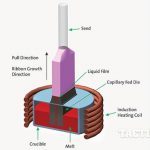 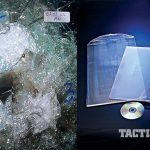 In their natural state, sapphires are globally recognized as beautiful, lustrous precious stones, often brilliantly blue, used in expensive jewelry. In fact, the remarkable colors in sapphires are evidence of impurities in the aluminum oxide crystals that form the stones. Pure sapphire, like the best diamonds, is clear as glass.

Clear sapphire is never found in nature, but it can be produced synthetically. Although the manufacturing process is complex, synthetic sapphires have many important applications because they are very hard, chemically inert and virtually impervious to damage.

“Synthetic sapphires, made from aluminum oxide, have a lot of unique characteristics that make them a great choice for applications in military and other markets requiring exceptionally hard material,” explained Russ Wooddell, program manager at Saint-Gobain Crystals in Milford, N.H. “Only diamond is harder than sapphire. If you want to cut it, you have to use either sapphire or diamond. Because it’s so hard, a single sheet of sapphire ceramic makes great transparent armor, replacing several layers of glass in a typical solution, with less than half the weight and no reduction in ballistic protection.”

Wooddell and his team are responsible for producing the bulletproof windows being retrofitted in the U.S. Army’s M142 High Mobility Artillery Rocket System (HIMARS). In service since 2005, the HIMARS is the mobile version of the Multiple Launch Rocket System (MLRS), with a six-rocket launcher or a single Army Tactical Missile System (ATACMS) missile towed by the Army’s Family of Medium Tactical Vehicles (FMTV) 5-ton truck. HIMARS can be transported in a C-130 cargo aircraft, and it can deploy into areas previously inaccessible to heavier launchers, including Iraq and Afghanistan, where the system was utilized effectively in combat for the first time.

“Synthetic sapphires have many important applications because they are very hard, chemically inert and virtually impervious to damage.”

Because the HIMARS operating crew rides in the cab of the FMTV truck, they are obvious targets for enemy sharpshooters bent on neutralizing the missile system by neutralizing the people who fire them and operate the system. Providing ballistic protection for the crews is critical, and synthetic sapphire is a significant improvement over conventional bulletproof glass.

The task of providing this important upgrade fell to Saint-Gobain Crystals, a division of Saint-Gobain, a French multi-
national corporation specializing in construction and high-performance materials. Its extensive operations in North America include the Crystals Division, focused on the design and production of crystal-based technology for radiation detection, optics and sapphire components for semiconductors and other industrial, aerospace and defense applications.

Synthetic sapphire production, especially in the sizes required for vehicle windows, is remarkably complex. After decades of independent research and development, Saint-Gobain in Milford originated the breakthrough manufacturing techniques that lead the industry and enabled the material’s use as transparent armor for the first time. In addition to the HIMARS production program, Saint-Gobain also supplies sapphire windows for the Electro-Optical Targeting System (EOTS) used in the Joint Strike Fighter program, the new combat aircraft in development for the U.S. Air Force, Navy and Marine Corps. The company’s expertise led in October 2012 to a three-year, $20 million contract to provide enough replacement windows for 540 HIMARS vehicles in service in the U.S. Army, Army National Guard and Marine Corps. Saint-Gobain marked delivery of the 1,500th set of armor windows for the rocket system in February 2015. Appropriately, the first recipient of the new window retrofit, delivered earlier, was in the Milford plant’s home state, a rocket system unit serving with the New Hampshire National Guard based in Nashua.

Wooddell’s team produces 1-by-2-feet sapphire sheets. While this doesn’t seem impressive, it’s worth noting that they are the largest in the world. Complex manufacturing techniques make production of sapphire sheets of more than a few square inches exceptionally difficult, and producing large sheets in high volumes is exponentially more difficult.

“We grow synthetic sapphire with a technique known as Edge-defined Film-fed Growth (EFG). It’s truly impressive to watch, even for those of us who have witnessed it many times,” said Wooddell. “To produce the sheets, we fill a crucible, a container that can withstand very high temperatures, with molten aluminum oxide. The liquid is about 2,000 degrees Celsius, or 3,700 degrees Fahrenheit.

“A die about 12 inches wide, used to shape the sapphire, is placed in the crucible, and it mimics the thickness of sapphire crystal,” Wooddell continued. “As the molten aluminum oxide pools at the top of the die, a sapphire seed is lowered to the molten pool and is then pulled back up. This pulling actually freezes because of the temperature differential and enables extraction of a crystal about 2 feet long. The EFG process grows crystal in near net shape, so minimal cutting and polishing to make it perfectly clear are needed. Other processes may be less expensive, but they require a lot more post-production fabrication. We complete sheet production in a few days, not several weeks.”

Obviously, sapphire production has come a long way. Originally, small sheets of the material were used on scanners in grocery stores because constant swiping wouldn’t scratch sapphire, enabling barcode readers to work effectively. As the size of sheets grew, the material was in demand for the windows of targeting systems, once again because of its clarity. In fact, its optical properties are one of sapphire’s strongest selling points. Infrared transmittance through sapphire is particularly good, making it very effective when using night-vision goggles (NVGs) or infrared cameras.

“After a good deal of research, we were able to validate large-sheet sapphire in the mid-1990s,” Wooddell explained, “but we proved it for transparent armor applications only about six or seven years ago. We were the first company to commercialize any advanced ceramic material for transparent armor.”

Wooddell added that the sapphire sheets are bonded with other layers of glass and polymer interlayers to make bulletproof panels. Sapphire is used as the strike face for windows because its hardness literally breaks bullets apart when they hit it, shattering the hardened steel cores of bullets into small pieces. The layers behind the sapphire absorb energy from bullet strikes, eliminating damage from shock.

“We talk a lot in terms of STANAG protection levels,” said Wooddell. STANAG is a NATO standardization agreement that establishes performance effectiveness levels for various types of protective armor used by Allied military forces. “Sapphire’s performance is excellent at lower levels with 5.56mm projectiles, the most commonly used ammunition today. As the threat gets closer to .50 caliber, used in heavy machine guns and some long-range sniper rifles, the material performs even better compared to a glass-only solution. Sapphire panels can take many high-threat strikes and survive, although its surfaces may crack. It doesn’t create spider webs with lots of cracking, although layers of glass behind it may break after repeated impacts.”

Despite the current 1-by-2-feet size limitation, several pieces can be put together, side by side, and they work well with no degradation in ballistic protection. If one panel is damaged after multiple heavy-caliber hits, cracks do not propagate across panels even when they are adjacent.

Enhanced protection is, of course, most meaningful for the people who benefit from it: the troops who operate the HIMARS. In addition, the clarity sapphire provides makes operation of the HIMARS vehicle safer in both threat and non-threat environments, enabling drivers and passengers to see better through windshields and windows with minimal maintenance requirements, translating into more efficient use of the system.

These capabilities are a source of pride for Wooddell and his team in Milford, which has grown by 30 percent since the company won the Army contract in 2012. “Protecting our military personnel is a tremendous responsibility, and we take it seriously,” Wooddell commented. “It’s really thrilling for everyone in our company to see our years of research and development pay off in ways that keep our troops safer and enable them to perform more capably. We are looking forward to completing our contract and hope that it will lead to even more uses for sapphire in military vehicles and other systems.” 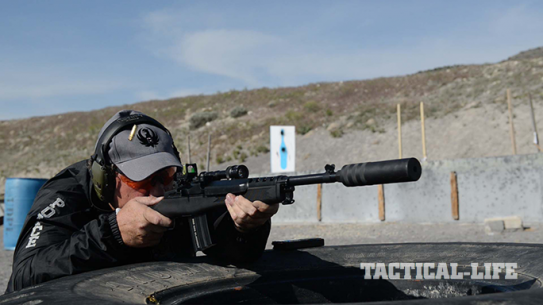