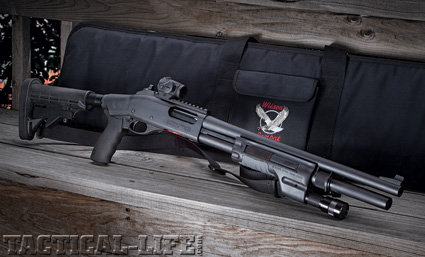 There was a day when customizing a shotgun meant sawing off the barrel (either double-barrel or pump), sawing off the stock into a pistol grip or both. The idea was to make the 18- or 20-inch police “riot gun” more tactical. The modifications seemed sound, that is until you fired a short-barreled double or pump or a pistol-gripped version. Notions of a sawed off shotgun being an alley sweeper were soon dispelled when you found out that without sights or aiming, you can actually completely miss a target at realistic combat ranges. Despite the lack of accuracy when bead or rifled sights were removed, pistol grips are not fun to shoot with full-powered street loads. All of a sudden, those saw-delivered “tactical” modifications weren’t such a good idea after all. 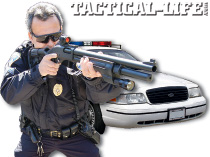 Shotguns have lagged behind with street or combat-enhancing design changes. Let’s face it, carbines have been getting all the attention with improvements in design and available accessories. That’s too bad, as a 12 gauge shotgun loaded with 00 buck or rifled slugs can be a devastating fight stopper. Shotgun-fired buckshot or slugs can be devastating against a human body – with the ballistic ability to create massive trauma.

Slugs and 00 buck can literally avulse (tear off sections of a suspect’s body) with impressive results. Case in point: I once responded to two shootings at the same housing project apartment. In the first shooting, a 16-year-old dope dealer was shot in the leg with a 9mm pistol round. Upon arrival, said doper was sitting on a sofa waiting for EMS. An entrance and exit wound were visible with minor bleeding observed.

One month later, same apartment/same doper got shot in the same leg with a 12 gauge but the resulting blood and gore were all over the hallway and the leg sustained so much damage that it had to be amputated. Considering that most suspects are stopped via blood loss (and resultant drops in blood pressure and heart rate) the bigger the hole, the more blood loss results and the quicker the stop in aggressive action. 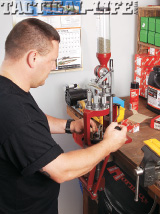