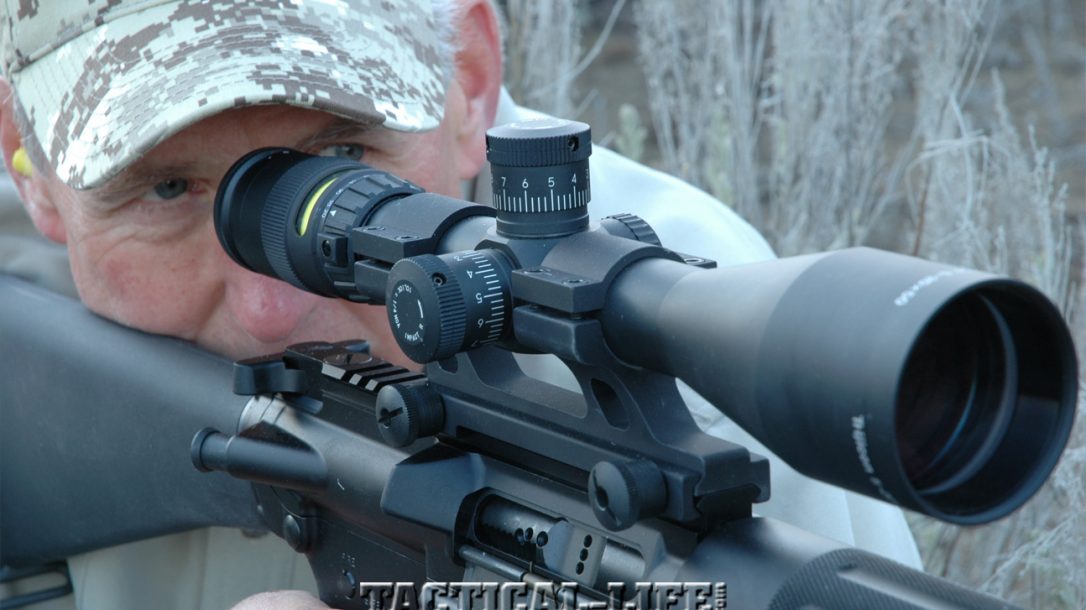 Turn the dial, and the image shrinks or grows. You get 2.5X magnification or 5X. Nothing in between. The dial is on the turret. This scope attracts people attracted by strange devices. Why would anyone change magnification in a sight?

That was a fair question in the days of steel-tubed scopes and uncoated lenses, when glass fogged in wet weather and spider-web reticles moved off-center when you spun windage and elevation dials. The 3-9X scope with an infinite range of power choices followed in time, wooing hunters from 2.5X, 4X and 6X sights. As optical improvements made scopes practical on just about every repeating rifle, new choices in power arrived. In all variable scopes, top magnification was roughly three times the bottom. These “3-times” scopes satisfied shooters for decades.

Then, about the time pricing began to catch up with advances in scopes, 4-times magnification came along. Hence, the 1.5-6X, 3-12X and 4-16X. Some showed up in bigger 30mm tubes. Then, in 2007, Swarovski introduced the Z6, a 30mm scope with 6-times range. I snared a 1.7-10×42 and installed it on a Cooper 54 rifle in .250 Savage. At nearly 17 ounces, it’s heavier than the scopes I typically use for hunting, but the images are brilliant and needle-sharp. It nestles nicely into low rings and has enough free tube for easy mounting on a variety of receivers. Eye relief is a generous 3.7 inches (an EE, or Extended Eye version offers 4.7). Field of view in the Z6 is greater than you might think. The 2-12X, for example, not only has a wider field than a 3-12X at the low end; you get more field at 12X too!

The Weight Issue
“Why do scopes get heavier when you stretch the magnification range?” I figured Mark Thomas would know. An optical engineer, he’s worked on night-vision and avionics devices. After a decade at Leupold, he founded Kruger Optical in Sisters, OR, where he and his staff design scopes and assemble prototypes, filling “scope orders of 500 or less.” And they fashion products manufactured in quantity overseas for private labels. Mark has designed “more than 300 riflescopes” and patented a three-cam optical system that reduces disturbing changes in eye relief in short-tube, wide-range variable scopes.

“As you increase range of magnification, you must add components. Think complexity as well as ounces,” Mark replied. “Some of those components are lenses to correct for aberrations that appear as you make each lens work harder. Adding glass to most sights, you must make the erector assembly longer. So the main tube must be longer too. Chalk up more ounces. Then, to ensure a useful range of windage and elevation adjustment with the longer erector, you increase main tube diameter. You can then make erector lenses bigger to boost resolution and field, or leave them of standard size for more elevation adjustment.” Mark added that unconventional designs can dodge some compromises, “but they bring others.” The 1-8X scope we designed for tactical use is essentially a red-dot sight and a riflescope in one unit. The shooter gets both in a single sight window. But this scope would look out of place on a classic sporting rifle, and many shooters would find its trade-offs unappealing.”
Among trade-offs in many wide-range variables is optical quality. “Keeping that bar high is a real challenge in a short tube with a big aperture.”
Rick Regan, a supervising engineer at Leupold, and Lance Scrivens, who designs new products there, agrees. “At 5- and 6-times magnification, aberrations become an issue. It’s harder to maintain sharp focus and keep parallax error at bay. Vignetting becomes a problem at the low end. You can chase some of these gremlins with extra lenses (multi-coated, of course) and expensive aspherical glass. But all that manipulation adds cost, in design, materials and manufacture.”

The Price Factor
Cost. Is that the reason 3-, and later 4-times, magnification satisfied shooters for so long? “Not really,” said Lance. “Until recently, no one built commercial riflescopes with broader ranges. When they did appear, after Albert Fideler’s work at Swarovski, prices kept some shooters out of the market. But as other companies jumped in with competing scopes, and promoted them, many shooters decided the 5- and 6-times ranges were worth the premium.”

Rick explained that manufacturing hurdles delayed the introduction of such sights. “Tolerances in a scopes are very tight: plus or minus half a thousandth
for cams in the erector assembly.” Old machining methods couldn’t hold those tolerances as lens movement increased to accommodate wider power shifts. “Lenses in a 6-times scope travel about twice as far as in a 3-times system,” Rick said, “so variation in parts has twice the effect on the image. Trying to keep 4 inches of movement within half a thou’ turns hair gray!” The complex systems that yield 5- and 6-times magnification ranges are as difficult to design as they are to manufacture, says Mark Thomas. “One reason these scopes have proliferated is that we now have the software to quickly bring new ideas to a computer screen. That’s as big a development as CNC machines that cut to snug tolerances.”

Did shooters demand these scopes—or did the industry build them as they became practical to build, and then puff them up to consumers? “Rifle enthusiasts are always looking for better sights,” Rick observed. “Leupold works hard to stay ahead of the curve. The Vari-X II had a long life. But now we have the VX-III, with Quantum lenses and coatings, including Diamondcoat. Elevation dials matched to loads, and illuminated reticles are options. Shooters want it all. Wider power range is just another step.”

The Changing Tide
Mark Thomas concurs. “Riflescopes with state-of-the-art optics have supplanted sights that satisfied legions of hunters since the 1950s. Wider ranges could force some current scopes out, reducing catalog listings or SKUs (stocking units). A leaner, more profitable business results.” His own pick for a hunting scope: 2.5-10×50. “I like the generous eye-box that comes with a big exit pupil.”

Dean Capuano, who heads U.S. marketing efforts for Swarovski, told me the Z5 is selling briskly, with the bigger, more costly Z6 not far behind. “Our engineers in Austria continue to push the envelope in riflescope design. The Z6, for example, comes in an illuminated version, with 64 brightness settings and an automatic shut-off. We thoroughly test our scopes, but we work hard to be first to market with useful innovations. Swarovski’s 5- and 6-times power ranges have nudged competing scope-makers out of their 3- and 4-times ruts.”

High prices are not as off-putting to the Swarovski faithful as much as they are to shooters shopping on the cheap. But every manufacturer is keenly aware that new features make scopes less affordable; and not all hunters will pay extra for a power dial with more numbers.
Then again, someone probably said that when turrets offered a choice of 2.5X or 5X. 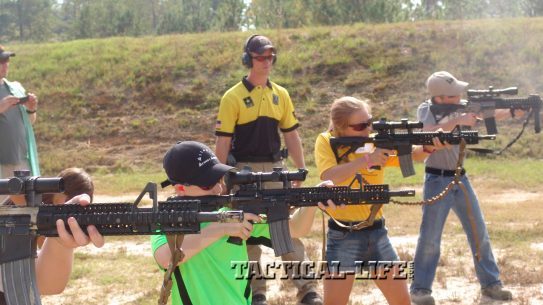 Turn the dial, and the image shrinks or grows. You get 2.5X magnification or…