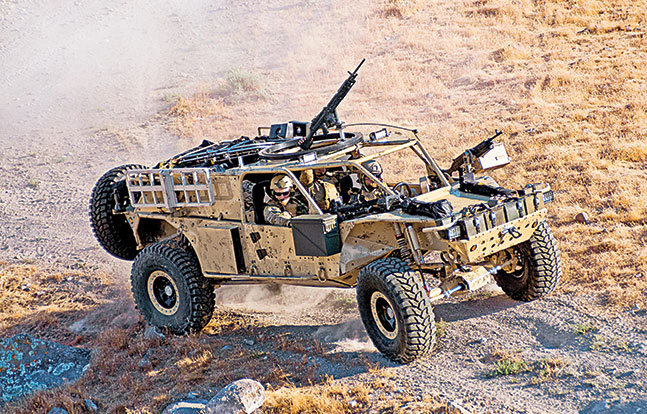 1 of 6
Search and Rescue with the All-Terrain HDT Storm
The HDT Storm SRTV vehicle features a powerful, mid-mounted engine that provides 430 brake horsepower as well as a suspension system that enables it to handle very steep grades in rough terrain. 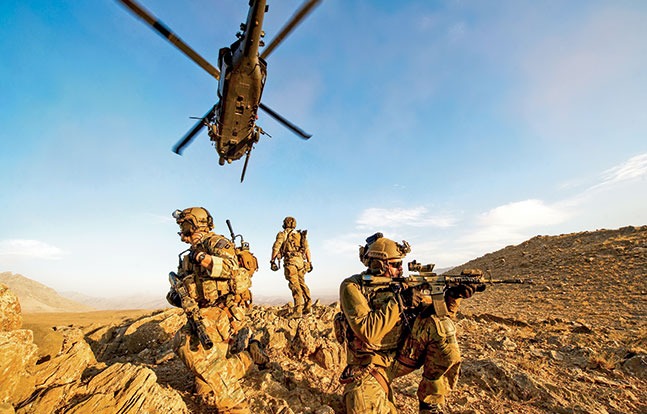 2 of 6
Search and Rescue with the All-Terrain HDT Storm
U.S. Air Force Pararescue specialists typically use helicopters like Chinooks (above) or Pave Lows (inset) to fast-rope into an area and find downed operators. 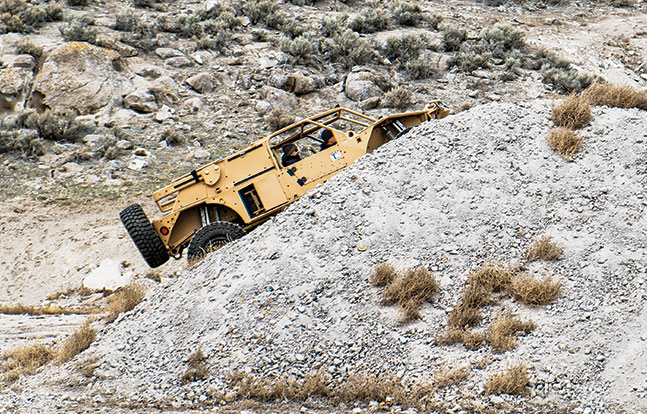 3 of 6
Search and Rescue with the All-Terrain HDT Storm
The HDT Storm SRTV vehicle features a powerful, mid-mounted engine that provides 430 brake horsepower as well as a suspension system that enables it to handle very steep grades in rough terrain. 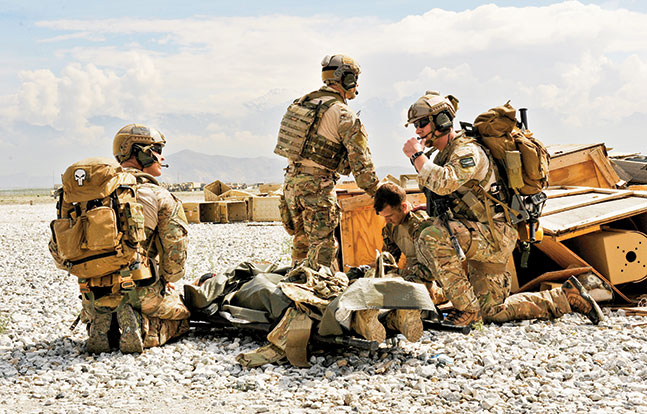 4 of 6
Search and Rescue with the All-Terrain HDT Storm
U.S. Air Force Pararescue specialists wait to be picked up after treating casualties. This is a role the fast and agile HDT Storm vehicle could fill. 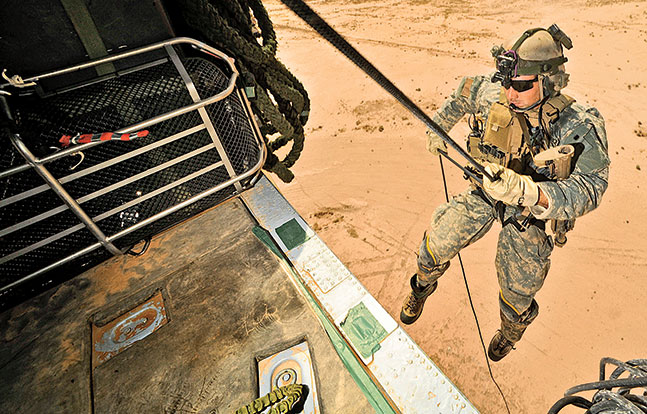 5 of 6
Search and Rescue with the All-Terrain HDT Storm
Pararescuemen are typically inserted into an area by fast-roping from a helicopter. The Storm will expand the mission radius of Pararescue operations by working with rotorcraft that may not be able to penetrate enemy air defenses. 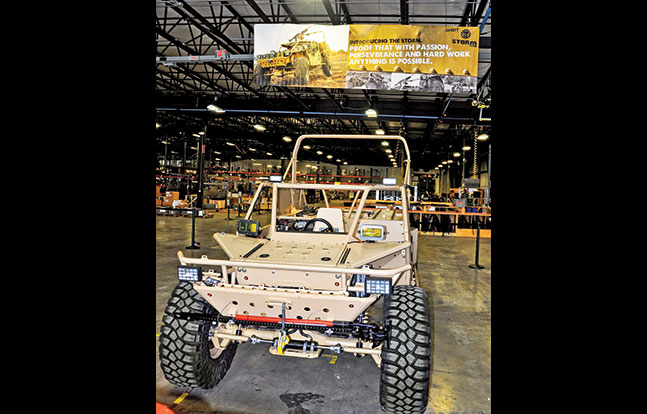 6 of 6
Search and Rescue with the All-Terrain HDT Storm
HDT Global displays the 100-mph-capable Storm SRTV at its roll-out ceremony. Its tubular frame can protect the crew from rollovers. 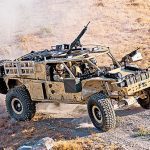 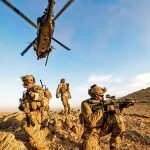 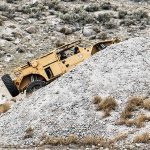 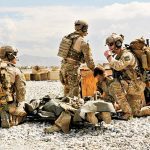 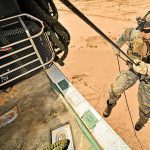 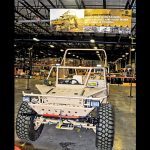 For more than a decade, the U.S. Armed Forces have engaged in asymmetric warfare, fighting non-state-based criminal or political insurgencies in the developing world. One aspect of these conflicts is counterintuitive. Although much of the fighting involves air strikes from nimble unmanned aerial systems and limited ground operations by highly mobile special operations forces, many support vehicles have grown in size, armor protection and weight to counter improvised explosive devices (IEDs) that have accounted for more than half of the U.S. casualties in regional operations.

Muscle-bound MRAPs and other armored platforms are slow and cumbersome. Increasingly, tacticians argue that lighter vehicles can be effective by utilizing speed, maneuverability and versatility as protective measures. This is leading to a new breed of military vehicle, reminiscent of the classic Jeep of World War II and the Korean War, and the Marine Corps’ MUTT in Vietnam.

According to Robin Stefanovich, HDT’s vice president of communications and director of business development for Special Operations Command (SOCOM) programs, several vehicle and engine design specialists helped create the Storm. Although the Storm resembles a stripped-down version of a Humvee, Stefanovich points out that the new vehicle, the product of collaboration with corporate partners, is not based at all on that vehicle.

“The HDT Storm began with the vehicle design and maximized performance through close collaboration with BC Customs of Clearfield, Utah, and EngineTec of Virginia Beach, Virginia.” Stefanovich explained. “BC Customs has honed its craft in rugged all-terrain vehicle design for more than 20 years with acknowledged expertise in designing and manufacturing custom desert racing vehicles. Since 2005, BC Customs has worked with special operations forces to develop a vehicle concept that facilitates mission success in austere environments and that answers the previously unmet challenges these warfighters face.

“The Storm SRTV expands Guardian Angel mission capabilities, enabling teams to reach casualties on the ground rather than by parachute or helicopter.”

The vehicle design was perfected without government support. “The HDT Storm was completed through independent research and development funding,” Stefanovich said. “Although the vehicle was purpose-built to support personnel rescue missions, it has also proven to be incredibly useful for scouting and reconnaissance missions. The vehicle’s modularity allows it to be quickly adapted to suit mission requirements in extreme environments and difficult terrain.”

The Storm SRTV expands Guardian Angel mission capabilities, enabling teams to reach casualties on the ground rather than by parachute or helicopter. Having a highly transportable vehicle expands the teams’ air asset operational radius. They can be dropped off on the ground beyond enemy defensive positions to move quickly to downed aircrew and other casualties for extraction out of harm’s way quickly and safely. While the Storm could be susceptible to ambushes or traps, its advantages may outweigh this concern by increasing options for mission flexibility, including the capability to carry plenty of useful gear.

The vehicle looks like a big, muscular dune buggy ready for a barroom brawl. It packs a lot of power into a compact frame to provide combat capability with ease of transport. It can easily drive up and down the ramps of all variants of the Lockheed C-130, including special operations models, and the C-17 transport aircraft for internal carry. While the SRTV is too wide to fit inside a V-22 Osprey, a smaller variant, the HDT Sword, is certified to fit inside of it. It can also be sling-loaded under CH-47 and CH-53 transport helicopters for low-velocity aerial delivery. In addition, the vehicle can be rigged for use with the U.S. military’s Joint Precision Airdrop System under parachutes when landing zones are not available.

“The vehicle looks like a big, muscular dune buggy ready for a barroom brawl. It packs a lot of power into a compact frame to provide combat capability with ease of transport.”

The Storm’s mid-mounted engine is exceptionally powerful, delivering 430 brake horsepower to provide plenty of speed and maneuverability in a vehicle with a curb weight of 4,320 pounds. This overmatch enables the Storm to operate with higher horsepower levels at 10,000 feet above mean sea level than other vehicles generate at sea level. These capabilities are a good substitute for armor, enabling the vehicle to outmaneuver or outrun potential threats. The wheelbase and suspension are long for the Storm’s size to optimize its approach and departure angles over steep aircraft ramps and rough terrain. The vehicle can turn in a 20-foot (6.1 m) diameter, and cutting brakes allow U-turns on steep grades within the Storm’s length and width as well as high-speed J-turns. The suspension package enables the Storm to manage extremely tough terrain, including vertical rocks, that is impassable to other less-capable vehicles.

The tubular, roll-bar structure over the cab protects the crew (usually three members in tactical search and rescue configuration) from rollovers. The interior also can accommodate up to three litters for casualty transport without further modification while maintaining a full 360-degree field of fire for pintel-mounted protective weapons, such as M240 machine guns or similar systems.

The Storm may have a bright future. U.S. Special Operations Command has a requirement for nearly 1,300 vehicles, and the platform can easily be adapted for more general military use. 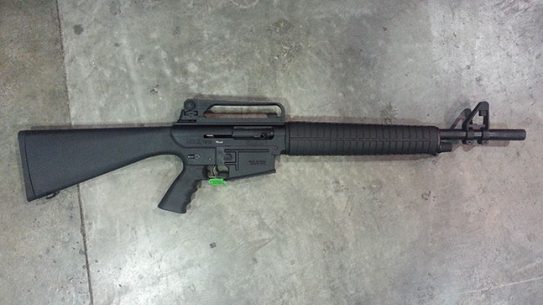