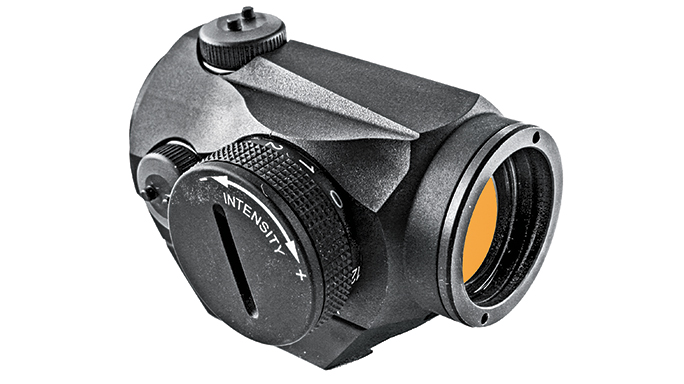 1 of 11
Aimpoint Micro T-1
The Aimpoint Micro T-1 is an excellent choice for a patrol rifle or shotgun due to its ruggedness, clear optics and features. Aimpoint offers the Micro T-1 with either a 2- or 4-MOA dot to match your needs. The integral Picatinny rail base allows for easy installation onto a long gun. With the recoil-absorbing mount, the sight weighs less than 4 ounces, yet it is highly impact resistant and submersible to 25 meters. It has eight daytime settings and four night-vision-compatible settings. It offers 50,000 hours of continuous use. 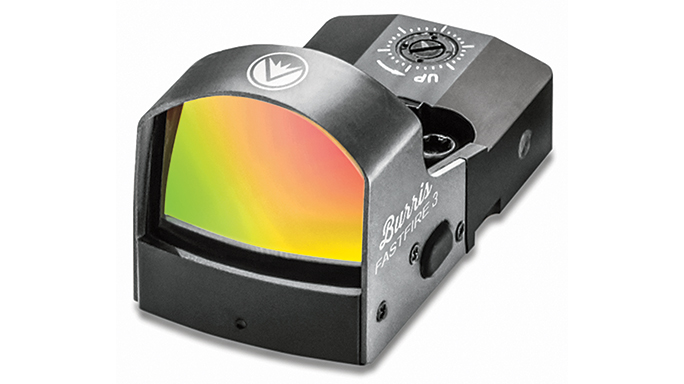 2 of 11
Burris FastFire III
Long known for its riflescopes, Burris also makes a line of fast-targeting reflex sights. The FastFire III is one such example. Designed for use on rifles, shotguns and pistols, the FastFire III can be had with either a 3- or 8-MOA dot. Burris built in an automatic brightness sensor that keeps the aiming dot at an appropriate level as ambient lighting conditions change. Also, there are three manual brightness levels. The FastFire III has no magnification and uses multicoated optics to reduce glare and improve low-light performance. 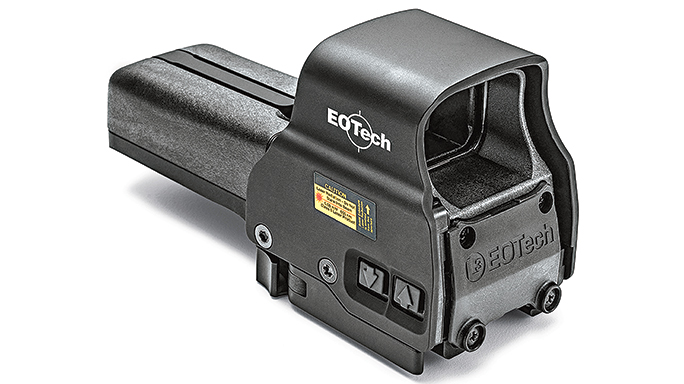 3 of 11
EOTech 518
EOTech makes a large line of holographic weapon sights for police officers, military personnel and armed citizens. Many of these models have been deployed and successfully served in multiple armed conflicts in recent years. The 518 will run for 600 hours on standard alkaline AA batteries. It has control buttons on the side of the sight body so adjustments can be made with an EOTech magnifier in place. Optional battery caps can add visible and IR lasers to the unit. The 518 is submersible to 3 meters and weighs 13.8 ounces. A quick-release base comes standard on the 518. 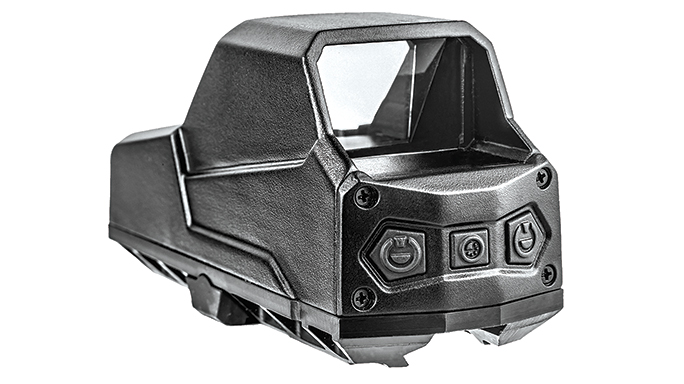 4 of 11
Hartman MH1
Hartman MH1: Developed by Mikey Hartman, who served in the Israeli Defense Forces as a commander for 20 years, the MH1 is a reflex sight designed with the needs of modern law enforcement officers and soldiers in mind. The sight is adjustable from both the unit and a remote switch. The reticle has 10 adjustment levels that include night-vision-compatible modes, and the reticle is completely invisible from the front of the gun. A built-in battery charges via a micro USB port and is backed up by a CR123 battery. Motion sensors power down and instantly activate when the gun is brought up to fire. 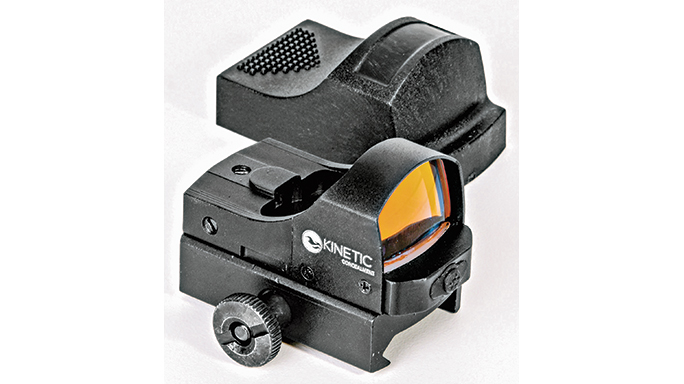 5 of 11
Kinetic Concealment RD-01
The new Kinetic Concealment RD-01 promises to bring rapid targeting to your rifle at a fraction of the price of other optics. The RD-01 uses a multicoated lens to improve optic clarity. Four levels of brightness are available for the red dot, and a single CR 2032 battery powers the unit. The RD-01’s housing is made from 6061-T6 aluminum with a black anodized finish for durability. The RD-01 is compact at only 2 inches long, and it weighs 2.2 ounces with a battery. 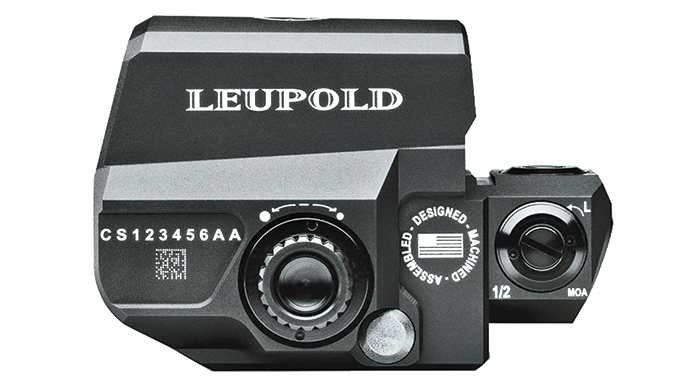 6 of 11
Leupold LCO
The Leupold Carbine Optic, or LCO, is a no-magnification reflex sight built for officers running a modern patrol rifle like the AR-15. With 15 brightness settings, the dot can be quickly adjusted to contrast well against ambient lighting conditions. Lower levels of intensity are designed for night-vision compatibility. Leupold uses a 1-MOA for precise shots at close and long ranges. Adjustments are made in 0.5-MOA increments. A single CR123A battery will power the LCO for up to five years. The body of the unit is machined from 6061-T6 aluminum and is waterproof. 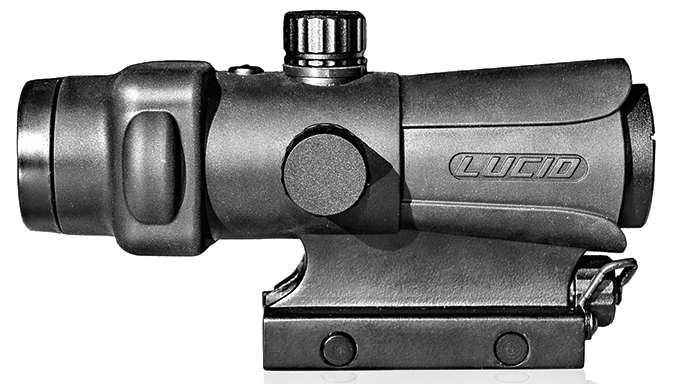 7 of 11
Lucid HD7 Gen III
Made with a cast-aluminum frame and covered by a chemical-resistant rubber shell, the Lucid HD7 Gen III is a red-dot designed for hard duty. Tested with loads like the .458 SOCOM, the HD7 should provide an affordable 1X sighting system that is tough enough for most applications. Powered by a single AAA battery, the HD7 has seven brightness levels and an auto shutoff feature. The HD7 is waterproof, fogproof and weighs 13 ounces. Options include a 2X magnifier and a quick-detach mounting kit. 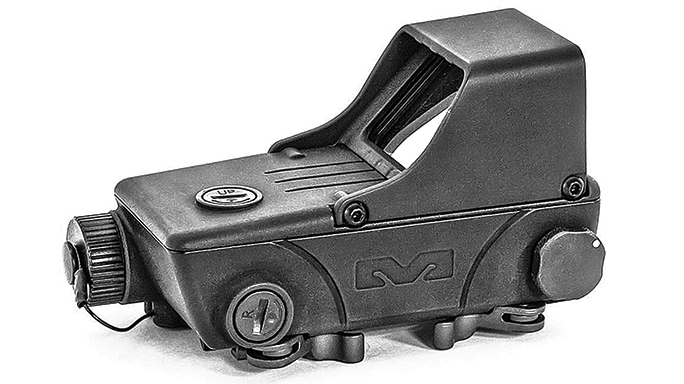 8 of 11
Meprolight Tru-Dot RDS
Lightweight, the Meprolight Tru-Dot RDS optic uses a 1.8-MOA dot for precision aiming at all distances. The Tru-Dot RDS has four different brightness levels, plus it is compatible with Gen II and Gen III night-vision units. Additionally, it works well with a variety of magnifiers. It operates on a single AA battery that can provide thousands of hours of use. Built-in sensors allow the unit to shut off when not in use and instantly activate when needed. Meprolight seals the unit to make it dust, dirt and water resistant. An integrated Picatinny rail makes mounting very easy. 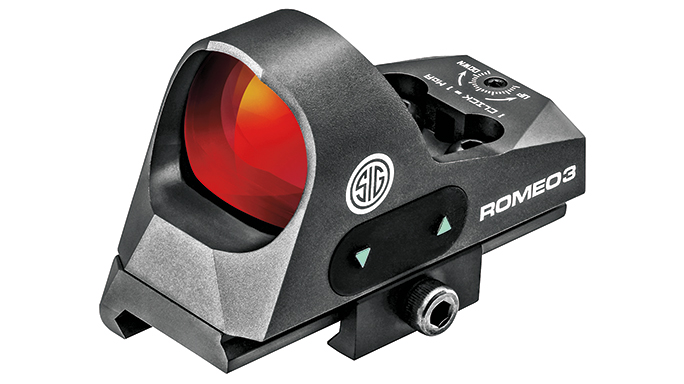 9 of 11
Sig Sauer Romeo3
Sig Sauer designed the Romeo3 for a wide range of fighting guns, including patrol rifles, submachine guns, shotguns and even full-size duty pistols. A 3-MOA dot is used in conjunction with a special red notch reflector to provide a bright aiming point without obscuring the target in longer engagements. A total of 11 illumination levels are available, with two being night-vision compatible. SIG uses a motion sensor in the optic to automatically activate and turn off the unit to save battery power when stored. Waterproof, fogproof and shock resistant, the Romeo3 is also available with a 1.41-inch co-witness Quick-Detach riser mount.

10 of 11
Trijicon MRO
Trijicon is no stranger to building durable sights for the world’s harshest environments, and the Miniature Rifle Optic (MRO) is a perfect example of the expertise and experience the company builds into its gear. The MRO has an ambidextrous brightness control, multiple night-vision-compatible intensities and will run constantly for five years on one tiny battery. Forged of rugged 7075-T6 aluminum, the MRO housing is built like a tank yet weighs roughly about four ounces. Additionally, the Trijicon MRO is sealed to keep out water down to thirty meters. 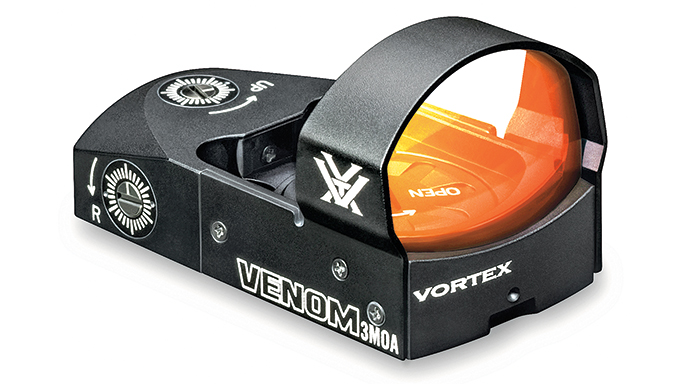 11 of 11
Vortex Venom
Designed for fast target acquisitions on both rifles and shotguns, the Vortex Venom is a red-dot optic that mounts quickly and offers a clear field of view. The 3-MOA dot is large enough for rapid targeting at close ranges but doesn’t unnecessarily obscure the target at longer distances. The Venom body is machined from aluminum while the glass is multicoated for improved vision. The Venom is very light—a mere 1.1 ounces. A single CR1632 battery powers the unit and is replaceable without having to remove the optic from the gun. Vortex offers a fully transferable, unlimited, unconditional warranty on all of its products, which is about as good as you can get. 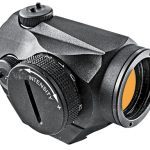 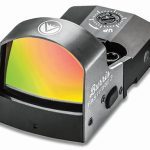 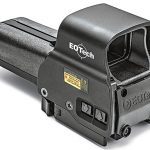 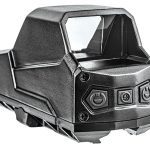 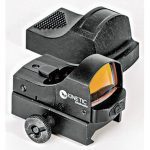 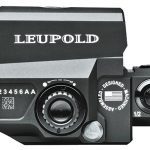 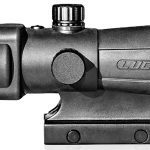 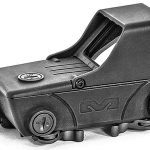 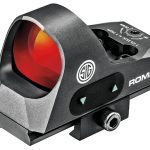 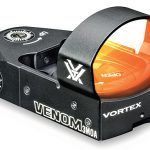 Few things have impacted a police officer’s ability to put accurate rounds on target like the development of lightweight reflex sights.

Also called “red-dot optics” by many people, there are a variety of different technologies used to make these kinds of sights. Not all of the technologies are true reflex sights, but the implementation is similar enough that the engineering is largely invisible to the end-user. Holographic weapon sights are a form of sight that also falls into this category.

In general, red-dot sights are non-magnifying and place a simple dot or other image in the shooter’s field of view. There is no need to try to align iron sights with the target or transition to irons on a scoped gun when the target is close. Near or far, the bullet will strike wherever the dot is. The point of impact is still affected by bullet drop, of course. Many have called this the ultimate point-and-click interface.

Scroll through the gallery above for a number of red-dot sights that you and your department may want to consider for your long guns. All are suitable for use on patrol rifles, while some are also good choices for mounting on shotguns.

For more information on the red-dot sights mentioned in the gallery above, please visit the following websites: 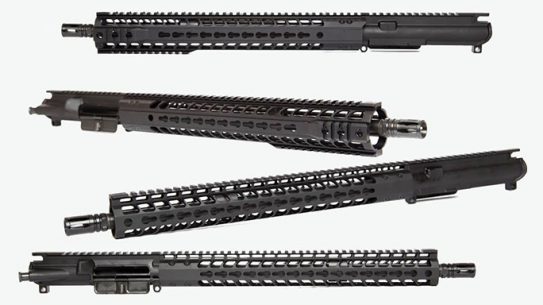 The all new 6.8 Upper from Radical Firearms is a MILSPEC 16-inch flat top...