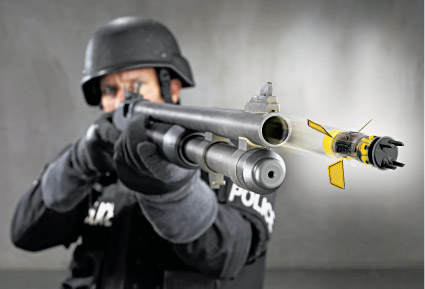 Whether you are dealing with a 90-pound suicidal teenager with a knife to her wrist, a mentally ill subject off his medication, or a 230-pound violently resistive suspect during a narcotics search warrant; Tasers work; no less-lethal device or chemical agent can compare— not one.

It was not always as easy or as successful. In days before Taser, we relied on batons and then, in the late 1980s, OC pepper sprays (Oleoresin Capsicum). Even today we have the tackle and “polyester pile” (multiple officers tackling and piling on a suspect). But the baton usually leads to suspect injuries, pepper sprays at their best are only about 80% successful and hands-on physical force frequently leads to officer and suspect injuries. Even early stun gun designs were only about 50% successful. But the Taser (with its 90%-plus success rate) reigns supreme amongst less-lethal force applications. Without further ado, let’s take a closer look at the new amazing electronic devices and where Taser International is going in the future. 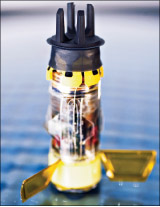 New Cutting-Edge Taser Technology
Never a company to rest on its laurels, Taser International has recently announced new technologies for law enforcement and the military. These products are in various stages of field-testing and development.

XREP (eXtended Range Electronic Projectile) will be field tested by Taser in this country. The XREP is a self-contained Taser projectile that can be fired from a standard 12-gauge shotgun. At the heart of the XREP is the “engine” which, according to Taser, produces the same energy output as the X-26 in a package that is less than one cubic inch in size and only weighs 2.4 grams. The projectile, which is encased in an opaque shotgun shell, has three fins that deploy after firing to stabilize the XREP in flight. With a reported velocity of 300 feet per second (fps) the projectile is accurate out to 100 feet. The XREP arms itself once the projectile separates from the shell casing and begins a 20-second cycle (the cycle is designed to allow officers to safely close the gap). The front impact point of the device has four probes similar to the standard Taser probe but is covered with a material that crushes upon impact. The projectile then separates with the main body falling away. The body, which contains the XREP “engine” has six electrodes that complete the circuit. The XREP will improve Taser’s effective range by over three times that of the standard 25-foot cartridge. Because the XREP impacts at one point before the separation, the accuracy potential is greater than from two probes at a spread of 30-plus inches. MSR: $99 per cartridge.

Shockwave T-RAD (Taser Area Denial System)—Imagine a Taser electronic claymore mine and you have an idea of what the Shockwave system is. With six 25-foot Taser cartridges mounted on the system capable of being command-detonated with a remote firing mechanism, the Shockwave delivers a 20-degree arc of Taser coverage. Usages: Tactical personnel are set up on a barricaded gunman. The Shockwave is set up covering the front door of the house. The suspect comes out but is not a deadly threat and won’t surrender. Answer: Fire the Shockwave from a distance behind cover which drops the suspect. This is only the tip of the tactical iceberg for what can be accomplished with this device which can be “daisy chained” together with other units, stacked together and set up either vertically or horizontally.

When I teach use-of-force to today’s cops I tell them that, with the proliferation of camcorders and cell-phones with video technology, they should anticipate that their actions will be caught on tape. Video from a citizen is only a two-dimensional representation of what actually happened, why not record from your angle or of the total incident?

Enter Taser Cam. Replacing the DPM (Digital Power Magazine) of the X-26 without changing the basic function, the Taser Cam turns on when the safety level is switched to the fire position and can provide over one hour of video record. This rechargeable device is capable of 50 cycles when fully charged. The MPEG-4 videos can be downloaded via a USB cable to a computer. It has its own infrared light source for use in low light.

This unit provides a record of an officer’s actions prior to as well as during the incident, which can be invaluable in dispelling accusations of excessive use of force and to defend officers in civil litigation. Kudos to Taser for providing officers with the ability to protect themselves from false excessive-force claims with state-of-the-art technology.

iRobot Alliance—iRobot and Taser have teamed up to develop new remote robot deployed and fired Taser devices. This collaboration will reduce officer or tactical personnel risk by moving a robot toward a suspect whether ensconced in a structure or out in the open and controlling them via a remotely fired Taser if necessary. Tactical teams in the military and in civilian police have been using robots to search structures and vehicles when occupied by armed suspects. The only problem was that there were no options if the suspect was found. By mounting remote fired Tasers on board, a team could safely drop a resistive individual giving the operators’ time to enter and put hands on the bad guy. How the iRobot Alliance develops will be interesting to see.

Taser Evolution
Taser inventor Jack Cover was a N.A.S.A. scientist who began working on the Taser in the late 1960s and was granted a patent for the original device in 1974. The name Taser is short for Thomas A. Swift’s Electric Rifle (based on the character in the Tom Swift boy-inventor adventure book series). The basic invention was that high-voltage electricity can control humans, but in low amperage is not injurious.

The original model looked more like an oversized flashlight than a firearm but was classified as one by the ATF because gunpowder was used to propel the barbs out to a maximum range of 15 feet. I have seen early 1980s video footage of Cover firing the device into his son’s back on the TV show That’s Incredible (the Taser was also featured in the 1976 Clint Eastwood movie, The Enforcer, when domestic terrorists kidnap the Mayor of San Francisco). Restricted to law enforcement sales by the ATF, the original Taser was used by law enforcement in this country in the 1970s and 1980s.

The original design lacked stopping power based on its seven-watt design, was inaccurate and required that the user continue to press the switch after firing to subdue the suspect.

Rick Smith and brother Tom Smith of Taser, began looking for an alternate means for controlling violent subjects after two friends were murdered in Arizona. Rick contacted Jack Cover who began working with the brothers on a Taser design that used compressed air (actually Nitrogen) instead of gunpowder to propel the probes.

With the new design, an electrical signal ignites a primer that drives the Nitrogen canister back onto a puncture pin. The gas is released which propels the probes forward.

Jack Cover signed over his designs to the Smith brothers in 1993 and a new company, originally called Air Taser, Inc. was born. It took several more of research before Taser announced development of the M-26 and began shipping in the year 2000.

M-26: A Pistol Shaped 26-Watt Taser
The M-26 significantly improved the controlling principles of the original Taser design. Although still at 50,000 volts, the M-26 delivers 26 watts of electricity. Although that seems a lot, they makes the point that it is the amperage not the voltage or wattage that is dangerous. A standard 110-volt house circuit delivers 16 amps; the M-26 delivers only 0.0036 amps.

The M-26 was vastly more effective than older designs because of something called EMD (Electro-Muscular Disruption). Simply put, the M-26 interferes with the electrical signals that the brain sends to the muscles. When the Taser probes make contact, the subject frequently tenses up and drops. Having experienced the awe and mystery of taking a Taser hit, I can describe it thusly: It felt like someone hit me in the side of the leg with a sledgehammer. I immediately said “#@st!” and went to the ground.

Other improvements: A pistol shaped design similar to a firearm which makes firing easier; laser sight; maximum range increased to 21 feet; automatic five-second cycling (press the trigger and the five-second cycle begins, each subsequent press results in another five-second cycle); and AFID (Anti-Felon Identification) tags that are shot out with the two probes and which can be tracked back to the customer.

When fired, the probes make contact and stick to the suspect’s clothes or skin. The probes fire out at an 8-degree arc at approximately 180 fps. This translates to a probe spread of about one foot for every 7 feet of travel. Therefore, the probes from the 21-foot cartridge are about 3 feet apart at max distance.

X-26: Compact, Lighter, More Effective
At 7 ounces and with a reduced overall profile, the X-26 is 60% smaller and 60% lighter than the 18-ounce M-26. In addition, due to the development of “Shaped Pulse” technology, the X-26 is 5% more effective, according to Taser International.

The X-26 introduces an integral LED light in addition to a laser sight. Most police use-of-force incidents take place in hours with low or subdued lighting. The integral light improves identification and application of the Taser as well as handling since holding a flashlight separately is not required.

Spare cartridges can be carried on the belt in single or double carriers; attached to the butt of the Taser or affixed to the outside of the holster. Taser offers 25- and 35-foot cartridges extending the control possibilities beyond the 15- or 21-foot mark.

New Police & LE Training Program
The Taser training program has improved tremendously since I became an instructor in 2000. The new two-day instructor program is about 50% classroom and the rest either practical application or scenario design.

Training cartridges are available that are capable of being fired but use non-conductive fishing line. These cartridges in conjunction with the Taser training suit allow full simulation training. This is the way of all police and military training, and once the basics such as handling and firing the unit are learned, dynamic training should be introduced including rapid reloading and failure drills.

Does Taser replace all other force options? Absolutely not nor do they claim that it does. It’s a very effective tool in the toolbox, but it will not replace pepper spray, baton, impact munitions or the firearm. Taser cautions against “Taser dependence or over-reliance.” They train police users of its products to always have another officer with a drawn firearm present should deadly force be necessary. www.taser.com