The idea of launching bullets fast from compact cases dates at least to the .250 Savage, designed by Charles Newton in 1913. The .300 Savage that followed in 1920 was a natural sequel. But powders of that day couldn’t generate the speeds possible now. And in an iron-sighted Model 99 Savage lever-action, the ballistic edge afforded by higher speeds was of limited value.

As the .30-06 and .270 gained a following and scoped bolt rifles extended their effective reach, few hunters fretted over case profile or action length. Indeed, the advantages of short rifle actions may be overstated. A couple of ounces less weight, half an inch less bolt throw—hardly the stuff to stampede shooters away from belted magnums. That cadre of high-octane rounds, first fashioned by Winchester in the 1950s, gave sportsmen affordable alternatives to the .375 and .300 Holland & Holland magnums, introduced in 1912 and 1925. Those great British rounds, designed for cordite powder, required very long actions, like the expensive Magnum Mauser and the heavy, homely 1917 Enfield. Not until 1937 would a commercial American sporting rifle—Winchester’s Model 70—handle the leggy Hollands.

The current short-magnum clique arrived during the 1990s. The .300 Winchester Short Magnum led a small platoon of WSMs, with case capacities essentially equal to those of short belted magnums, but in hulls only about 2.10 inches long. They didn’t require a magnum-length action or even a .30-06-length receiver. These short rimless magnums fit .308-length magazines! The .535 rims of WSMs suited bolt faces designed for the .532 rims of belted magnums. Body diameter matched the belt diameter of their forebears, so WSMs held more powder per unit length.

About the same time, Remington came up with abbreviated versions of its powerful Ultra Magnums. Short Action Ultra Mags were slightly shorter than the WSMs, to work in Remington’s Model Seven rifle. Partly because they were first, WSMs have outsold the competition. Indeed, both series perform well. I believe I shot the first elk taken with the .270 WSM. I may also have killed the first with Remington’s short .300. I used a .325 WSM to drop a mountain goat.

Meanwhile, Tucson entrepreneur John Lazzeroni came up with his own line of super-potent short magnums, from the 6.17 (.264) Phantom to the 10.57 (.416) Maverick. They evolved from a stable of full-length magnums. Most share the .580 bases of their forebears. The 8.59 (.338) Galaxy, introduced in 1997, ranks among my favorites. It downed a Montana whitetail at long range, and a bull elk up close in timber with equal dispatch. Though the case is just 2.05 inches long, it has more capacity than the .338 Winchester Magnum. John mated his cartridges to rifles of his own design. My L2000SA Mountain Rifle has a Jewell trigger and 24-inch Schneider barrel and weighs just 7 pounds. It is very accurate.

My friend Dick Davis, a lifetime competitive shooter, used a rifle in Lazzeroni’s 7.82 (.308) Patriot to set a world record for 1,000-yard bench-rest score in 2003. He put 11 of 15 Berger bullets into a 7-inch 10-ring! “I like this short .30 because my loads are so consistent,” says Dick. “A 10-FPS difference in exit speed causes 2 inches of vertical dispersion at 1,000 yards. Uniformity matters!”
Short cases also deliver more efficient powder burn and permit use of slightly faster propellants. The claim that they recoil less than belted magnums is technically true: A slightly smaller charge of faster powder means less ejecta. But felt recoil depends on several factors, some of which have greater effect.

“You can’t declare that short cases favor faster or slower powders than belted rounds,” cautions Chris Hodgdon, whose firm now markets more than 80 kinds of powder. “Ideal burn rate depends on case capacity, neck reduction and bullet weight. We’ve found very slow powders like Retumbo excel in the .270 WSM, but that in the .300 WSM H4350 works a bit better than H4831.” While these powders have long been favored in belted magnum, “short cases give you more bang per grain. In the WSM, you need only 64 grains H4350 to get 2,950 FPS from a 180-grain AccuBond. In the .300 Winchester, the recommended maximum charge of 67 grains yields 2,920 FPS.” He adds that some of the spherical powders Hodgdon sells are even better for short hulls. In my experience, Winchester 760 and H380 work well for light and mid-weight bullets in compact .30s, and in the .325 WSM.

Hornady arrived late to the short-mag party but with two superb rounds. The .300 and .338 Ruger Compact Magnums use new powders formulated to excel in short rifle barrels. Mitch Mittelstaedt, who headed the RCM project, tells me these propellants enabled his team to compress pressure curves so the .300 RCM behaves like ordinary .30 magnums in 24-inch barrels but doesn’t lose as much enthusiasm in carbines. “Velocity of .300 WSM bullets drops 160 to 180 FPS when barrels are chopped from 24 to 20 inches; RCMs lose 100,” he says. With chronograph legend Ken Oehler, I clocked .300 RCM loads from the 20-inch barrel of a Ruger carbine. The Oehler 35 gave me readings of around 2,840 FPS with 180-grain bullets. Groups stayed at an inch, probably in part because short barrels are stiff.

Inspired by the 2.58-inch .375 Ruger, the .300 and .338 RCM share their .532 head and base. Case capacities average 72 and 68 grains of water to the mouth (in comparison, Remington .30-06 hulls hold 67 grains of water, Winchester .300 WSM cases 79 grains). Ruger Compact Magnums are loaded to the same 2.84-inch overall length as WSMs and cycle through WSM magazines; however, you can slip four RCMs into most three-shot WSM boxes. 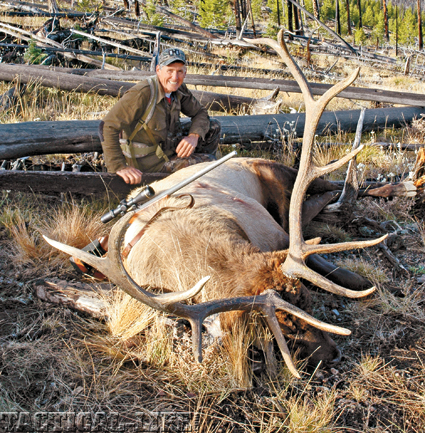 The author used a Leupold-scoped Ruger No. 1, custom-barreled to 7mm WSM, to down this bull at 330 yards with a 140-grain Nosler AccuBond.

I used a Ruger 77 in .300 RCM on a moose hunt soon after the round appeared. The light weight of the carbine proved a blessing after long days afield. The moose I found the last afternoon fell as though struck by the hammer of Thor.

Short magnum fans were favored last year with Hodgdon’s canister powders from the Hornady lab. Superformance and LeverEvolution powders now enable handloaders to match speeds of Hornady’s Superformance ammunition, which appeared in 2009. Dave Emary, working with St. Marks propellants, is largely responsible for the powder formulas and charges that yield higher velocities without exceeding standard pressures. Superformance powder is truly versatile, says Chris Hodgdon. “In a burn-rate chart, it lies between H4831 and H4350. But it trumps both in short barrels. It delivers top speeds in the .22-250, .243 and 6mm, as well as in short magnums.” It’s also a go-to option in the 6.5/284, which just took an elk for me, with a 140-grain Nosler Partition from a Zeiss-scoped E.R. Shaw rifle on a Savage action.
This fall I plan to hunt deer with a .300 Savage, one of the first short high-performance cartridges. Before the Depression, hunters no doubt thought it a sizzling number indeed! These days, the .300 WSM, .300 SAUM, .300 RCM and 7.82 Patriot leave it in the dust. But they didn’t start the trend, and it won’t likely end with them. The demand for more smash from smaller cases continues!