SHOT Show 2009 Round Up: Defense Ammo

by Mike Boyle
in Ammo, Gear
0

0
SHARES
0
VIEWS
Share on FacebookShare on Twitter
HORNADY
To achieve expansion, designers of modern handgun ammunition have traditionally gone with a jacketed hollowpoint bullet.  For the most part, this is all well and good, but not always the perfect solution.  In certain instances, the cavity of a hollowpoint bullet has been known to foul with clothing fibers, preventing expansion.  Since heavy clothing is one of most likely barriers in defensive shootings, this is a very legitimate concern.  There are also jurisdictions which prohibit the use of hollowpoint ammunition.  This is often the case in Europe but my home state of New Jersey also frowns on the use of JHPS by its citizens.  Lastly, there are those pistols which just won’t feed any sort of hollowpoint.

Hornady’s new Critical Defense ammunition effectively solves all three of the aforementioned problems. Their proprietary FTX (FlexTip) bullet features an elastomer filling in the nose of the bullet that prevents it from being fouled by clothing fibers.  Upon impact in tissue, the tip swells and imparts pressure against the circumference of the bullet cavity.  This causes the bullet to expand as it drives to the vitals.

Optimal propellants are used to minimize muzzle flash and protect night vision.  Cases are nickel-plated to prevent tarnish and make low light chamber checks easier.  At this point, the Critical Defense lineup includes .380 ACP, .38 Special, .38 Special XP, and 9mm Parabellum.  I wouldn’t be too surprised to see some additions in the future. 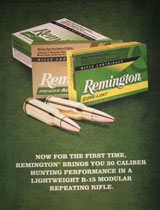 REMINGTON
From Remington, I didn’t see anything geared to the law enforcement or self-defense markets, but they did have one innovation that held promise.

Big Green has recently introduced the .30 Remington AR, a cartridge specifically designed for the classic Stoner platform.  To coincide with this development, Remington has also introduced a Model R-15 AR-style rifle chambered for the new round.

The .30 Remington AR is designed to deliver external ballistics similar to the .308 Winchester, but with a shortened case and reduced pressures more compatible with an AR-15 type rifle.  Data on external ballistics is sketchy as this is written, but performance is said to be closer to .308 than 7.62 x 39 mm.  Both full metal jacket and softpoint loads will be available.

With sister companies, Bushmaster and DPMS aligned with Remington, I wouldn’t be too surprised to see the .30 Remington AR in a black gun soon.
Shooters who don’t have faith in the .223, now have yet another alternative.

WINCHESTER
Winchester has long been a leader in the development of high performance handgun ammunition.  Past innovations have included the Silvertip, Black Talon, and Ranger SXT lines to name just a few.  New this year is Winchester’s Bonded PDX1 which stands as their best effort yet.

At a demo just prior to the SHOT SHOW, I was able to witness first hand, the capabilities of the PDX1 load.  The 180 grain .40 S&W was put through a few stages of the FBI test protocol where it delivered outstanding performance.  In bare gelatin, this load traveled approximately 11 inches and expanded to 2 times its original diameter.  Muzzle velocity was right around 1000 fps.  Subsequent testing against common barriers including heavy clothing, sheetrock and windshield glass, did not adversely affect performance in any way.  This was truly remarkable! 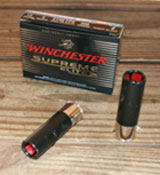 I’ve long been partial to rifled slugs in shotguns for law enforcement and Winchester has recently introduced a quartet of hard hitters.  The Supreme Elite Dual Band slug loads feature a sabot designed for deep penetration.  Slugs have long been good performers against light cover and the new Winchester loads should excel in that category.  Their heavy duty jacket pretty much guarantees 100% weight retention.  Supreme Elite Dual Band slugs are available in both 12 and 20 gauge in 2-3/4” or 3” length.