Sig Sauer BDX (Ballistic Data Xchange) is an innovative new rangefinder and riflescope system for hunters. It uses ballistics, environmental conditions and Bluetooth to illuminate the exact holdover dot on the reticle. 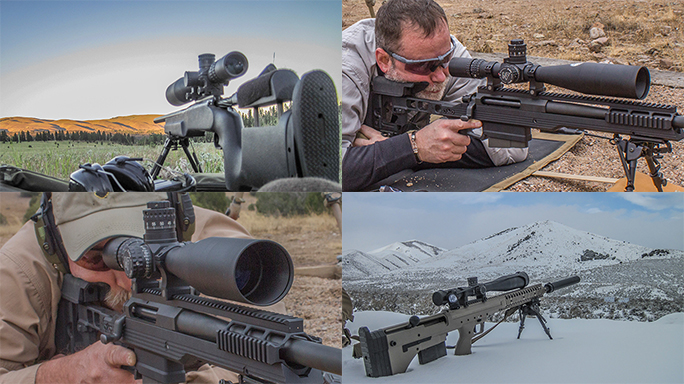 Should You Choose a Reticle Positioned in the First or Second Focal Plane?

Here’s how it works, according to the Sig press release: you download the “SIG BDX” app, which is available for Android and iOS. You then pair your rangefinder and riflescope and set up a ballistic profile. When you’re out in the field, range your target. The rangefinder will use integrated Applied Ballistics Ultralight technology to send your dope to the scope via Bluetooth. Using your ballistic profile, the ballistic solution is calculated for your target. It’ll instantly illuminate on the BDX-R1 Digital Ballistic Reticle with windage and elevation holds in the riflescope. A blue LED on the riflescope power selector lets you know the BDX system is paired. That same LED also indicates when the reticle has received the rangefinder’s ballistic holdover and windage data.

“Rangefinding riflescopes of the past have had two major shortcomings: they are either big, boxy and heavy, or extremely expensive,” said Andy York, president of the Sig Sauer Electro-Optics division. “The revolutionary and affordable BDX system packs advanced ballistics technology into a simple platform that looks just like the rangefinder and riflescope that every hunter is using today. It is extremely simple to use; range a target, put the digital ballistic holdover dot on target, pull the trigger, impact.  Incredibly accurate and extremely simple, just connect the dot.”

The rangefinders for the BDX include the following: KILO1400BDX, KILO1800BDX, KILO2200BDX, KILO2400BDX, and a KILO3000BDX rangefinder binocular. Each has features users will recognize from legacy KILO systems, including the Lightwave DSP digital rangefinder engine; Hyperscan with a scan rate of four times per second; RangeLock; and the Lumatic auto-adjusting display.

BDX also includes KinETHIC, a kinetic energy transfer indicator that lets you know if a hunt is ethical by telling you when the energy on target dips below a threshold set by the hunter using the BDX app.

“Ethics in hunting are a contract we make with ourselves based on the standards we as sportsmen adhere to as a group, what we feel good about personally, and respect for the game and our hunting traditions,” York added. “KinETHIC is a feature that asks the hunter to make an educated and ethical decision beforehand by taking into consideration what the velocity and energy capabilities of your bullet and load are to deliver a killing shot. It then lets you know if the shot you are about to take will fulfill this contract. If not, it provides a visual affirmation to stalk-in closer. Knowing your maximum effective hunting range is more than just knowing what you can hit.”

MSRP on the KILO BDX Rangefinders starts at $299.99. Meanwhile, the SIERRA3BDX Riflescopes start at $599.99. Look for Sig Sauer BDX to be available at dealers starting in July.

For more, go to SigSauer.com.