by Paul Markel
in Accessories, Gear
0

0
SHARES
3
VIEWS
Share on FacebookShare on Twitter
“Fight!” was the command given by the instructor from behind the line. An audible click was heard as the firing pin of my M4 carbine fell on an empty chamber. The target was a mere 5 yards away. Not even time for a quick reload. I let go of the carbine, allowing the single point sling to catch it. My right hand found the handgun secured in a drop holster to my right leg. Out came the pistol and I fired two rounds of .45ACP ammunition into the preferred zone. 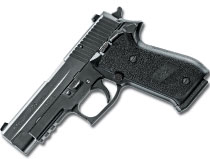 I was standing on the firing line under the hot July sun just outside of Camden, Tennessee. The primary purpose of my trip was to participate in the Fighting Rifle course by Tactical Response. In addition to a .223 carbine, I needed a quality handgun for transition training. Having just received the new SIG SAUER P220R SAO pistol a week prior, I felt that this would be an excellent time to try the gun out.