Sig Sauer has been building rifles geared towards the working professional for decades. The introduction of the SIG516 and SIG716 rifles brought the AR platform to the company’s excellent line of duty- and combat-ready rifles. Both have proven to be among the best available today, with many innovations added at the request of operators in the field. When the M400 was introduced, it brought Sig Sauer quality and attention to detail to a more affordable, AR-based rifle. With several variations, it has become a favorite of many officers.

“Both the 5.56mm and 7.62mm SIG-SD suppressors measure 6.8 inches long, so they’re well suited to both longer and shorter rifles…”

Rifle suppressors have become more popular among law enforcement and military personnel over the last few years. They offer several advantages, including sound reduction, recoil control and a significant reduction in muzzle flash. All of these factors contribute to safer operation under adverse conditions and the ability to stay focused on the fight under sustained fire. While some companies have partnered with existing suppressor builders, others have designed their own. Sig Sauer has done just that, and a recent trip to the Sig Sauer Academy allowed me the opportunity to spend some time with both of the company’s new SIG-SD rifle suppressors, or as the company calls them, “silencers.”

Sig Sauer’s suppressors are constructed of stainless steel with a high nickel content. Stainless steel has long been the first choice for rifle suppressor construction. While titanium has been all the rage these days, it is difficult to work with, expensive and requires very special welding. Titanium is well suited to specialty applications, but stainless steel remains well suited for hard general use, especially where sustained full-auto fire is required. The high-nickel-content stainless steel Sig uses for both the baffles and main tubes helps reduce metal degradation and increase its longevity.

Rifle suppressors have gone a couple directions in the last few years. Most are shorter and more efficient. Short suppressors are lighter, stiffer and place less unwanted weight over the end of the barrel, reducing stress on the barrel threads. Shorter suppressors are louder, however, and can be less efficient when it comes to reducing flash. Reducing the volume of gases the suppressor redirects can make them less efficient. One solution is to make them larger in diameter. Increasing their volume accomplishes several things, including reducing heat and backpressure. When full-auto fire is in order, a larger-volume suppressor also tends to make the weapons more reliable. This allows you to maintain solid reliability and effectiveness without adding undue weight and length. Both the 5.56mm and 7.62mm SIG-SD suppressors utilize this concept with full 2-inch-outside-diameter tubes. Tapering at the rear, they will fit under many short-barreled rifle (SBR) handuards. The suppressors also have a simple thread-on design, meaning they won’t come loose under fire and will return to zero when removed and reattached after cleaning. In order to ensure proper attachment on the muzzle, “wrench flats” are machined into the base. If the base sits under a handguard, you can order the suppressor with an optional rebar cutter front cap. While useful for cutting rebar, it also facilitates proper tightening when the wrench flats are not accessible.

Both the 5.56mm and 7.62mm SIG-SD suppressors measure 6.8 inches long, so they’re well suited to both longer and shorter rifles. On SBRs with the proper handguard, the taper nestles nicely under the first inch or so of the forend. And because of the 2-inch outside diameter, standard AR rail-mounted sights can still be used. Lastly, the SIG-SD suppressors have 1/2-28 TPI (5.56mm) and 5/8-24 TPI (7.62mm) threading, the standard for mounting suppressors on most AR-based rifles and precision bolt actions.

A recent trip to the Sig Sauer Academy provided the opportunity to give these suppressors a try. Over the course of two days, I was able to test both 5.56mm and 7.62mm suppressors. One of Sig Sauer’s M400 rifles provided the test platform for the 5.56mm SIG-SD. Testing the 7.62mm suppressor was a real treat, as it was the latest generation yet to really be seen in public. Mounted on a SIG716 Precision rifle, both the suppressor and rifle had not been widely seen outside military and law enforcement demonstrations.

“Rapidly fired five- and 10-shot groups yielded consistent accuracy, with no significant shift in impact due to heat or other factors…”

Of the two tests, my evaluation of the 7.62mm SIG-SD was the most extensive, and the SIG716 Precision did not disappoint. All of the testing was done with the SIG-SD suppressor mounted, so it provided a solid indication of its effectiveness. Given two days of engaging targets out to 800 yards, the SIG716 Precision was as or more accurate than any AR-based, piston-driven 7.62mm rifle I’ve ever tested. Groups with Federal Gold Medal match ammunition hovered around 0.5 inches. More importantly, the rifle was incredibly consistent. Poorly designed suppressors can cause impact shifts, especially on cold-bore shots. Cold-bore shots during the testing landed within less than half an inch of each other, meaning no such shift occurred with this combination. Rapidly fired five- and 10-shot groups yielded consistent accuracy, with no significant shift in impact due to heat or other factors. Suppressors should enhance a rifle’s accuracy as well as the shooter’s ability to shoot accurately—the 7.62mm SIG-SD does both well.

I spoke with Jarrod McDevitt, the product manager for Sig Sauer’s rifles, who told me that the SIG-SDs are designed with sound suppression as their primary function. The idea is to create a suppressor that remains quiet without affecting reliability and accuracy. Using a 2-inch outside diameter increases volume, allowing for less backpressure. Coupled with a piston system and the ability to adjust gas pressure, you can really dial things in. Considering the accuracy and reliability of this SIG716/SIG-SD combo, they have it dialed in nicely. In terms of sound suppression, the 7.62mm SIG-SD was as quiet as most, and quieter than any of the shorter designs in use today. While all of my testing was done outside, it was completed under an awning as well. In fact, shooting without ear protection wasn’t an issue. 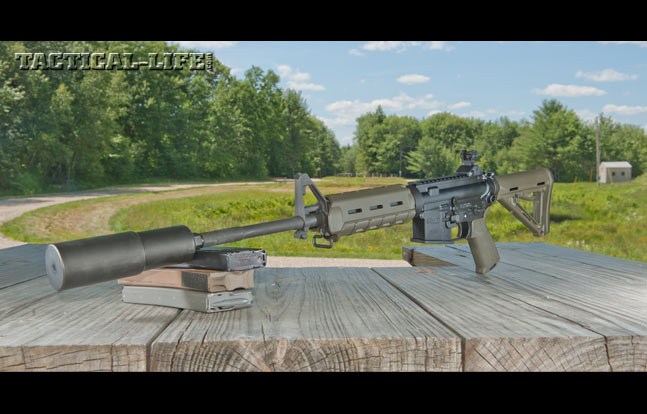 Sig Sauer’s M400 Enhanced has proven to be an excellent direct-impingement (DI), AR-style rifle. Available in black, OD green and Flat Dark Earth, it has become a favorite among officers looking for a solid and affordable rifle. While gas-piston rifles are becoming popular, especially when suppressed, the standard DI system remains the most prevalent by far—most officers are on a budget, and DI guns are often less expensive. The M400 provided an excellent platform for testing the 5.56mm SIG-SD.

“Testing for accuracy at 100 yards with practice ammunition, the M400/SIG-SD combo grouped at about 3 inches or so using iron sights…”

Spending most of a day with this rifle, it proved to be 100 percent reliable with the suppressor attached. One of the greatest drawbacks of suppressor use on DI guns is excess gas in your face. The greater the backpressure, the more this occurs. The 5.56mm SIG-SD was better than most in this area. After several rounds, including some multiple-round strings, it was there, but it wasn’t very noticeable. Using a larger outside diameter (allowing for more volume) really helps, especially with 5.56mm rifles. This typically reduces backpressure, meaning less gas ends up back in the action or in your face. It also contributes to greater reliability, as there’s less effect on bolt speed and less fouling. This particular M400 was a 16-inch-barreled version, so reliability wasn’t really in question. We did not get to a test short-barreled version, but my guess is that it will still work well with the SIG-SD mounted.

The 5.56mm SIG-SD’s sound suppression was excellent—about as good as it gets unless you’re using a precision rifle suppressor (one designed for bolt action rifles). Precision rifle suppressors work well on carbines, and they are plenty quiet, but they really gum up the works. While all the shooting was completed outside, the SIG-SD was quiet enough for shooting without ear protection (not that you should do so). In a real engagement, it would keep you and anyone next to you in the fight and suppress most of the flash.

Testing for accuracy at 100 yards with practice ammunition, the M400/SIG-SD combo grouped at about 3 inches or so using iron sights. Limited to the ammunition on hand, precision accuracy was a bit fleeting, but it was plenty accurate. Using match ammunition and an optic would’ve definitely produced better accuracy.

Because of the bulk ammunition and iron sights, removing the suppressor and checking for shifts in impact at 100 yards was a bit problematic. Moving to 25 yards, there was very little visible shift. Shooting a 10-shot group, the cluster moved about an inch, much of it likely attributable to a kneeling position and iron sights. Once these SIG-SDs hit the market, a test on home turf with multiple weapons, optics and match ammo would provide for more information, but the 5.56mm SIG-SD seems to shift little, or it’s commensurate with most commercially available suppressors.

Neither of these suppressors adversely affected balance significantly. Mounted to the SIG716 Precision, it was very well balanced. Given this is a 7.62mm rifle with a longer barrel, it is going to balance better, but honestly, after a day of shooting there was no noticeable weight shift.

“Whether you are looking to suppress your duty weapon or just have a more enjoyable trip to the range, Sig Sauer’s line of SIG-SD suppressors looks to be a solid choice with a bright future…”

Adding a suppressor to any 16-inch-barreled 5.56mm, especially one of standard size, makes for a long rifle. Adding 7 inches to the front of a light carbine is going to be noticeable, and the SIG-SD was no exception. Mounted to an 11-inch-barreled rifle, with a portion of the suppressor under the handguard, it would be much better. That being said, it was no different than any suppressor, better than some. Overall, the weight of the 5.56mm SIG-SD 5.56mm is pretty light, especially compared to those using a quick-detach (QD) attachment.

As Sig Sauer’s first entry into the rifle suppressor arena, these two look very promising. Mated to the SIG716 Precision, the 7.62mm SIG-SD was excellent. Accuracy was solid, and the SIG716’s gas-piston design made it well suited for suppressor use. The 5.56mm SIG-SD also worked well, and both were plenty quiet. Whether you are looking to suppress your duty weapon or just have a more enjoyable trip to the range, Sig Sauer’s line of SIG-SD suppressors looks to be a solid choice with a bright future.