With the innovative LevelPlex system, Sig’s WHISKEY5 scopes will tell you if the rifle is canted or level for more accurate shooting.

I cinched a Sig 2-10x42mm WHISKEY5 scope to a Bergara B-14 Woodsman rifle in .270 Winchester. The scope’s battleship-gray tube and black adjustments are distinctive, classy. Its lighted reticle has nine daytime and two night-vision (infrared) settings interspersed by “off” stops. So the previous brightness setting is always just a click away. Like its 1-5x20mm and 3-15x44mm counterparts, this 21-ounce scope has a 1-inch tube. Other sights in Sig’s WHISKEY5 stable—2.4-12x56mm, 3-12x52mm and 5-25x52mm versions—have 30mm tubes. The unifying theme is 5X magnification. Quarter-MOA windage/elevation dials on all but the 1-5x20mm yield adjustment ranges to 120 minutes. The dials are resettable. Just lift and spin to zero. The 3-15x52mm and 5-25x52mm WHISKEY5 scopes have side focus/parallax dials.

So, what else is new? Myriad riflescopes now have illuminated reticles, wide power ranges and turrets with multiple dials that work various kinds of magic. Well, the LevelPlex is new.

You probably know that canting, or tipping, a rifle can cause the bullet to miss its mark. The sight must be at 12 o’clock—directly above the bore—for the bullet’s arc to cross the sightline more than once. Your zero is at the second crossing. Gravity pulls the bullet from 12 to 6 o’clock. If your sightline tracks at even a slight horizontal angle to the bore, it diverges from the bullet’s path after a single crossing. The falling bullet won’t again meet the sightline because it is off to the side.

When I was shooting competitively, bubble levels were becoming common on scopes and iron sights. Alas, to see the bubble, your eye had to be out of the sight, and match time kept away ticking while you checked to see if your rifle was level. As the effect of canting increases with distance, bubble levels have since appeared on rifles (and scopes and mounts) used in long-range competition. They’re even popping up on hunting rifles. Still, whether atop a ring or protruding to the side, they force your eye off target, out of the glass. They’re also hard to see when you must aim into the sun, and when snow covers or curtains them. And they’re easily damaged.

Solution: Put a level inside the scope. That’s what Sig Sauer has done. At 3 and 9 o’clock in the scope field, the reticle’s horizontal wire ends in a compact black “bump,” in which there’s an invisible arrow pointing up. When you aim, the arrow on the side below horizontal lights up. This orange delta is obvious in your peripheral but doesn’t interfere with your aim. Tip the rifle slightly and the delta vanishes. Overcorrect and an indicator will light up on the other side. This digital level is sensitive to a cant of 1 degree or less. 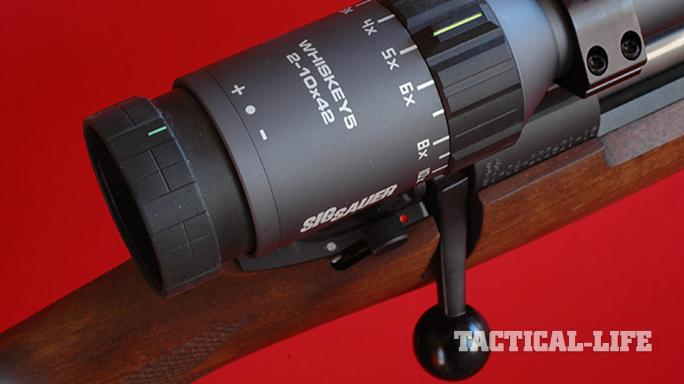 Designed in Oregon and assembled in Japan, the WHISKEY5 is just one of four riflescope lines under the Sig Electro-Optics umbrella. Five WHISKEY3 scopes boast 3X magnification, with 2-7x32mm, 3-9x40mm, 3-9x50mm, 4-12x40mm and 4-12x50mm models. They all have 1-inch tubes; none feature a focus/parallax dial. Dubbed “hunting” scopes, both WHISKEY families have reticles in the second (rear) focal plane.

Sig Sauer catalogs four reticles in the TANGO line and four others in its WHISKEY scopes. My early 2-10x42mm WHISKEY5 has a QuadPlex reticle—Sig’s name for its standard plex. The 3-15x44mm WHISKEY5 with LevelPlex that I borrowed for this review has a Triplex reticle (think German #4). Both incorporate Sig’s HellFire illuminated dot. Its motion-sensitive switch kills illumination after two minutes of inactivity, then restores it when the rifle is moved. One CR 2032 battery powers the dot and LevelPlex indicator.

Using Sig-brand rings, I attached the sample 3-15x44mm WHISKEY5 LevelPlex to the rail on my Legendary Arms Works (LAW) bolt rifle. It complemented the matte gray and speckled sea-green stock. The magnification range of this hunting scope was perfect for the .280 Ackley chambering. But editors will have their way, so before shipping the Sig scope back to Oregon, I mounted it on a Wilson AR-style rifle in .308 Winchester, and it performed just as well on this short-barreled semi-auto.

Ferocious winter weather and deep snow limited my range time with this scope. Fortunately, I’d already tested another Sig WHISKEY5. The crisp, repeatable clicks impressed me on both models. Taking 20 at a time to check their quarter-MOA values and repeatability, I punched groups evenly “around the square” and tallied an average of just over 5 inches per shift. Purchasing a WHISKEY or TANGE scope entitles you to one custom-etched Sig Ballistic Turret (SBT) dial. You just let Sig know your factory load or supply the starting velocity and ballistic coefficient of the bullet in your favorite handload. Easily installed, the SBT enables you to “dial the distance” and hold center at any range.

Long lists of cute innovations can obscure the basic components that make a riflescope useful. In describing the optical innards of the WHISKEY and TANGO lines, Sig didn’t spare hyperbole or shy from a flurry of proprietary letters and numbers. Rather than recite and translate hieroglyphics (the IPX-7 rating means you can jump in a lake and hold your rifle a meter below the surface without fearing scope leaks), I’ll point out that the glass and coatings are chosen for high light transmission and sharp resolution. The lenses are fully multi-coated to limit reflection and refraction across many wavelengths. The exterior lenses also wear a hard, abrasion-resistant film.

You’ll find Sig-quality optics, attractive cosmetics and precise, repeatable adjustments in other riflescopes in the WHISKEY5’s price range. But they won’t have an illuminated LevelPlex reticle.

Sig Sauer is proud of its scopes. The retail prices in the WHISKEY5 series run from $1,080 to $2,160. But the company is also proud of its Infinite Guarantee. This means the scope is good for your lifetime, and it’s transferable. There’s no card, no charge, no time limit. When you buy a Sig riflescope, it will always perform for you, or Sig will fix it or replace it at no charge, no matter “how it happened, whose fault it was, or where you bought it.” There’s only one exception: Electronic and tritium components are guaranteed for five years.