by Paul Markel
in Accessories, Gear
0

0
SHARES
0
VIEWS
Share on FacebookShare on Twitter
The LMT7 rifles were equipped with SureFire suppressors and adapters and functioned without incident during the intense three-day urban sniper training course.

If you’d have told me six months ago that I would be shooting a suppressed black rifle 30 minutes outside of Los Angeles, I’d have sent you for drug testing. Nonetheless, there I was lying under the bright sun and brilliant blue sky on the Angeles County Rifle Range deep in the People’s Republic of California.

SureFire has been the name in tactical illumination for some time, having just celebrated their 30th birthday. However, a fact that many TW readers might not be aware of is that SureFire is one of the leading producers of firearm sound suppressors, with many current military and law enforcement contracts including the United States Marine Corps. 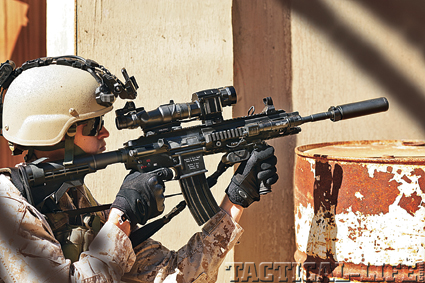 The addition of a suppressor gives the military shooter many advantages over his opponent. This is particularly true in and around buildings where gunfire noise is amplified.

The primary mission of the suppressor is the reduction of audible gunfire noise. That being said, the sound of the projectile moving at super-sonic speed is unavoidable, and there will be a small portion of propellant gas noise. There will always be some noise when shooting a suppressed rifle. The term “silencer” is a misnomer.