Less chaos when shooting is always a good thing, which is where SureFire’s new Warden Blast Diffuser comes in handy.

The Warden Blast Diffuser directs the concussive blast of the muzzle forward of the weapon system and the shooter instead of venting to the side as seen with stand-alone muzzle brake devices. This aids in reducing the overpressure and flash felt by others to the immediate left and right of the shooter’s firing position.

The Warden securely attaches to any SureFire SOCOM 5.56 or 7.62 muzzle device through the same patented SureFire Fast-Attach system found on the SureFire SOCOM suppressor series.

Additionally, SureFire’s blast diffuser aids in minimizing dust signature when firing from a prone position that would traditionally be seen when firing with a standard flash hider or muzzle brake.

The Warden retails for $180 and is available now in Black or Dark Earth.

For more information on the Warden Blast Diffuser and other products from SureFire, please visit SureFire.com. 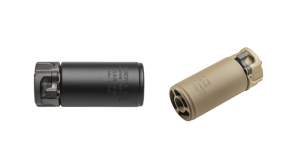