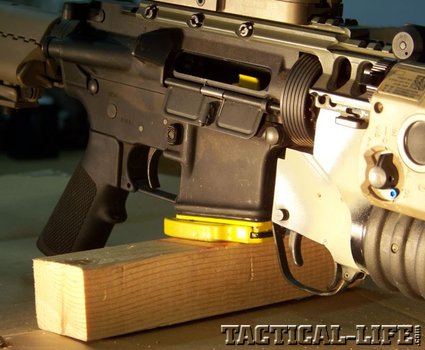 Let’s face it. With very few exceptions, AR-type weapons (M4/M16/AR-15 or similar clones) spend more time sitting around unused than at the range or in the field. Whether stored in a gun safe, locked in a closet or buried in the trunk of a patrol car, almost every AR lives a life of waiting. And as it patiently anticipates its next meal of 55- or 62-grain 5.56mm NATO, its huge, open magazine well becomes a magnet for dirt, debris and moisture.

This is, generally, a minor annoyance cured by routine cleaning, but years ago when MagBlock founder and CEO, Michael McCarthy, was deployed in Afghanistan, he realized that in that brutal, combat environment, even an afternoon’s accumulation of airborne debris could make a weapon inoperative. There, as in many areas, an operator’s weapon must be ready at all times. But the blowing and ever present dust and grit (together with some local administrative requirements that magazines not be inserted in stored weapons) forced operators to repetitively clean stored or transported weapons—or risk weapon failure in combat.

Consequently, McCarthy developed the MagBlock, which seals the magazine well with a very visible and safe, magazine-shaped, polymer plug. Each MagBlock follower can be positioned either in the ready position or to mechanically block the bolt carrier so it is visibly out of battery (showing safe). That means when you get to the range and take it out of the case, the rangemaster and everyone else around you will immediately know the condition of your weapon. 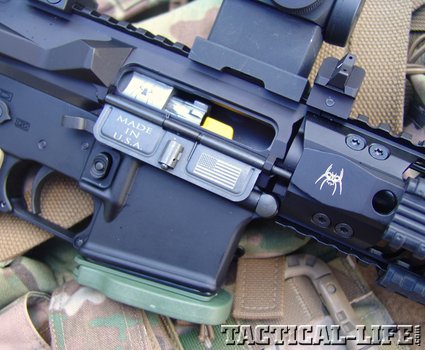 For full usage of space, the MagBlock’s interior compartment can be used to store small bits, or three or four CR123A batteries. The MagBlock comes in various colors, including bright yellow or the usual tactical pastels, and can be used with an M203 grenade launcher mounted. However, for a civilian or LEO AR-user, the MagBlock not only keeps the weapon sealed and clean but also gives protection from unintended use, by preventing the direct introduction of live ammo into the receiver. For more information, visit magblock.com or call 334-370-0141. 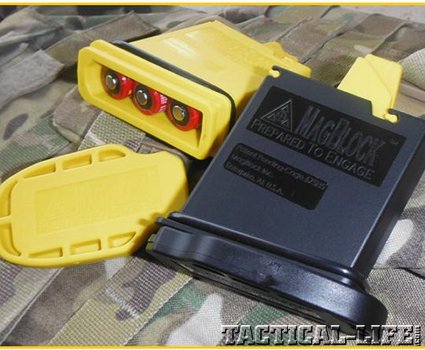 GripShot: The Mounting System Built for Attaching a Sidearm or TASER to a Primary Weapon 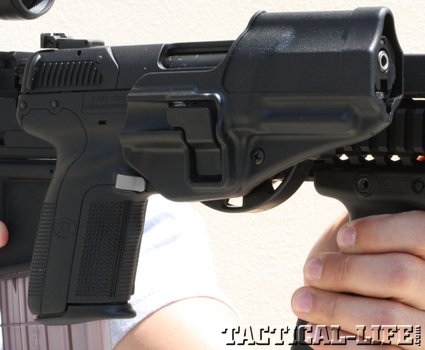 I once worked with a U.S. Marine captain who was a combat-seasoned infantry company commander. I had innocently asked him if a certain doo-dad should be placed on his rifle, and his answer was immediate and emphatic: “My rifle is for killing, nothing else!”
Based on that and on work with many other warriors, the conclusion was that, even though lights, lasers, bipods, cameras, sensors and navigation gear can now be taped, strapped or mounted on a Picatinny rail, only gear that enhances your effectiveness in combat should be on your primary weapon.

Enter the GripShot, a mount for holsters like the Blackhawk Serpa (which can be worn on the leg, waist or vest), which can be attached to the rail of your primary weapon either for extremely rapid transition to your sidearm when microseconds count or for very quick access to a less-lethal option such as a Taser. 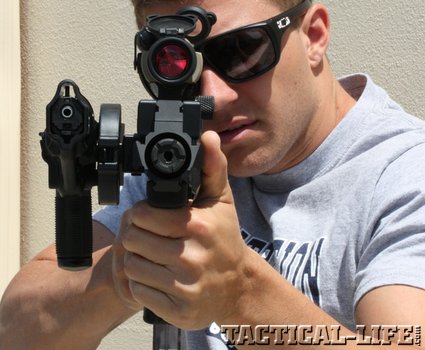 In a situation such as MOUT (military operations in urban terrain), where house-clearings raise your chance of a very close-quarters surprise engagement, having a second weapon right there in case your primary weapon is disabled, grabbed or emptied would be a lifesaver. That accessible secondary weapon would also, during CQB room-clearings, enable operators in a stack to use Tasers without removing their primary weapons from their shoulders and bogging down the entry momentum. The nice thing about the GripShot is that, when the entry is over, the holster can be returned to the vest or belt. The pistol or Taser must be withdrawn from the GripShot holster prior to use, which takes only a fraction of a second since the GripShot is designed to keep the backup weapon in the operator’s field of view. As a result, the operator is not distracted from his or her situational awareness while accessing a backup weapon located elsewhere on the kit. For more information, visit gripshot.net or call 954-444-1990. 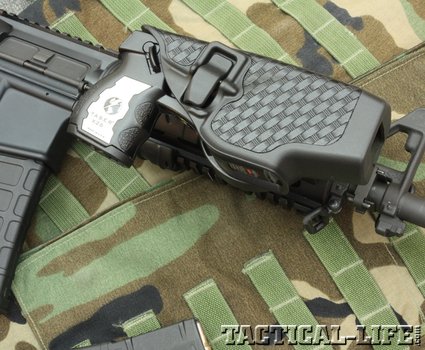 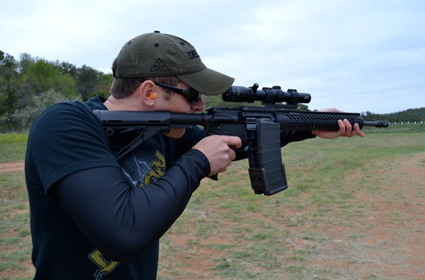