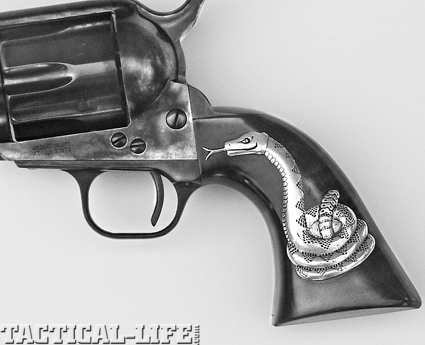 The coiled rattlesnake is cast in detail from sterling silver. Note the excellent fit of the one-piece walnut grips.

A fan of the TV western Rawhide, which starred Eric Fleming as Trial Boss Gil Faver and a very young Clint Eastwood as Segundo (second in command) Rowdy Yates, I was aware of the episode where Rowdy acquired the Colt six-gun with the silver rattlesnakes on the grips. In the second episode, “Incident At Alabaster Plain,” which aired on Jan. 16, 1959, guest star Mark Richman played Mastic, a vicious killer who challenged Rowdy to a gunfight. Faver intervened but in the end Rowdy went after Mastic, who fled to the bell tower of a mission after robbing and murdering his stepfather. Faver yanked on the bell rope and the bell knocked Mystic out of the tower and he fell to his death. Faver retrieved Mastic’s Colt, which had the silver rattlesnakes on the grips, and gave it to Rowdy. Clint Eastwood used the snake-handled Colt, a 5.5-inch barrel .45 for use with Hollywood 5-in-1 blanks, for the rest of the Rawhide series.

When Eastwood was hired to star in his first “Spaghetti Western,” A Fistful of Dollars, he used the snake-handled Colt with his personal Andy Anderson custom Walk-and-Draw rig. He continued to use the snake-handled Colt in For A Few Dollars More. The sterling silver rattlesnakes, coiled and ready to strike, were supplied on the custom grips by Andy Anderson of the North Hollywood Gunfighter shop. It is unknown who crafted the original snakes, but they were definitely professionally made by a silversmith.

Cimarron Fire Arms Company has added a “Man With No Name SA” to their line of Italian replica SA revolvers for 2009. It is available as a copy of Eastwood’s revolver, with a 4.75- or 5.5-inch barrel in .45 Colt caliber only.

My sample “Man With No Name SA” is stamped “A.UBERTI — ITALY” on the bottom of the barrel, with “CIMARRON F. A. CO. FRDRBRG, TEXAS” “MANUFACTURED BY A. UBERTI — ITALY” in two lines on the top of the barrel. The frame, loading gate and hammer are color casehardened with the remainder of the revolver finished in an attractive blue. The cylinder has the front edge radiused, as on first generation Colt SA’s, and the cylinder pin is secured by a spring-loaded crosspin. For import purposes, the “Man With No Name SA” has the two-position cylinder pin. When fully seated the end of the pin blocks the hammer from the firing position, acting as a hammer drop safety. As standard practice I shorten all two-position cylinder pins in my personal SA six-guns. A nice feature is the last four digits of the serial number are stamped on the cylinder as with early Colt SA revolvers. The out-of-the-box trigger pull measured 3 pounds and broke cleanly. While the “Man With No Name SA” could benefit from an action job, I used it in a round of Cowboy Fast Draw competition and had no trouble thumb cocking it on the draw with reaction, hitting times in the mid .400 ( .445) of a second.

But what makes Cimarron’s “Man With No Name SA” different is the grip. My sample has an attractive burl walnut one-piece grip. The fit to the backstrap and trigger- guard is perfect and the grips are shaped as the early Colt one-piece wood grips, fitting flush with the frame at the top. But what makes these different, i.e. Eastwood’s Rawhide and Spaghetti Western Colt, are the rattlesnakes on each side of the grip. The snake is cast in 3-D from sterling silver. Individual scales are apparent down the snake’s belly with diamonds along its back. The rattles extend upward from the center of the snake’s coiled body, and the head has the detailed eye, nostril, mouth and “forked” tongue. The silver snakes are overlays and are twins for those on the Eastwood Colt. 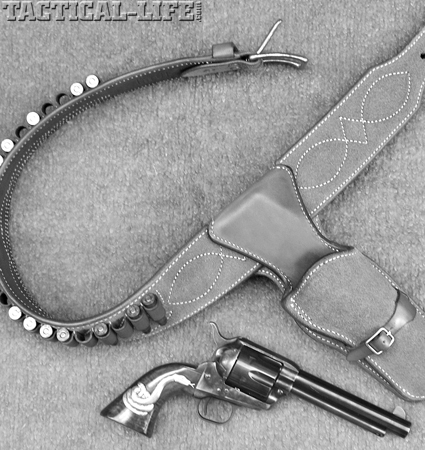 The Alfonso copy of the Eastwood Rig is correctly sized for the 5.5-inch barrel SA.

Not having the patience to wait for nice weather for a trip to the local shooting range, I test fired the sample “Man With No Name SA” in my basement Fast Draw range using shotgun primer powered wax bullets. In the dim indoor light I have trouble seeing iron sights, so I ended up shooting offhand groups at 10 feet, with five shots going into one ragged hole which measured 0.88 of an inch, center-to-center on the largest measurement.

I originally intended to return the test “Man With No Name SA” after finishing this article, but I think it has found a home here and will not be going back to Cimarron Fire Arms Company. They certainly have a winner.

Clint Eastwood used several holster rigs during the eight years on Rawhide. But he ended up using a modified Andy Anderson Walk-and-Draw Western-style rig which has become known as the Eastwood Rig. I have a copy of the undated Anderson shop invoice for the original Eastwood Rig, which reads “CBS – Rawhide, Clint Eastwood, Walk & Draw Western, single right Rough – out .45 – 5 ½ Full loops 41 Center Hole.” It falls between invoices for Sheb Wooley who played the scout Pete dated 12-10-1959 and one for James Murdock (Mushy) dated 5-13-1960.

The Anderson Walk-and-Draw rig was designed to be used without a tie down strap, and had what Anderson called a “built-in tie down”. This was a steel lined hip plate, curved for the shape of one’s hip, on the backside of the holster. When the gun-belt pulled this “built-in tie down” securely into the hollow of the wearer’s hip, the holster did not swing back and forth with the leg as one walked. The original Walk-and-Draw holster (W & D Standard) did not have a full skirt behind the pouch, and many Fast Draw shooters found it difficult to attach a deflector plate. So Anderson added a full skirt to attach the deflector plate to, and it became the W & D Western rig. 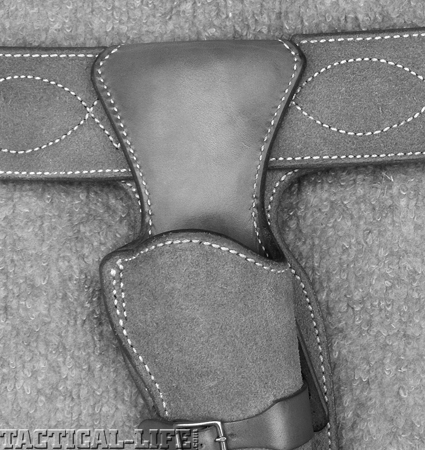 Note the two-tone finish and the fancy “Gunfighter stitching” on the Alfonso Eastwood Rig.

Anderson’s other major contribution to holster design was the muzzle-raked holster, which angled the gun muzzle forward as much as 25 degrees. This allowed one to thumb cock their SA six-shooter before it cleared the holster without the gun muzzle ever pointing at their leg or foot, an important feature in live ammunition Fast Draw. But Eastwood wanted his holster vertical, thereby being a custom W & D Western rig.

So what better rig for the Cimarron “Man With No Name SA” than a correct Eastwood Rig? While Andy Anderson retired many years ago due to poor health and has since passed away, there are two sources for correct copies of the Eastwood Rig today. These are Spaghetti Western Replicas and Alfonso Of Hollywood Leather Company. I placed a call to Alfonso’s son Omar and about two weeks later I had an Alfonso Italian Western Holster Collection A8 Eastwood Rig. 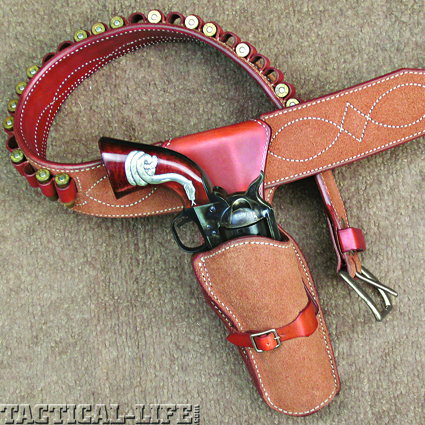 Alfonso and Anderson both worked in the Arvo Ojala Hollywood Fast Draw Holster shop at the same time. After each opening their own holster shops in North Hollywood as competitors, they remained life-long friends. Alfonso’s current advertising for the Eastwood Rig states: “This superb Walk-and-Draw holster was designed and made originally by our friend Andy Anderson.”

My sample Eastwood Rig is constructed of the highest-grade cowhide in a two-tone rough out finish. The two-tone finish comes from the lining, strap around the holster pouch and full bullet loops being smooth side out, while the rest of the rig is rough out. When the rig is finished with neatsfoot oil, the smooth leather darkens more than the rough out for the attractive two-tone finish. The W & D Western holster has a 4-inch drop shank that goes over the top of the gun-belt that fits in a matching notch. The holster pouch, shank and hip plate are lined with an 18-gauge steel insert. The gun-belt is of the tapered style, being 2½ inches wide and tapering at each end for a 1½-inch hammered solid brass buckle. The hand hammered brass buckle was an Anderson exclusive. Alfonso has had an original hand hammered buckle duplicated in a cast solid brass buckle. The buckle is secured with three screw post binders so that it may be removed. My 40-inch center hole gun-belt has 25 bullet loops for .45 Colt cartridges.

Here we see the Alfonso Eastwood Rig in authentic two-tone rough-out finish. The wrist cuff is a copy of the one used by Eastwood in For a Few Dollars More, available from Spaghetti Western Replicas.

When Anderson introduced the W & D Standard rig, it came with six bullet loops and the rest of the gun-belt had fancy stitching. While many people call this “boot stitching,” Anderson called it the “Gunfighter stitch,” after the name of his holster shop. The Alfonso Eastwood Rig has authentic Gunfighter stitch the full length of the gun-belt. The holster strap is one-inch wide and tapers to a ½ of an inch brass buckle. The holster has a removable hammer strap which attaches to the pouch with a snap. The Alfonso Eastwood Rig is finished in a beautiful oiled golden brown. This is the perfect rig to carry the Cimarron “Man With No Name SA.” 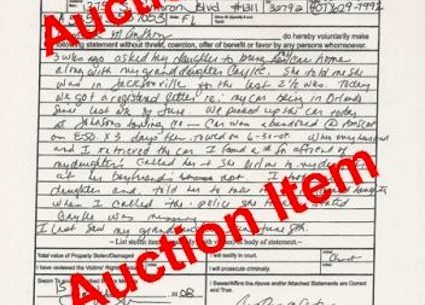 Buying up crime souvenirs, “murderabilia” is a growing U.S. market.

The coiled rattlesnake is cast in detail from sterling silver. Note the excellent fit…