THE SCIENCE OF SILENCERS

by Cameron Hopkins
in Accessories, Gear
0

Ignorance and stupidity are not the same. Ignorance is a lack of information whereas stupidity is the inability to comprehend the information available. In my case, however, both apply. Worse yet, I think I’m fairly smart which means I don’t know what I don’t know. I’m about to discover just how dumb I am on the subject of suppressors because I’m here at Long Mountain Outfitters in Nevada to take a suppressor class from the acknowledged dean of silence, Dr. Phil Dater. 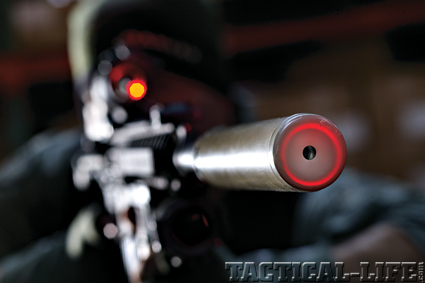 Suppressors are not without their drawbacks. Adding a pound or two to the muzzle slows target-to-target acquisition and makes the weapon longer, and thus more cumbersome in CQB.

Dr. Dater is a retired medical doctor, a radiologist, who turned a lifelong hobby of researching sound suppressors into a profession more than 30 years ago. He is one of the owners of a leading suppressor manufacturer, Gemtech, and also consults through his Antares Technologies side-business. Phil, as he prefers to be called, is about to educate me with a graduate-level understanding of cans.

Phil starts with the basics of high school physics, which most of us have forgotten. Sound is a form of over-pressure, a traveling wave that passes through a medium; liquid, solid or gas. If the pressure wave is composed of frequencies that are sufficiently strong and fall within the range of vibrations that affect the human ear, we hear the sound. 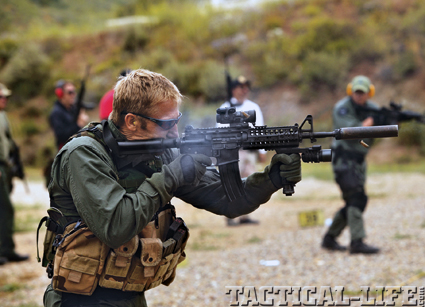 SureFire’s Barry Dueck testfires a First Gen FA556 suppressor which has been upgraded with a better locking mechanism.

What, then, is the sound of a gunshot? I now know it’s a wave of over-pressure, meaning a pressure wave that’s greater than the local pressure of the medium—air. Okay, but how is that sound generated? The answer to this question, it turns out, cuts to the chase of suppressors.