The Upside Of DOWNSIZING

0
SHARES
0
VIEWS
Share on FacebookShare on Twitter
In steep country, ounces count. Most hunters are over-scoped and pack too much glass. As a general rule, a scope should comprise no more than 15 percent of the rifle weight.

It weighs as much as an apple. No bulkier than a goose call, it huddles close to the quarter-rib on my Ruger carbine. The compact 4×20 Burris Timberline seems to me an ideal sight for just about any shot I might take at a deer inside 300 yards. Longer pokes distress me.

Not that we don’t have rifles and cartridges capable of hitting far. I’ve banged away at steel gongs at up to a mile. But most big game is killed close enough for precise hits with a 4X scope. Both deer I shot with that Ruger last year fell at around 200 yards.

Oddly enough, most hunting rifles these days wear powerful glass that’s also heavy. As puzzling, big scopes are often paired with fluted barrels and hollow, polymer stocks. Picture an NFL linebacker on Ono’s bicycle. Moving ounces from your rifle to its scope makes as much sense as putting a chest freezer on a coffee table. The proper place for mass is low—in a photograph, a sports car, a golf club. Most of a rifle’s mass should lie between your hands, not perched above the bore line. 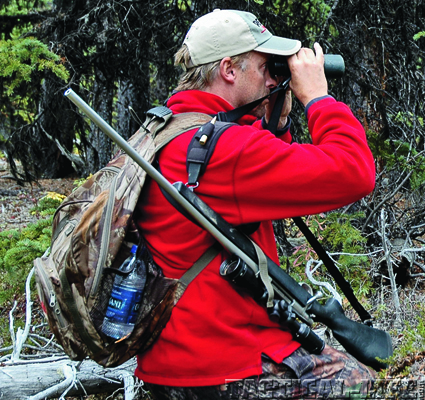 Whatever your final choice is for binoculars, make sure that you shop around for an adequate strap system.

Hewing to this logic, you have a couple of choices: get a heavier rifle or a lighter scope. Shooting from a bench, you’ll find more rifle mass pleasing. It absorbs recoil, and it resists the tremors induced by your pulse and muscle twitches. Afield, mass does the same things, but you must also carry your rifle. If it becomes such a burden as to prevent you from going where the game is, you might as well tote an anvil.

Yes, hunting rifles can be too light. Like racing bikes and supermodels.

Where I hunt, some hills are steep enough to keep your hands on rock most of the time. But even in gentler terrain, a rifle that carries easily brings you more shooting. You stay fresh longer, search more places. When you do get a shot, the featherweight rifle won’t settle as quickly as one with more mass, and it may not corral succeeding shots as tightly. But a sling or a bipod, a backpack or some other improvised rest can help steady it (and you) for the shot. And if you’ve taken care placing the first bullet, warm-barrel accuracy is of no consequence.

O.K., you don’t want to pack unneeded glass. But you think a 4X sight is an anach­ronism, as outdated as those dinosaurs who recommend it. Good news! A 2-7×33 Leupold weighs less than 11 ounces. Figure 13 ounces for 3-9x40s from Nikon, Leupold, Alpen, Sightron, Bushnell, Trijicon, Burris—and a host of other firms selling this popular item. Leupold has a 13-ounce 4.5-14×40! Weaver, whose 10-ounce K4 is my pick for lightweight rifles, offers a 2.5-10×42 that weighs 13.5 ounces. It’s hard to justify heavier sights for all-around hunting. Adjustable objectives, reticle illumination and target knobs boost weight. Bump front diameter to 50mm, and you add heft—6 ounces in Bushnell’s Elite line. A 30mm tube also hikes weight. Burris catalogs five series of 30mm scopes, 1-4X to 8-32X, in weights from 16 to 26 ounces. Variables in the Burris 1-inch stable weigh 12 to 22 ounces. 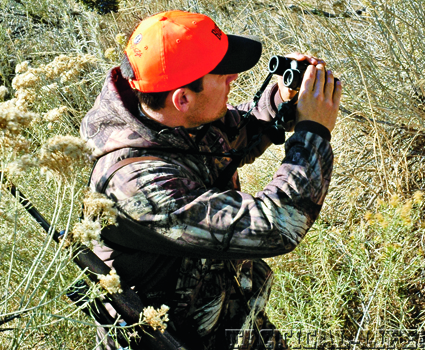 An 8×32 or 8×36 binocular rides easily in all types of hunting terrain. You’ll use it often and ultimately see more game.

I once wrote that a scope should comprise no more than 15 percent of total rifle weight. That still makes sense to me. A lightweight rifle that tips the beam at 7.25 pounds is suitably equipped with a scope of 16 ounces or less. I prefer less. The Leupold 2.5-8×36 and Swarovski 3-9×36, two of my favorite big-game variables, weigh about 12 ounces. The issue here isn’t weight alone; again, it’s also balance. A top-heavy rifle is slow to point and hard to control. Besides the extra mass of a scope with a broad front glass, you must consider its height as you raise the tube so the bell clears the barrel—further impairing balance.

Remember as you shop for scopes that the glass that matters is in the middle of the lens. You get little benefit from most of a 50mm objective because the sharpest image is in the center, where you also find the intersections of the crosswire. Big front lenses transmit more light in dim conditions, but only at high magnification. How often must you shoot in miserably poor light with the scope cranked above 6X, at which power your eye gets all the light it can possibly use from a 36mm objective?

You’ll do yourself a favor applying the same critical eye to binoculars. The world is full of 10×42 binoculars, as it now seems to breed television screens the size of grade-school chalkboards. While you might argue persuasively for oversized NFL highlights, you needn’t carry that television to watch it. After decades toting binoculars, I’m partial to 8x32s. Like the Porro-prism 7×35 B&L Zephyrs that showed me game early on, they’re compact enough to tuck in a jacket. Hung on a short strap, they hug my chest when I belly through sage. The best—Zeiss Victory, Leica Ultravid, Swarovski EL—come in near or under 24 ounces. So does Nikon’s EDG, another fine 8×32. Bushnell’s 8×36 Legend (a great value) weighs 21 ounces. An outstanding new binocular is Swarovski’s bright 8×30 CL Companion, just 18 ounces. 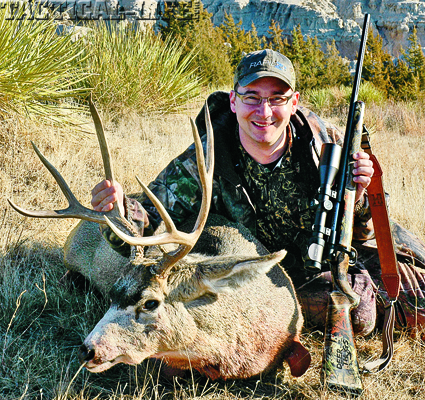 Spotting scopes can be worth their weight where you must see detail in far-away game—ensuring that ram really is a ¾-curl, for instance. Compact spotters are proliferating. Leupold’s 10-20×40 weighs under a pound! But you’ll do better with the 22-ounce 15-30×50. If you can brook more weight, pick a 37-ounce Leupold 12-40×60, one of my favorite hunting scopes. Like the others, it’s a Golden Ring model, with a folded light path to keep it short. The 12X magnification is perfect for finding game fast; 40X is as much power as practical afield. At 15X, you get a big 4mm exit pupil. Slightly heavier is the Zeiss Dialyt 18-45×65, a superb optic with a straight tube and eyepiece, for easy packing and quick sighting. Nikon’s EDG Fieldscope, in 16-48×65 format, and Swarovski’s brilliant STM-HD 65mm scope, are other standouts. On a beer budget? Look to Bushnell and Alpen for top value in spotters. And as with riflescopes and binoculars, buy no more glass or power than you need.