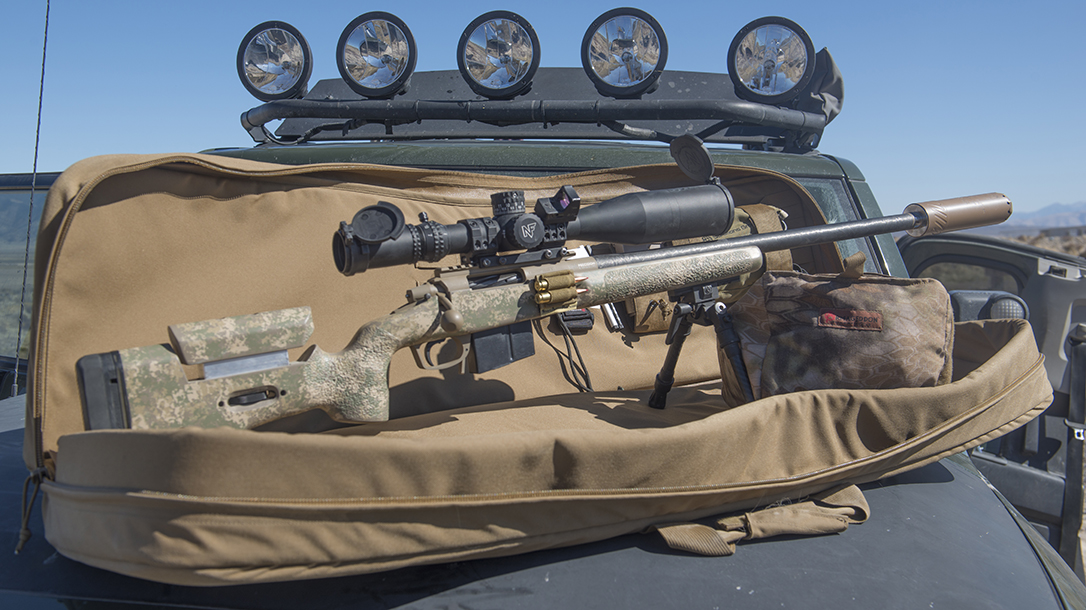 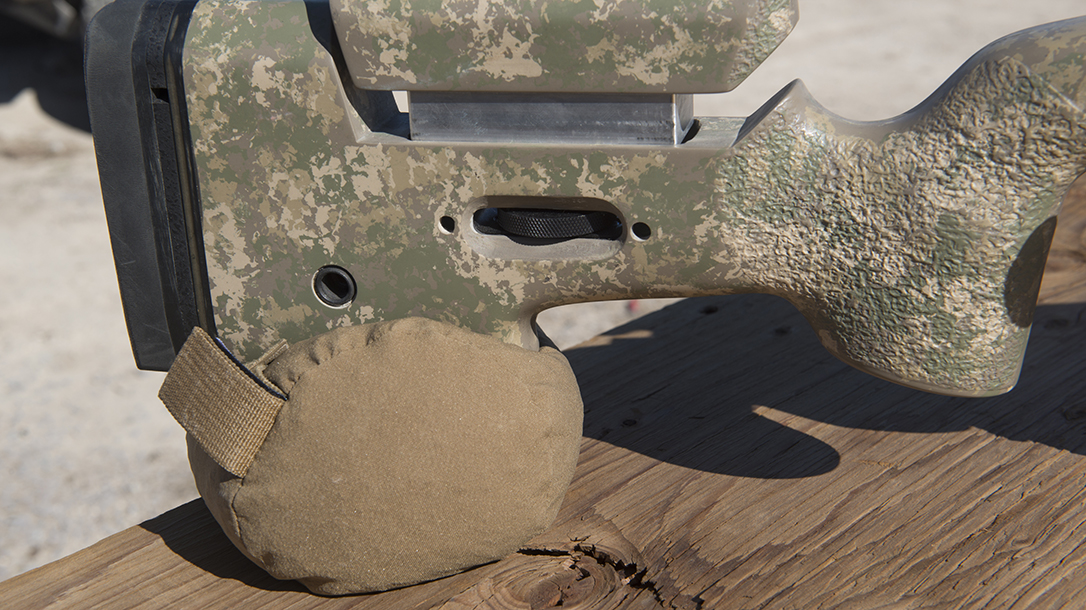 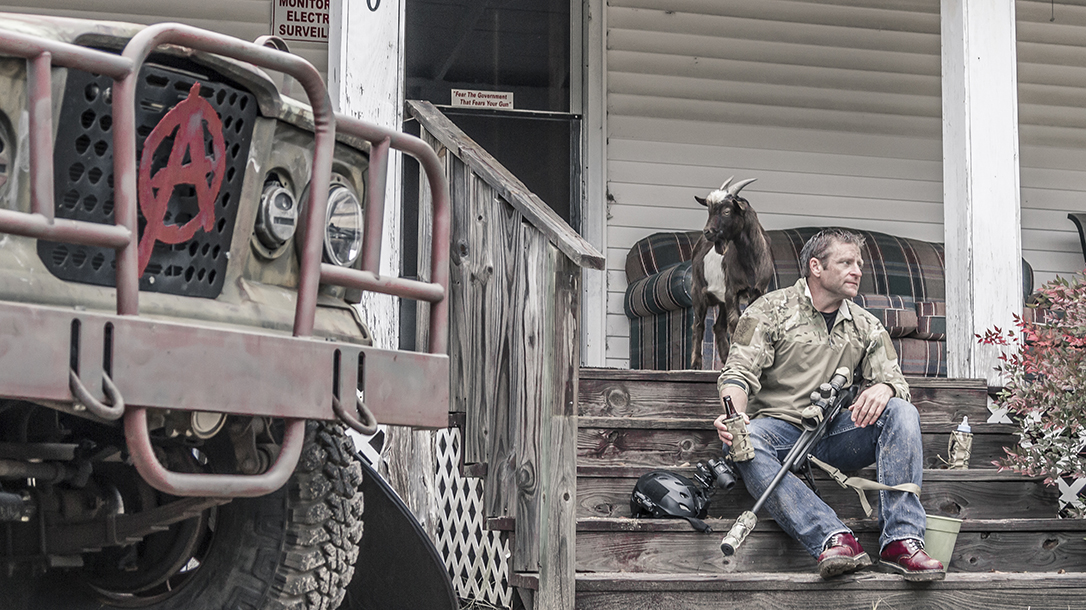 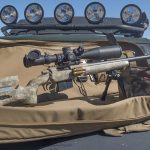 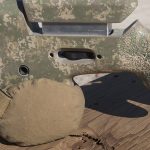 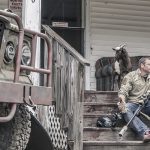 Sometimes it’s easy to forget that the gun industry is made up of people. Much of the media coverage is political, marketing or just entertainment. Outside of celebrities, the people who make up the best parts of the firearms world can be forgotten or left out of the spotlight.

Fortunately, my 10 years as a gun writer has provided me the chance to meet and work with the best in the business—people who have changed some part of the industry without compromising themselves. They work quietly, providing assistance to all they encounter. They are the true quiet professionals—respected, even loved by everyone they deal with. Most, if not all, shun the spotlight, finding the attention uncomfortable. One of those people is Fuller, decorated U.S. Army Ranger, top-tier Precision Rifle Series (PRS) shooter, and founder and owner of Armageddon Gear.

Tom Fuller is a veteran, a very highly decorated one at that. Along with numerous awards, he is a recipient of the Legion of Merit along with a Bronze Star and five Meritorious Service medals. Tom served in six combat deployments with the 75th Ranger Regiment before retiring as a sergeant major in 2009 after 22 years of exemplary service to our country. It was part of this service, his years as a battalion sergeant major over the U.S. Army Marksmanship Unit, that eventually caused our paths to cross. Shortly after retirement, he went to work for Bushnell, where he helped change the nature of high-powered combat and precision rifle optics.

Back in 2012, SureFire invited me to a media event. Rather than a meet and greet with guns, like most SureFire events, it was an actual training course using the company’s equipment as well as gear from other companies. This time it was a precision rifle class held Rifles Only that culminated in shooting from a helicopter. Topping our rifles were Bushnell’s then-new HDMR scopes.

Tom Fuller was there to represent Bushnell. He had actually designed the scope with input from actual Special Missions Unit (SMU) operators. Rather than tell those using the optic what they needed, he listened to actual users to make one of the most rugged high-powered optics ever developed. It was one of the first high-powered optics (3.5-21X) that was compact and durable while offering practical reticles designed for use outside the square range. Price listed well below many competitors at the time as well.

A complete contradiction to what SMU operators had been issued before, which were long, heavy and not particularly dependable, the HDMR proved itself quickly. It really changed the industry, and the HDMR and similar scopes dominated PRS matches for years. It was counter to the culture at the time but exactly what was needed. I still have an HDMR with a Horus T2 reticle that has been used on dozens of rifles over the years. Other companies have started to produce similar designs, mostly at the behest of the military, but this setup will benefit anyone shooting a precision rifle. All because Tom was willing to talk to those who would actually use these scopes in the field, and Bushnell was willing to keep working on it until it was just right.

After spending the week with Tom, it became clear how he got it all done. Not only is he infinitely qualified, but he is also straightforward, honest, articulate and gets along with just about anyone. He is what you might call a “good old boy,” the heart of America. Tom is a devoted family man who has never lost sight of his roots. Along with being a veteran, he’s an avid hunter, fisherman and general outdoorsman. He’s at his best out in the open, and his family will pass on that legacy.

Tom started Armageddon Gear in 2012 in his garage, mostly as a way to make nylon gear for his military and law enforcement clients. Shooting for the GA Precision PRS team allowed him to design and test his products. Initially, he made carbine and PRS slings. Then, a year later, he started to turn it into a real business. With most of the well-known nylon gear companies moving offshore, Tom wanted to create American-made products that wouldn’t break the bank. This allowed him to make tough gear whenever his military and law enforcement contacts called up and said, “Hey, can you build this?”

Most companies hire an “expert” who decides what to make, and you get what you get. But just as he did with the Bushnell HDMR, Tom took input from end-users—professionals and enthusiasts alike—and produced what they wanted. This sort of interaction remains rare to this day, that personal touch and communication with the consumer. It’s collaboration and innovation at its best, and it’s what has allowed Armageddon Gear to really thrive.

In 2013, Armageddon Gear had nine people sewing and a full-time cutting machine. Fuller hired Brenda Taylor, who had run a factory with 200 sewing machines before it sold out to China, really getting things going. Melissa Gilliland came aboard in 2014, starting the move towards the commercial market. A well-known PRS competitor and top shooter, she built Armageddon’s social media and web-based platforms, expanding the brand throughout the country with dealers nationwide.

Thus, in just a few years, Tom’s unique approach and skilled team took Armageddon Gear from a garage operation to one of the most respected manufacturers in the industry, crafting the few truly American-made nylon products on the market today.

Tom Fuller brings a different atmosphere to Armageddon Gear, one that would make most companies envious. First off, rather than market to the “tacti-cool” tough guy, Armageddon Gear targets the everyday shooter. The company’s videos and social media posts are just flat-out fun, often poking fun at the industry and those in it. Spend 10 minutes on the company’s Facebook page and you’ll see just how much fun the employees have.

For Tom, it’s all about the people. Fuller encourages every employee to stay involved in hunting, shooting and outdoor activities. Further, he seeks their input that could help drive new products or help the company grow. Armageddon’s employee get-togethers aren’t quiet, stiff-upper-lip affairs, either. Instead, they’re more like summer barbecues with harvested game, fun on the range and a family atmosphere.

Armageddon Gear isn’t just a company. It is a family that does what it loves doing. While more than a few companies talk that same talk, Armageddon Gear actually does it and continues to grow. Armageddon’s latest adventure, Windcheater American Ale, is a great example of the fun it has with marketing. Omaha Brewing Company brews this special beer. Armageddon Gear issues the beer from the “Meat Wagon,” the company’s restored 1967 Kaiser Jeep ambulance. Once the range is cold, Fuller invites the shooters to hang out with him. Once again, it’s easy to see that the company is all about having fun and building relationships.

But make no mistake: Armageddon Gear makes serious equipment built to the highest standards. I’ve used one of the company’s suppressor covers for the last year and can verify that it is one of the best on the market. Armageddon Gear Products, such as the Game Changer shooting bag, show up at practically every PRS match. I regularly use the company’s Fat Bag and Squishy Rear Bag. Armageddon slings are also extremely popular along with its Competition Data Armband Kits. I also keep an Ultralight Shooting Mat in my everyday pack, which is with me all the time. In short, everything Armageddon Gear makes is both useful and affordable.

Along with an ever-growing list of products made for consumers, Armageddon Gear also provides our finest with some of the best issued gear. The company builds the official carrying case for the U.S. Army’s M2010 sniper system. I use this same case for PRS matches, and it allows me to carry my complete rifle, a rangefinder, a medical kit and everything else I need to compete in a match. It’s long enough for both my bolt rifle and semi-auto, making it incredibly convenient. The CSASS case is similar in design and houses shorter semi-auto variants.

Every interaction I’ve had with Tom Fuller has been a pleasure. His complete professionalism and no-nonsense attitude are rare. There is no pretense; he does not change for the event or you. He is who he is—take it or leave it. Fortunately, that is an honest, hard-working man who is also an incredibly well-trained marksman, an experienced and dedicated hunter, and a hugely successful ambassador for the PRS, GA Precision, Bushnell and Hornady. Tom is also a popular instructor at the GAP Grind, a PRS competition designed to encourage beginners.

Tom Fuller is one of the good guys. In dealing with Tom and those he interacts with, not a single negative impression has emerged. At every turn, he will do whatever it takes to help you succeed. He wants everyone to experience the same enjoyment and success. People like Tom Fuller founded the firearm industry, and we need more of them. 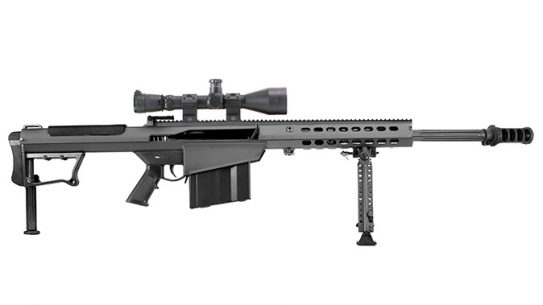