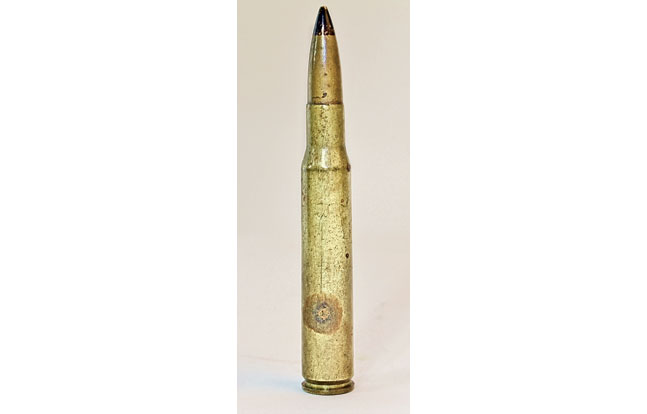 In 1906 the U.S. Military upgraded its main rifle cartridge by switching to a long-range, high-velocity load that featured a .308-caliber, 150-grain FMJ spitzer bullet at 2,700 fps. The .30-06 was chambered in the ’03 Springfield rifle, M1 Garand, BAR, Johnson Rifle and the .30-caliber Browning Machine Gun. It was the main rifle cartridge of the U.S. military from 1906-1957. It was also used by a variety of other nations. Combining the semi-automatic Garand rifle and the ’06 cartridge gave American soldiers a significant tactical advantage in WWII.

The 7.62x54R is a rimmed cartridge developed in Russia in 1891 for the Mosin-Nagant rifle. It is used today in sniper rifles and machine guns by Russia, China and smaller nations. The current infantry version is steel-cased and loaded with a .312-caliber, 150-grain, steel core FMJ bullet propelled at 2,715 fps. In addition to the Mosin-Nagant, it has been chambered in the Dragunov sniper rifle, Winchester’s M1895, the PK machine gun, the Vepr sporting rifle and many other firearms.

The .303 British is a .311-caliber rimmed rifle cartridge that was introduced in 1888 as a blackpowder load with a 215-grain, jacketed, round-nose bullet. In 1891 black powder was discontinued in favor of smokeless cordite. The WWI Mk VII version used a 174-grain, FMJ spitzer at 2,440 fps. This bullet yawed significantly in tissue and was very effective. The now obsolete .303 was used throughout the British Commonwealth until the mid-1950s in Vickers Machine Guns.

The 7.62x39mm is a rimless cartridge designed in 1943 in the Soviet Union. It was developed in response to the 7.92x33mm Kurz cartridge used in the German Sturmgewehr 44 assault rifle. The standard military version of the 7.62x39mm uses a steel case and a 123-grain, .312-caliber, FMJ steel core spitzer bullet at 2,330 fps. It is chambered in approximately 15 million SKSs and about 75 million AK-47s, as well as a number of sporting rifles.

The .30 Carbine cartridge was designed in 1941 for the M1 Carbine. It is based on the old Winchester .32-caliber and has a tapered body and rimless case. This round fires a .308-caliber, 110-grain bullet at 1,975 fps. The gun and cartridge were designed to give artillerymen, radiomen, tank crews, paratroopers and officers a small, light rifle that had more power and greater range than the M1911 pistol.

The 7.62x25mm Tokarev cartridge was originally designed by Fedor Tokarev for his TT-30 and TT-33 semi-automatic Russian military pistols. When fired from TT-series pistols, it propels an 87-grain, 7.62mm bullet at 1,390 fps. The PPSh41 submachine gun was also chambered in 7.62x25mm, and it played a major role in the defeat of the German Army during WWII. While obsolete, Tokarev pistols and ammo are most likely still in military service around the world.

The .45 ACP was designed by John Browning in 1904 and was used in his 1905 semi-automatic pistol. Originally, it fired a 200-grain, FMJ, .452-caliber bullet at 900 fps. After consultation with the U.S. military, and in consideration of the Thompson-LaGarde terminal ballistic study, the standard load was changed to a 230-grain bullet at 850 fps. It was first issued in the Colt M1911 semi-automatic pistol. Shortly thereafter, it was chambered in Smith & Wesson and Colt M1917 revolvers and the Thompson and M3 submachine guns.

The 9×19 Parabellum (9mm) was developed in 1902 by Deutsche Waffen und Munitionsfabriken AG in Germany. The standard military loading propels a 124-grain, .355-caliber, FMJ bullet at 1,200 fps. In WWI it was used in the P.08 Luger pistol and MP18 Schmeisser submachine gun. In WWII, it was standard issue for the Luger and P.38 pistols and for the MP38 and MP40 submachine guns.

The .32 ACP cartridge was used in a variety of small semi-automatic pistols issued to military forces in the U.S. and Europe for the purpose of discreet carry. American forces issued .32-caliber Colt M1903 pistols to general officers and undercover intelligence agents. The military version of the .32 ACP round propelled a 71-grain, 0.312-inch-diameter FMJ bullet at 905 fps. 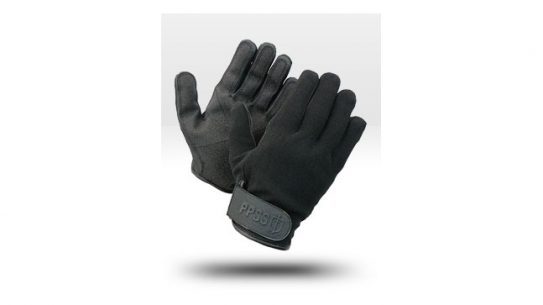 The Slash and Needle Resistant Gloves from PPSS are made with the company's high-performance...