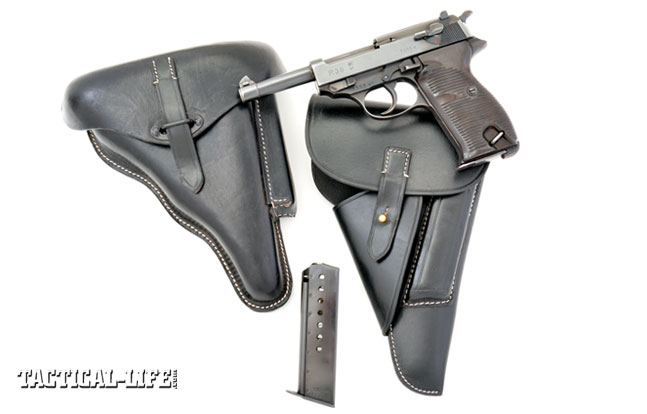 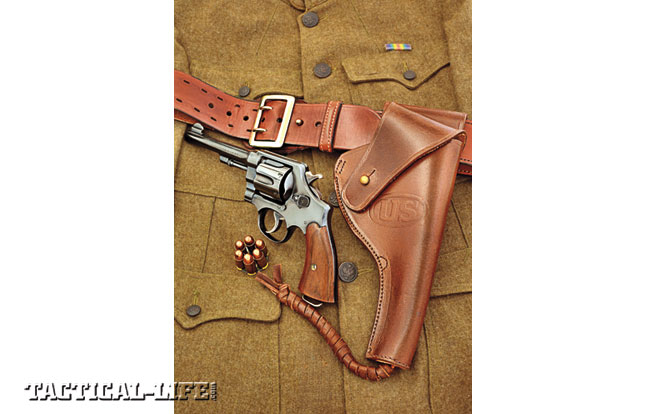 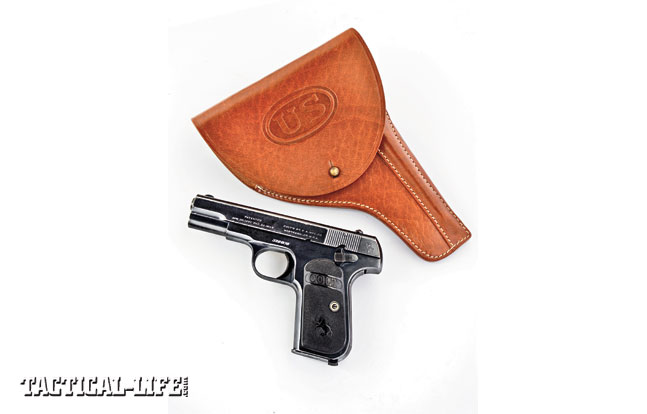 3 of 8
1903 & 1908 Colt Hammerless Model Holsters
General officers were issued small-caliber sidearms, including the Colt’s Model 1903 Hammerless chambered in .32 ACP. An original WWI-era pistol is shown with World War Supply’s copy of the Colt Hammerless U.S.-marked officer’s holster. The holster comes with the special cleaning rod made to carry in the channel sewn into the front of the holster. 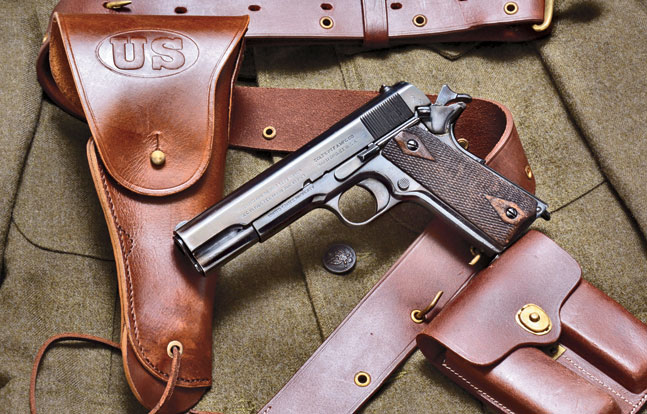 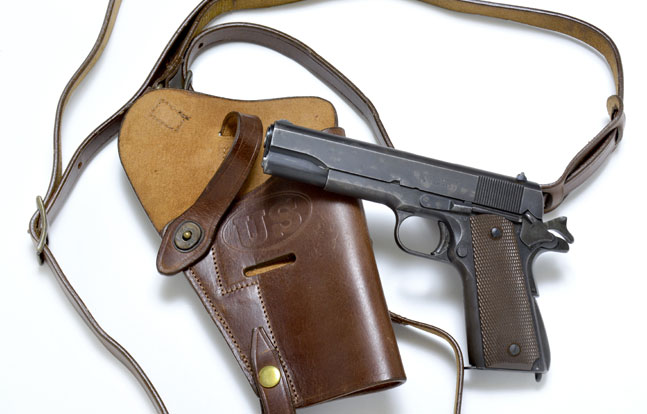 5 of 8
M7 Shoulder Holster
More than 500,000 M7 shoulder holsters were produced during WWII. The reproduction from World War Supply is authentic in all details, and available in brown or black premium drum-dyed leather. (Gun courtesy Allegheny Trade Collection) 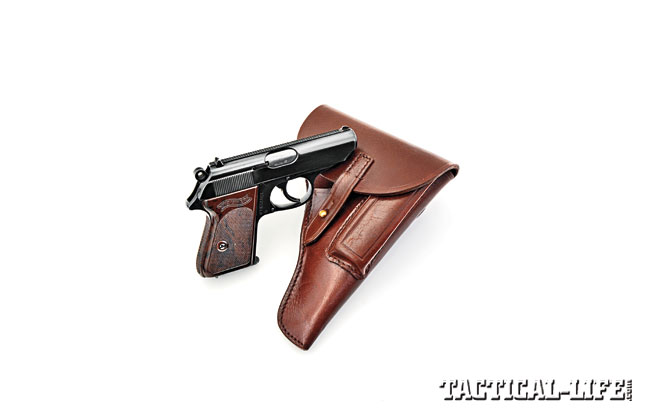 6 of 8
Walther PPK Holster
The Walther PPK was a German officer’s sidearm and was carried in a traditional-style leather flap holster with sewn-on magazine pouch. 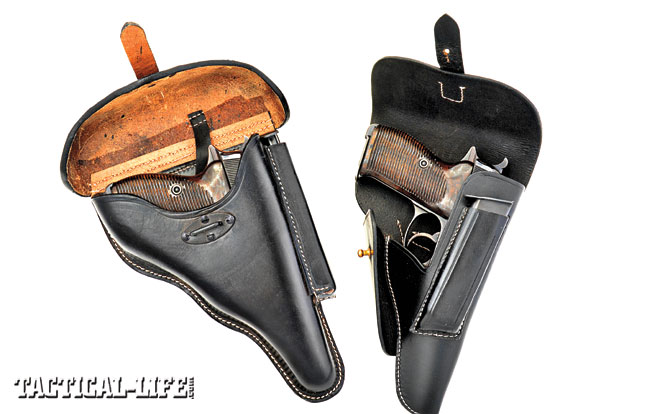 7 of 8
Walther P38 Holsters
Few guns and holsters are as recognizable as the Walther P.38 and its standard hard leather holster. This rugged design gave the P.38 and one extra magazine total cover with a hard, curved cover that securely latched down over a steel loop attached to the holster pouch. At right, the second model (circa 1944) with a soft leather flap and a conventional brass stud closure. 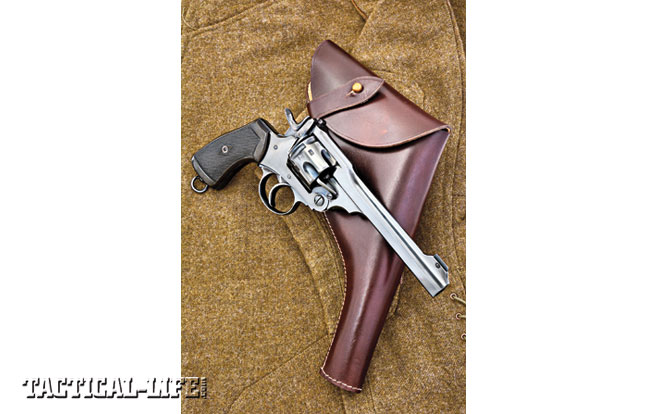 8 of 8
Webley Holster
The classic Webley .455 revolver was carried by British soldiers in both world wars. It is shown with a quality reproduction Webley holster handcrafted in India exclusively for World War Supply. It features the Webley-style reverse closure strap, and on the back is the easily opened belt loop with stud closure. 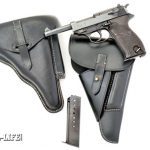 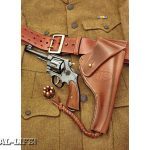 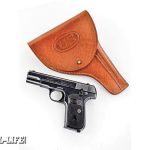 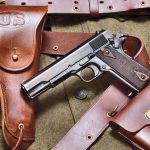 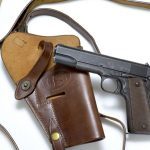 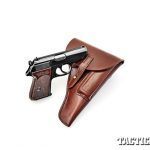 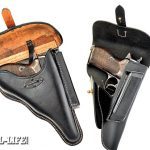 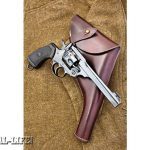 Military holsters are a category of holster unto themselves. Unlike civilian belt rigs, which could combine any number of popular styles or variations to suit the tastes of the customer or even the holster maker, those issued to the military, be it U.S., British, French or German (among others), generally had to meet a specified requirement for design. This could include mounting on a belt or accessory carry for a spare magazine or cleaning rod. Also, nearly all military holsters used during World War I and World War II, regardless of origin, shared a common feature—they were full-flap holsters. There were various means for lashing down the leather flap that covered the entire top of the gun. The most customary was a loop that was sewn onto the holster and through which a strap extending from the flap would pass. The other design was similar, only the strap had a hole or slash cut into it to fit over a brass finial closure attached to the holster.

Even though military holster styles changed between the mid-19th century and WWI and WWII to accommodate newer handguns, including semi-automatic pistols, these two methods of securing the flap remained a constant the world over. Speed of draw was never as important with a military holster as protecting the sidearm from weather and debris; the protective flap was de rigueur. And, while originals can be somewhat scarce and expensive due to rarity, companies such as World War Supply offer excellent reproductions of many for today’s enthusiast. Following is a selection of some of its offerings.

By the mid-1880s, the U.S. military had adopted the Model 1885 belt holster, which used a half-flap variation of the earlier full-flap design. Originally designed for the cavalry, the holster rode high on the waist belt for comfort in the saddle. The fundamentals of this design were passed on through the evolution of the military half-flap holster, which became the U.S. M1917 during WWI for carrying the Colt and Smith & Wesson models of 1917 chambered in .45 ACP. The revolvers were produced to supplement the shortage of Colt Model 1911s in use during the war. Roughly 163,000 were produced for the U.S. military between 1917 and 1919, along with a commensurate number of holsters. The S&W models remained in production through 1946 and were also used during WWII for much the same reason. Colt manufactured approximately 151,000 Model 1917 versions of its New Service .45 ACP revolver during WWI.

The World War Supply reproduction of the U.S. M1917/1942 military holsters for the Colt and S&W .45 ACP revolvers is made from premium drum-dyed leather, bears the original “US” in oval embossing and is handcrafted in India.

On March 29, 1911, U.S. Secretary of War Jacob M. Dickinson approved the selection of the Colt Model 1911 as the “U.S. Pistol, Automatic, Calibre .45, Model 1911.” The government’s initial order was for 31,344 M1911 pistols. With a new standard-issue handgun being issued, a new holster was also required, and by WWI the design was designated the M1916. It was a simple and well-constructed rig built to fit multiple belt types and provide excellent cover for the Model 1911. It was not cumbersome to carry or open, and it was constructed primarily from one piece of leather, which made it easy to cut and assemble. The flap had a teardrop hole to secure it to a brass stud for closure.

The World War Supply copies of the M1916 bear a maker’s mark on the reverse side, “JT&L 1917.” Handcrafted in India from premium, heavy, drum-dyed leather, the holster is perfectly formed to duplicate the original M1916 in its early WWI version, in a deep brown color. A World War II model is stamped on the reverse with “JT&L 1942.”

We all know some U.S. generals chose their own sidearms and holsters. General George S. Patton is famous for his matched pair of Colt SAA revolvers, but officers usually went with the traditional “general officer’s sidearm,” which, during both WWI and WWII, was customarily the Colt’s Model 1903 Hammerless .32 ACP semi-auto or .380 ACP Model 1908. A fine-grade leather holster, a leather pistol belt with a gold-metal clasp, a rope pistol lanyard with gold-metal fittings and two-pocket leather ammunition pouches with gold-metal fasteners were also supplied to officers. Holsters came in russet or black leather (depending on service and regulations) and were primarily made for the U.S. government by Atchison Leather Products in Atchison, Kansas. Two spare magazines were also included along with a cleaning rod, which was stored in a narrow pouch sewn onto the front edge of the holster.

The World War Supply holster is an authentic copy of the 1903 and 1908 Colt Hammerless model holster in russet and comes complete with cleaning rod.

The M7 shoulder holster design evolved during WWII for carrying either the M1911 or a revolver. Simply made and easily worn over the shoulder with a single cross-chest strap, or with a secondary strap around the chest for added security, the bottom of the holster could be cinched to the wearer’s belt with a snap loop. The gun was secured in the pouch with a safety strap crossing over the grip frame. The strap was fitted with a parallel spring snap seated over a brass stud. Roughly 500,000 M7 shoulder holsters were made by Enger-Kress during WWII, and many originals still survive to this day. The standard finish was brown.

RELATED: 3 Top Thigh Rig Holsters and Why They Work So Well

The reproductions from World War Supply, in either brown or black finish, are made from premium drum-dyed leather and are marked U.S. JT&L 43 on the back, with the U.S. oval on the front.

This is a holster as well recognized as the .455 Webley revolvers it was designed to carry. The Webley design is distinguished by its contoured shape to the Webley revolvers, a sewn-in toe plug, a short, high tail flap and a reversed closure strap that comes around from the back of the holster and latches down over a brass finial at the top.

Even more unusual to the holster’s design was a double-stitched belt loop that went though a keeper and latched down over a brass stud. The idea was that the belt loop could be easily pulled from the stud and the holster mounted or removed without having to take off a belt. There was also a brass “D” ring sewn in at the top of the belt loop for attaching a proper military shoulder harness. While it was and remains to be one of the most dashing of all military holster designs, it was actually preceded in the late 1870s by an American-made holster for the Merwin, Hulbert & Co. Army revolver!

German armsmaker Carl Walther developed the first double-action (DA) semi-automatic pistol in 1929 with the Model PP and compact PPK, the latter being introduced in 1931. The DA design was used again in 1938 for the 9mm Walther P.38. Prior to the U.S. being drawn into WWII, the brilliantly designed Walther DA semi-autos were being imported into the U.S. through A.F. Stoeger, which had the new Walther 9mm available in its 1939 catalog for $75. Holster designs, however, were quite different in Germany than the rest of the world, especially for the P.38, which was being carried by German soldiers beginning around April 1940.

There were numerous holsters available for the P.38 during both its wartime and peacetime use, but there are two primary examples most often encountered. German holsters, especially for the P.38 and Luger Parabellum, were complicated designs with many separate parts sewn together.

Original WWII holsters survive because of their robust construction. The World War Supply reproduction is true to the design. Stamped on the back, “P38,” and “cey 42” over the Waffen acceptance stamp.

The second design was produced later in the war and was greatly simplified in its construction. The authentic reproduction from World War Supply is stamped “P38” and “gxy 44” over the Waffen acceptance stamp. This is a lighter and faster handling holster than the original P.38 design.

Just as U.S. general officers were issued smaller caliber sidearms, high-ranking German officers had the option of carrying a Walther PPK. For this gun, the holster was a very simple and traditional leather flap design, but with two added features: a sewn-on spare magazine pouch on the front of the holster and a channel inside the pouch to hold a cleaning rod. World War Supply also makes a reproduction of this holster. 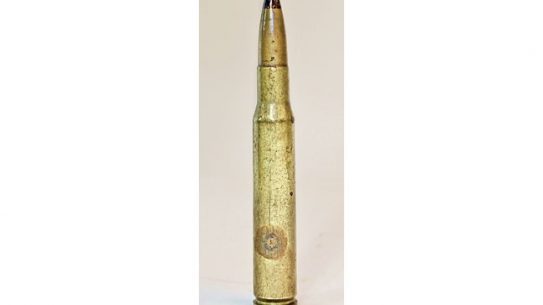 Top 10 Battle-Proven Military Cartridges From Around the World

A rundown of 10 classic combat cartridges from years past.