0
SHARES
0
VIEWS
Share on FacebookShare on Twitter
Benchrest competitor Eddie Chacon adjusts the TARS on the way to an impressive 1/10-inch CTC group from 100 yards.

Trijicon knows combat optics. Their ACOG series has made a name for itself on battlefields across the world. Our troops literally depend on them for their lives. The fiber optic boosted reticle Accupoint line of scopes remains a top choice for both the game field and the gaming field. TW recently got a chance to go “hands on” with the TARS “Tactical Advanced Rifle Scope,” a new generation of combat optics designed for the tactical marksman and operator.

There’s a boatload of top-quality tactical scopes on the world market from makers like Nightforce, Leupold, Schmidt & Bender, Zeiss and Kahles. Trijicon has decided to go head on at these scopes with their newly designed TARS—a variable powered riflescope that is as rugged as their ACOG, but with the precise adjustability that long-range shooting demands. 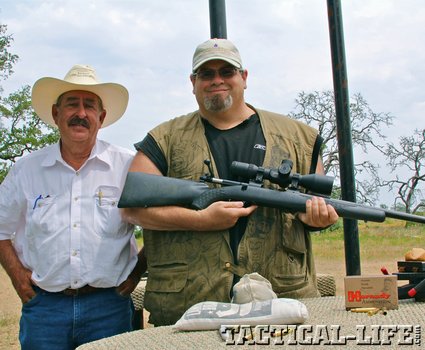 When the hard shell case opened to reveal the weapon-mounted TARS, it was clear that the 3-15X Tactical Scope, at just under 14 inches long and 47 ounces in weight, was certainly a new class of telescopic sight. First, the massive 34mm aircraft-grade 6061-T6-aluminum tube body and 50mm objective lens meant serious light transmission. We shot on an overcast day and the TARS offered an image as bright as clear daylight. The ¼-MOA/click adjustments were positive. 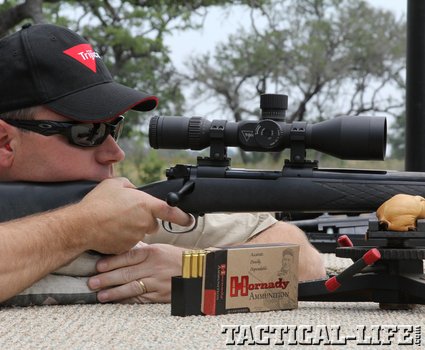 Trijicon representative Eddie Stevenson managed to wring the most performance out of the super rugged TARS, demonstrating the scope’s “absolute zero” technology.