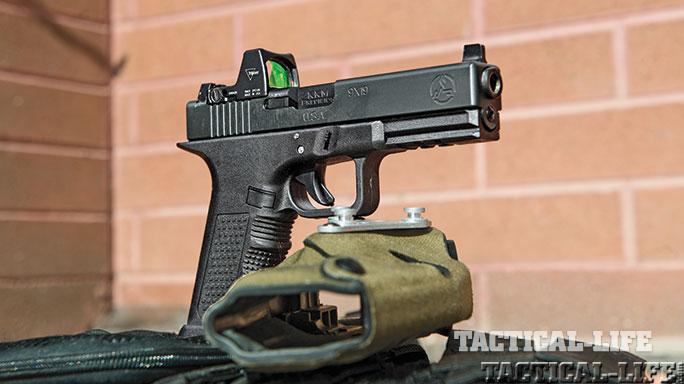 1 of 3
Torture Testing Glocks Fitted with Ultra Fast Reflex Sights
Trijicon’s RMR is one of the strongest mini reflex sights on the market today. It fit perfectly in place on the author’s pre-cut TSD Combat Systems slide. 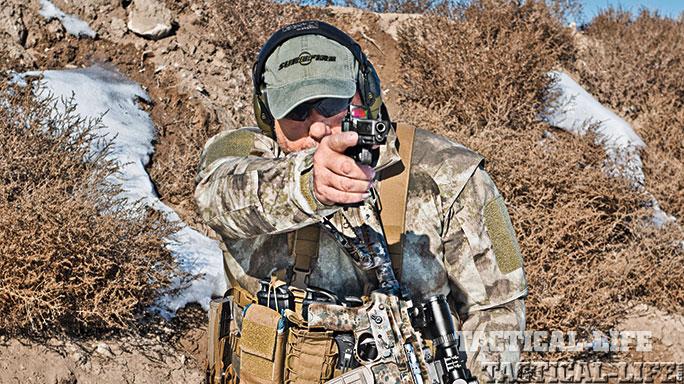 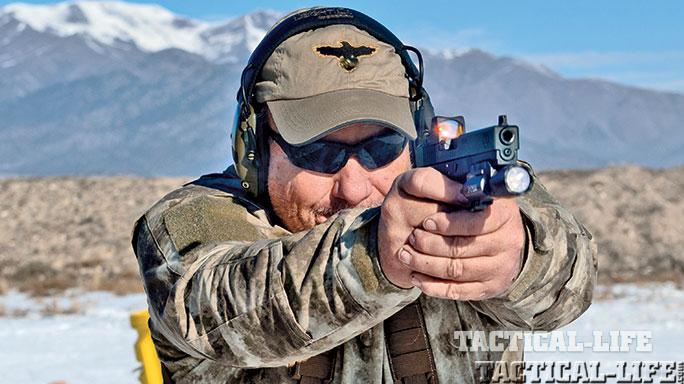 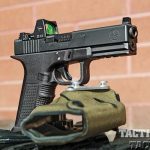 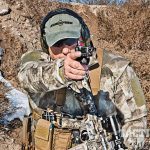 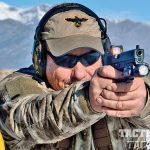 It’s pretty common to see red-dot or reflex sights mounted on rifles these days. Quality reflex sights last a lifetime and will enhance your accuracy. Now that same process has begun for pistols. From a purely functional perspective, there is no reason a reflex sight should not provide the same advantages on a pistol. The sight just needs to be small enough and mounted properly. Several pistols are now made with slides cut to accommodate these miniature reflex sights, making the pistols practical for duty, SWAT operations and even concealed carry.

A couple manufacturers offer factory-made pistols with slides relieved to accept micro red-dot sights. Gunsmiths can also alter pistols for this capability. Adapters are out there, but they mount the sight rather high. Glocks are the most commonly adapted, and several aftermarket slides are available. Configured with or without backup iron sights, taller “suppressor” sights allow for co-witnessing. The rear sight can be mounted in front of or behind the reflex sight.

I recently evaluated the concept of using a fast-targeting reflex sight on duty handguns with two test platforms.

Large-frame Glocks fit me well, especially with some grip work. My preferred Glock is a G20 SF. It fits me well, and a barrel swap has resulted in a soft-shooting and completely reliable .40 S&W pistol. Ernie Bray at Red Creek Tactical stippled my G20’s grip, removed the finger grooves and worked his usual magic on the trigger. A .40 S&W KKM Precision barrel was installed, and I was also given a 10mm barrel. The slide was given Ken Hackathorn sights and a Cerakote finish.

My Timberwolf-framed 9mm pistol most closely resembles a Glock 17. This frame comes with a reduced grip frame, an extended beavertail, interchangeable backstraps and an oversized magazine release. The internals are mostly from the factory, with a Lone Wolf Distributors trigger disconnector. This pistol fits my hand well and points like a 1911. The TSD Combat Systems slide houses factory internals and a KKM Precision barrel. And, just like the Glock 20, it has a Cerakote finish and Hackathorn sights.

Lone Wolf Distributors can cut your pistol’s slide to accept a mini reflex sight, and it offers slides already made for this purpose. I had Lone Wolf cut the G20’s slide to mount the Burris FastFire III. While it cost the same as going to a custom gunsmith, the service was incredibly fast. AmeriGlo Suppressor sights were mounted for properly co-witnessing the irons with the red dot. For the Timberwolf-framed pistol, I installed a TSD slide pre-cut to accept a Trijicon RMR and featuring Trijicon Glock Suppressors sights consisting of a white-outlined front unit and a black rear unit. The RMR bolted right on, and the sights co-witnessed perfectly. Just use the screws provided with the slide so the extractor spring will fit in the slide.

I tested both of these pistols over several months, doing everything with them you might do with a pistol in a duty, deployment or carry environment. I tested both the guns and their sighting systems for speed, sighting, reliability, usability and function. I carried them in off-duty rigs, tactical rigs, on plate carriers, concealed, and as both primary and secondary weapons. I shot the pistols from a number of non-standard positions in both “full kit” and minimal carry modes. Firing from my strong side, off hand, prone, on my back, rolling from side to side and in a number of weather conditions, this was easily one of the most thorough evaluations I’ve ever given handguns. The idea was to not only test their functioning but also practicality and, most importantly, value. Is adding a reflex sight to your duty handgun worth it? Here is what I found.

My accuracy was generally enhanced with the reflex sights, especially as the distance increased. Shooting at 25 yards was faster with consistent accuracy. Initially the reflex sight housing seemed to occlude my vision (especially the RMR), but after a while my eyes adjusted and I could focus on the reticle. Just put the dot on the target and press the trigger. For those married to always having a crisp front sight, this setup might be problematic. Threat- or target-focused shooters will transition quickly. Is using a reflex sight as precise, per se, as lining up squared-off irons? No. Should beginners learn to shoot this way? Not in my opinion. But this was not a target pistol test, nor am I a novice learning sight picture and alignment. For combat pistols in the hands of a solid shooter, the reflex sights were plenty accurate.

Are these sights faster? Yep. Once you get used to using reflex sights, they are quick, especially for well-trained shooters. I think it’s important to keep co-witnessed iron sights, and I like to have the rear sight mounted behind the reflex sight. With this setup during testing, my presentation was unchanged. Shortly after the front sight presents, so does the red dot. Put the dot on the threat and press the trigger; repeat as necessary. Once you stop “looking” for the dot, it is quick. After the first couple hundred rounds, it was very intuitive for me. If you turn the dot off, nothing changes—just use the front sight as always. Set up with iron sights, there is nothing to lose here.

These pistols shined when shooting one-handed, around obstacles, while wearing a gas mask and in unconventional positions. Lining up your iron sights while you’re on your back or side, or working around obstacles, can be tough. The reflex sight is much faster and a lot easier to use. Kitted up and rolling around on the ground with a rifle on my chest, the reflex sights were huge assets. The same was true with one-handed transitions in full kit. Bottom line: The less conventional the position, the more the red dot helped.

Both of these pistols were flawless over a couple thousand rounds of ammunition. Nothing came loose, neither failed, and cycling with both factory and aftermarket recoil springs was unaffected. After a few rounds, you’ll forget the reflex sight is there until that dot comes up. The FastFire III occluded my field of view less but was not as bright, even on its brightest setting. It also has an on/off switch. The RMR was always on and blocked a bit more of my view, but the dot was brighter in daylight. It has proven incredibly rugged and simple, making it my choice for tactical pistols. Its battery life is measured in years, and newer models are adjustable and have some other features.

Holsters are the weak point in this arena right now, especially tactical rigs, but things are getting better. All of my Kydex holsters worked fine, as none of them cover the back of the pistol. Even carrying the Timberwolf concealed in an NSR Tactical IWB presented no problems. Suppressor sights may be too tall for some, but it had no affect on any of my holsters. Many companies now make holsters for carrying Glocks with these sights concealed.

There are a couple tactical rigs out there, but the Safariland ALS series remains the most popular, and it accommodates competition-framed Glocks like the G17 and G34. Safariland’s Optic Tactical Holster is a standalone ALS rig designed with the military in mind. Covered in Cordura, it reduces the IR signature and can be had in several colors, including black. There is a holster to accommodate a light and one without this capability. Mine took just a tad of fitting where the sight makes contact with the edge of the holster. Once it fit, it was excellent. It carried the pistol securely. TSD also offers a holster made by Blade-Tech that fits RMR-equipped G17s and G19s.

Starting out a bit skeptical, I made every attempt to find a reason for reflex sights not being the future of tactical pistols. Honestly, I could not find one, other than a lack of holsters, and that will be fixed rather quickly with increased demand. I would not hesitate a second to carry either pistol on duty. Depending on your department, reflex sights may lack some political correctness, but from a purely functional perspective they are well suited for duty use. They are also excellent for secondary pistols. The only real issue to me is debris covering the sight, which is not something that happens often, but it’s something to consider if you are rolling around in the mud and muck.

This is only the beginning. As reflex sights get smaller and more guns accommodate them properly, demand will surely rise. Just as red-dot sights for rifles became the norm in the tactical world, given time there is little doubt the same will be true of pistols. 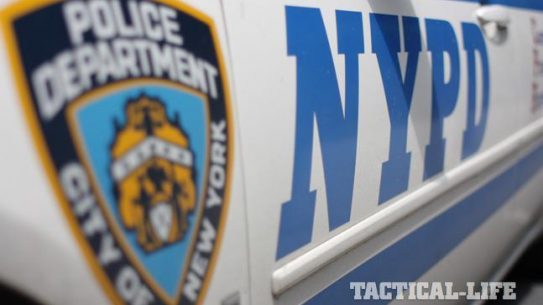 The NYPD will be relocating a few hundred police officers to a new permanent...