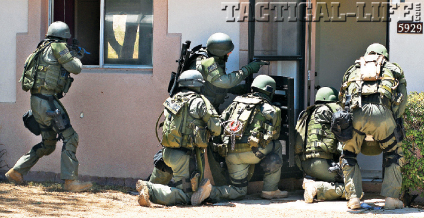 Only weeks apart from one another in the spring of 2009, the deaths of nine officers from California, Pennsylvania and Florida startled the nation and sent shockwaves throughout the law enforcement community. In the wake of the tragedies, every agency involved publicly announced that training policies would be studied and reviewed.

Oakland, California
Two motorcycle officers participated in what appeared to be a routine traffic stop.

The perp moved from the vehicle toward the officers’ motorcycles, catching them off-guard as he sneaked out a 9mm pistol and took down the officers in a barrage of bullets before they could react. He shot them again execution style, as they lay helpless, and fled. Neither Sgt. Mark Dunakin nor Officer John Hege survived.

The murderer fled to his sister’s apartment nearby, where he had stored more illegal weaponry. Fearing that a barricaded gunman situation could have endangered citizens, the SWAT team chose to make positive entry. During the second confrontation, the suspect opened fire blindly through the apartment walls, mortally wounding one veteran SWAT cop. A teammate attempted to drag his downed brother out of the line of the 7.62x39mm fire but he too was shot and killed. A third SWAT man, though wounded, courageously returned fire through the wall, killing the murderer and ending the second encounter decisively. The dead were Sergeants Ervin Romans and Daniel Sakai.

Only weeks apart from one another in the spring of 2009, the deaths of…