The modular design of the AR platform makes it one of the most versatile weapon systems available. By popping out two pins—the takedown pin and the pivot pin—a user can remove one upper receiver and swap it with another so a carbine used for home defense in 5.56mm NATO can be turned into a 300 Blackout or 6.8 SPC rifle to hunt whitetail deer.

If wild pigs are on the hunting agenda, then “thumper” calibers like the .458 SOCOM or the .450 Bushmaster are good options. Even low-cost plinking with a .22 LR upper can keep your shooting skills sharp while keeping costs at a minimum. AR-platform rifles allow users to get the upper hand in any situation. Here’s a look at upper receivers that range from plinkers and trainers to hunters and tactical options.

The hottest and latest caliber to sizzle onto the AR scene is the 300 BLK. AAC offers a complete, drop-in upper receiver with a 16-inch barrel. The barrel’s has a 1-in-7-inch twist rate, and the muzzle features 5/8×24 threading. An AAC 51T Blackout flash suppressor and a KAC URX handguard come preinstalled. The upper is rated for full-auto fire, and it’s compatible with any mil-spec lower receiver. (advanced-armament.com; 770-925-9988)

ADCOR Defense rifles and uppers use a gas piston operating system with a forward reversible/ambidextrous non-reciprocating charging handle. The gas-driven piston is built into the upper half of the forward rail system and does not touch the barrel so the barrel floats freely for increased accuracy. Barrels are available in 10.5-, 14.5-, 16.1- and 18-inch lengths, and each barrel has a 1-in-7-inch twist rate as well as a chrome-lined bore. A2-style flash suppressors are attached at the muzzle. (adcordefense.com; 888-612-3267)

All of the BCM flattop uppers feature laser-etched “T” marks to make consistent remounting of sights and accessories easier. Standard uppers match or exceed GI specs, with a 1-in-7-inch twist, CMV-grade steel, chromed bore and chamber, standard profile and 5.56mm NATO chamber. Barrels are subjected to the M197 high-pressure test load, rated for 70,000 psi, and then undergo magnetic particle inspection to detect any possible flaws in the barrel’s surface. (bravocompanymfg.com; 877-272-8626)

The BHI-15 (S) from Blackheart International combines an A3 upper receiver with a 16-inch barrel that is free-floated in the company’s aluminum, modular handguard system. Chambered in 5.56mm NATO, the barrel has a 1-in-8-inch twist rate and a black nitride finish. The complete upper utilizes the standard direct gas impingement system with a carbine-length gas tube. The muzzle is capped with a SureFire flash suppressor that also doubles as a sound suppressor adaptor. (bhigear.com; 681-404-5656)

Chambered in 5.56mm NATO, the Modular Carbine upper from Bushmaster is assembled with a 16-inch, chrome-lined, chrome-moly steel, fluted barrel with a milled gas block. Four rails on the tubular handguard free-float the barrel for added accuracy. Rubber Sure Grip rail covers are included so the rails don’t snag and it is more comfortable to shoot. The upper has a top Picatinny rail so it is optics ready. BMAS front and rear flip-up sights are included. (bushmaster.com; 800-998-7928)

The Chiappa M4-22 kit has all the parts necessary to convert any mil-spec centerfire AR rifle or carbine into a low-cost .22 LR plinker and training tool. The upper receiver has a 16-inch barrel with a 1-in-16-inch twist specifically for .22 rimfire ammunition. No permanent alterations are required so a user can
easily swap out uppers depending on their need. The kit contains either 10- or 28-round magazine and looks like an M4 carbine upper. (chiappafirearms.com)

This TAC upper from CIV Tactical mates a forged 7075 flattop upper receiver with a tricked-out, 20-inch, heavy-profile, spiral-fluted, stainless steel barrel. The upper has a .223 Wylde chamber, and the barrel has a 1-in-9-inch twist rate. Also included are a low-profile gas block, a 12-inch, free-floating Midwest Industries handguard and a flash suppressor. This upper would do well for competition use or is duty ready for LE/military use. (civtactical.com; 510-637-8650)

CMMG makes drop-in .22 LR conversion kits that are compatible with all AR-platform rifles. The Foxtrot kit includes a stainless steel bolt and carrier, a brass extension bushing, an anti-jam charging handle, a 25-round magazine and a cleaning kit. This kit allows for plenty of affordable trigger time, and it takes only seconds to install. (cmmginc.com; 660-248-2293)

The M4V5 300 URG (upper receiver group) from Daniel Defense features a mil-spec receiver with indexing marks and M4 feed ramps. The 16-inch barrel is chambered in 300 BLK, and it’s cold-hammer-forged from chrome-moly-vanadium steel with a 1-in-8-inch twist rate. A Daniel Defense flash suppressor is also installed. The upper utilizes the standard direct gas impingement operating system with a low-profile gas block that is drilled, taper-reamed and press-fit into place for a rock-solid setup. The handguard is a 12-inch-long, free-floating DDM4 rail. For additional control, a Daniel Defense vertical grip is installed on the handguard. (danieldefense.com; 866-554-4867)

DPMS’s BA-22-16 upper will allow you to shoot more for less money. This .22 LR upper is optics ready and comes with a 16-inch barrel. The heavy bull barrel, made from 4140 chrome-moly steel, has a 1-in-16-inch twist rate. The forged, mil-spec receiver is made of 7075-T6 aluminum, and it has a functional dust cover. The barrel is free-floated in DPMS’ standard, carbine-sized, tubular handguard. One 10-round magazine is included. (dpmsinc.com; 800-578-3767)

The J16 is a complete AR-15 upper with a folding stock. The A3-style flattop upper receiver is made from billet aluminum and is assembled with a free-floated, 16.2-inch barrel chambered in 5.56mm NATO. The upper utilizes a direct gas impingement operating system. The folding stock is attached to a mil-spec lower, and it folds to the left side of the weapon. The J16 also has a side-mounted charging handle. (jardinc.com; 712-324-7409)

Plinker Arms offers three .22 LR conversion kits for any mil-spec AR-15-style rifle. The conversion kits easily allow a user to quickly swap out the centerfire upper with a .22 LR upper that fires inexpensive rimfire ammo for extended training sessions and plinking. The upper is made of forged 7075-T6 alloy, and the complete kit includes an aluminum Picatinny-style rail system, a 25-round magazine and a magazine loading tool. The M4 Upper Conversion has a 16.25-inch barrel, the SBR (short-barreled rifle) kit has a 12-inch barrel, and the Bull Barrel kit features a 16.25-inch stainless steel, match-grade barrel. (plinkertactical.com)

With PNW Arms’ “300 BLK Upper + Ammo Combo,” you’ll get a complete optics-ready upper along with 400 rounds of 300 BLK ammunition—one box of match ammo and 19 boxes of training ammo. The PNW Signature Series upper is compatible with all mil-spec AR-15 rifles. It’s forged from 7075-T6 aluminum and sports a 16-inch barrel with a 1-in-7-inch twist rate. The barrel floats freely in a 15-inch Midwest Industries handguard with three Picatinny rail sections, and the upper also includes a low-profile gas block, a mil-spec A2 flash suppressor, a V.2 Gunslinger charging handle and a high-pressure and MP-tested bolt carrier group. (pnwarms.com; 855-769-2767)

The short-stroke gas piston system POF-USA is known for is built into the P308 complete upper assembly. The 20-inch, match-grade, fluted barrel is made from 4150 chrome-moly steel and is chambered in 7.62mm NATO. The upper also utilizes the company’s new E2 dual-extraction chamber technology for more reliable case extraction. A triple-port muzzle brake is also installed. The receiver is made from 7075-T6 billet aluminum. Black anodized or NP3 finishes are available. (pof-usa.com; 623-561-9572)

The DI-16 upper (“DI” is short for direct impingement) from Primary Weapons Systems (PWS) uses a 16.1-inch barrel with a .223 Wylde chamber. It includes a removeable muzzle device and a 12-inch KeyMod handguard that free-floats the barrel. The upper is only missing the bolt carrier group and charging handle, hence the “stripped” name. The upper is designed for ultra reliability, and it’ll drop into any mil-spec lower receiver. (primaryweapons.com; 208-344-5217)

The Rock River Arms (RRA) 6.8 SPC Coyote Carbine complete upper turns an AR into a coyote killer. The 16-inch, heavy-profile barrel is manufactured from chrome-moly steel and has a 1-in-10-inch rifling twist rate. As its name implies, it has a 6.8 Remington SPC II chamber. A low-profile gas block is installed for more optics-mounting options. A deluxe RRA extended handguard free-floats the barrel, and a Smith Vortex flash suppressor caps off the muzzle. The receiver is an A4 type made from forged aluminum. (rockriverarms.com; 866-980- 7625)

The SIG516 upper will upgrade your AR from the standard direct impingement system to Sig’s short-stroke pushrod system. This operating system reduces carbon fouling and excessive heat for better reliability. It is chambered in 5.56mm NATO, and the barrel is chrome-lined and has a mil-spec M4 profile. An adjustable gas valve allows users to increase the flow of gas when using low-pressure ammo. An A2-style flash suppressor is attached. This upper assembly also includes the recoil buffer and action spring. (sigsauer.com; 603-610-3000)

Chambered in 5.56mm NATO, the M&P15TS upper receiver assembly features a free-floating, 14.5-inch barrel with a 1-in-7-inch twist rate and a permanently attached Smith Vortex flash suppressor that brings its overall length up to 16 inches. The barrel is surrounded by a 13-inch Troy TRX Extreme Handguard. The upper also comes with Magpul MBUS flip-up sights that are made of impact-resistant polymer. An ambidextrous button quickly deploys the sights. (smith-wesson.com; 800-331-0852)

The 8HT upper from Stag Arms uses a gas piston operating system that allows the weapon to run cooler and cleaner than direct impingement systems. Chambered in 5.56mm NATO, the 16-inch, government-profile, chrome-lined, 4140 steel barrel features a 1-in-9-inch twist rate. An A2 flash suppressor is installed at the muzzle. The barrel is free-floated in a Diamondhead VRS-T handguard, and Diamondhead flip-up front and rear sights are also included. The flattop upper receiver is made from a forged piece of 7075-T6 aluminum. (stagarms.com; 860-229-9994)

The lightweight AR-22 LT uses Tactical Solutions’ proprietary aluminum barrel with a steel insert to reduce weight. The complete .22 LR upper assembly only weighs 2.9 pounds. The barrel features a 1-in-16-inch twist rate, and it floats freely within a Hogue handguard. The end of the barrel is threaded to accept flash or sound suppressors. (tacticalsol.com; 866-333-9901) 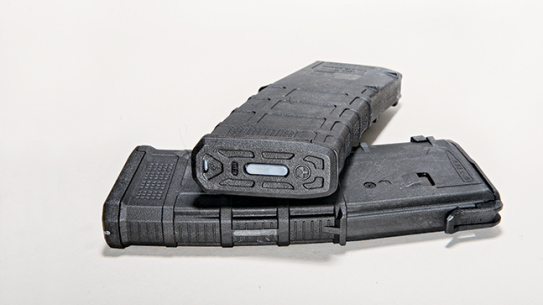 The PMAG M3 from Magpul continues the PMAG's proven legacy of simplicity, ruggedness and...