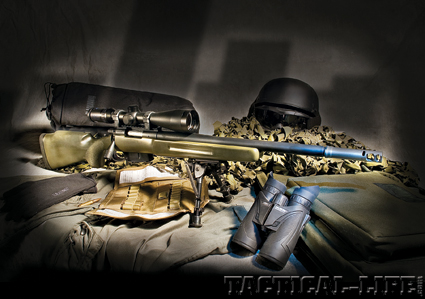 The bolt-action .308 Winchester caliber sees employment across a broad spectrum of fields: target, hunting and tactical environments being the most common. The latter category has grown into an industry of its own, employing hundreds of gunsmiths working in custom shops scattered across the country. Even in a crowded segment of the market, one custom gun shop rises above all others: American Precision Arms (formerly Patriot Arms).

A little over a year ago, I decided to have a tactical rifle built to incorporate the lessons I’d learned after four combat deployments as a Special Forces team leader. The last two deployments were as a sniper team leader so I had developed some strong opinions as to what I thought was relevant for today’s practical sniper rifle. I started asking around at the U.S. Army Small Arms Championships at Fort Benning, GA and made a few phone calls to some of the more talented snipers I’d met over the years.

Patriot Arms
My inquiries landed me on the phone early one morning with Jered Joplin, owner of Patriot Arms. Jered and Dave Walker, the shop foreman, built the first-place-prize rifles in 2007 and 2008 for the International Sniper Competition held at Fort Benning. They’ll be building the 2009 rifles as well. Even for men as busy as they are, Jered and Dave came across as extremely knowledgeable professionals who were willing to make time for me, a total stranger. After a brief introduction, we got to the heart of the issue when Jered asked, “So what are you going to use this rifle for?”

In the ensuing discussion, we talked of the world’s trend towards urbanization and that present and future conflicts would probably be fought in this environment, therefore it made sense to tailor a sniper’s rifle to meet this emerging need. This assumption and my wartime experience would require more emphasis on portability and versatility than the currently fielded crop of 15-plus-pound bolt guns with massive prone-position stocks. The trend towards urbanization demands rifles with shorter barrels, streamlined stocks for positional shooting and the use of premium components to stand up to the rigors of urban combat. Weight of the rifle would be critical as snipers are often required to carry their rifles for extended periods of time.

As an experiment, I encourage snipers to take the ubiquitous 15-pound tactical rifle with its 24-inch barrel on any kind of urban assault exercise. Hustling that beast up and down the block, through doorways and over walls turns into an obstacle course all its own. And, after you’re good and smoked, use an interior doorway as support for several rapid offhand shots at ranges of 50 to 300 yards. You’ll quickly realize that you just don’t need that much gun.

I can hear the screams already: “Sniper’s stalk the target, take one shot and leave! They don’t participate in scenarios like the one above!” Snipers returning from Iraq will say otherwise. Sniping today is very different from the rural scenarios we saw in Vietnam.

Gun Details
To this end, APA (American Precision Arms) built what I think represents the optimum solution for bolt action tactical rifles used in urban environments. They started with a McMillan A1-3 stock. This stock has a forend wider than a hunting stock for better stability when shooting off of flat surfaces like packs, rolled mattresses or bags of rice. However, it’s not too wide to preclude offhand or positional shooting where the non-firing hand is required to support the rifle.

The stock also has the highest non-adjustable comb possible for use with a bolt action. The high comb makes it possible to “lay on the gun” and still have a head position high enough to see down the scope with without taking your head off of the rifle. The comb is non-adjustable so that it’s less cumbersome and not able to fail at inopportune moments. The comb is so high that there is a short groove cut into it to allow the bolt to clear. If the comb were any higher, it’d be impossible to cycle the bolt.

The stock has two flush cups mounted in the side allowing the operator to sling the rifle and have it rest flat against his chest. It’s a nice feature if you’re carrying a backpack and want to avoid the five-minute process of un-slinging a rifle that snags on every protrusion. It’s also much more comfortable and allows for rapid employment. The stock is solid OD molded, not just painted with a thin scratch-prone layer of paint. While not crucial to performance, it’s nice to have a rifle that looks presentable.

The action for this urban nirvana is a Surgeon short action. Surgeon has extremely close manufacturing tolerances and has incorporated several ingenious design features to achieve unparalleled accuracy from bolt-action repeaters. The key to this accuracy is rigidity; the more rigid the action is, the less variance from shot to shot.

For starters, Surgeon mills their actions out of a solid piece of aircraft grade 4340 steel and mills a 20 M.O.A.-bias 1913 Mil-Spec rail out of the same solid piece. This integral rail stiffens the action considerably. The receiver walls are also substantially thicker than production models, also increasing rigidity. The integral recoil lug creates a 37 percent increase in receiver threads where the barrel attaches to the receiver. This sizeable increase in threads equates to greater purchase and a more solid attachment of barrel to receiver. Less movement between barrel and receiver equates to accuracy gains.

Jered and I discussed at length what type of barrel to put on the rifle. We decided that a 20-inch Broughton barrel with a 1:10 twist and a 5.75 contour would be optimal for the field conditions described above. The Broughton is a button-cut rifle that sees three rounds of stress relieving during the manufacturing process before it leaves the factory; the finished product is amazingly accurate. Broughton then hand laps (polishes the bore) of each barrel before it ships. Broughton also has a reputation as being some of the most friendly and professional people in the barrel-making business.

I decided on a 20-inch barrel to make the rifle more portable without losing too much muzzle velocity. Barrel length has nothing to do with accuracy; it only affects muzzle velocity and therefore maximum effective range. Even rifles with 16-inch barrels can reach out to 800m just as accurately as their 24-inch counterparts. We used a twist rate of 1:10 to assist in stabilizing the heavier 175- and 185-grain bullets used in today’s match and long-range ammo.

The contoured un-fluted barrel was chosen for a number of reasons. The No. 1 enemy to any rifle barrel is heat. When the barrel becomes hot, we see a degradation of accuracy and a more rapid onset of throat erosion. There are two remedies for this problem: 1) big, fat barrels that can absorb a lot of heat or 2) fluted barrels that “dissipate” heat. Until I see fluted barrels winning bench rest or F-class competitions, I’ll stick with the proven performance of a big, fat barrel. The problem with fat barrels, however, is their weight. The easiest way to cut weight is with a lower number barrel contour but if the contour is too low (the barrel is too skinny) the barrel heats rapidly and we see accuracy and durability problems. In an attempt to balance the two, Jered and I decided on the 5.75 contour.

Rounding out the components on the rifle was a SureFire flash hider/suppressor mount, Badger Ordnance bottom metal for detachable magazines, and a standard-issue adjustable Remington trigger.

Further increasing flexibility is the Badger Ordnance bottom metal. Detachable box magazines shorten reload times and also make it possible to have more than one type of ammunition readily available should the mission dictate. The sniper can have armor-piercing, match and subsonic ammo all loaded and readily accessible while retaining the ability to rapidly interchange ammo as required. 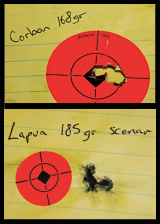 Range Performance
When it came time to pick up the rifle, I was amazed at the level of workmanship. The finish on the receiver, bottom metal and barrel are flawless. Likewise, the fitting of the receiver and barrel to the stock are close and uniform. I immediately noticed how the inletting of the stock followed the contour of the barrel. I smiled and pointed that out to Jered and Dave to which Jered responded, “It sure didn’t come from the factory like that.” I can’t imagine how much time and hand fitting it took to achieve such a detail, but it’s indicative of the level of workmanship found throughout the rifle.

Once I got the rifle home, I placed a Horus Vision “Hawk” scope in some Badger Ordnance rings and mounted the scope to my rifle. Once boresighted, the rifle was ready for the range.

All shooting at the range was done from the prone position off of a Harris bipod. Shooting conditions were abysmal with nonstop rain and gusts of wind: Temperatures hovered in the high 40s for the day.

I had some surplus ammo that I used to sight the rifle in and, once zeroed, moved to some Lapua 185-grain Scenar. I like the Lapua ammo for its consistency and quality and consider the 185-grain load optimal for tactical shooters trying to squeeze every yard of range out of the .308 Win. The heavy bullet has a high ballistic coefficient (a measurement of the degree to which the bullet resists the effects of the wind) and experiences little muzzle velocity variation shot to shot. When making long shots with a .308 Win, Lapua has found a combination that’s hard to beat.

Using 8x magnification on the scope and having no parallax adjustment, the Lapua three-shot group measured .38 inches at 100 yards. I know the rifle is capable of better but under the conditions, it’s what I shot. That day there was plenty of room for operator error. The other ammo that I used in shooting for group size was Corbon 168-grain. The Corbon load, under slightly improved conditions, put three rounds into a .35-inch group at 100 yards.

I’m in love. The stock is ideal for the type of use I envision while the barrel and action are so incredibly accurate that this easily qualifies as the most accurate rifle that I now own.

New Name, Same Guns
In an age when vendors want to sell you a package deal or some other prefabricated contraption, it’s nice to work with such personable master craftsmen who take the time to listen to their customers and deliver a product so much better than anticipated.

Jered has since informed me that due to an ever-increasing number of businesses using the name “Patriot,” he is changing the company name to American Precision Arms (APA). Their website, americanprecisionarms.com, will either route you through to the new company website or have the necessary link to it. For more information, call 706-534-1577. 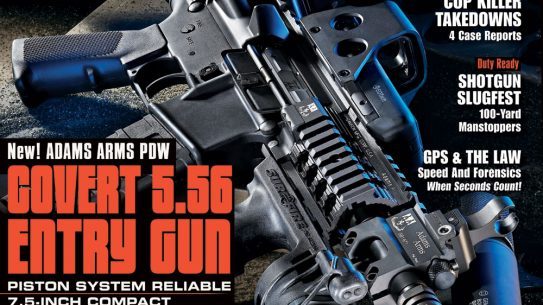 The bolt-action .308 Winchester caliber sees employment across a broad spectrum of fields: target,…