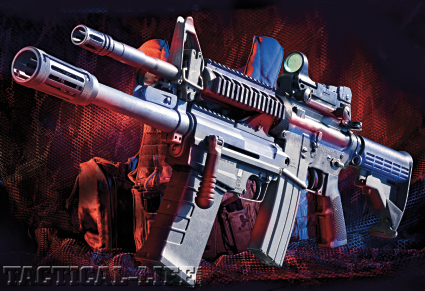 “I prefer to use it as a stand-alone device,” says Sgt. Robert Martuszewski, 82nd Airborne. “It works on the M4 but it’s extremely comfortable to shoot with the stock.” Removing the stock assembly and the M26 can be mated in tandem under the M4’s quad-rail handguard. A soldier on point during a breach may continue with the dynamic entry because his primary weapon is at the ready and immediately accessible. 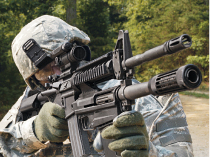 “Right now, if a soldier wants to use a shotgun, he uses a shotgun and slings his rifle, and when he uses his rifle, he has to sling the shotgun and then get out the rifle,” says Major Lawrence Dring, assistant program manager for individual weapons at Picatinny Arsenal. “With the M26, it’s an all-in-one piece. It has a door breaching attachment which goes flush against a door lock and allows the 12 gauge shell to blow the lock off a door and the soldier to room clear without changing weapons.”

Weapon Details
The M26 was developed by C-More Systems and manufactured by Vertu Corporation in response to an urgent call from soldiers heading to Afghanistan. These soldiers wanted a lightweight system that could eliminate the need to carry an additional weapon for door breaching missions or delivery of less-lethal alternatives. In the early stages of development, the (X)M26 started out as a pump action prototype. Tested in combat by US soldiers and a squad of US Navy Seabees, troops complained about the long reach of the early pump model and, as a result, development engineers switched to the current straight-pull bolt action.

With the exception of a right-hand oriented crossbolt safety just behind the magazine well, the bolt assembly completes an ambidextrous theme with a charging handle that can be switched to either side. A small handguard dresses the barrel for weak hand protection and support when operating the M26 in the stand-alone configuration. By removing a pin from behind the triggerguard, the pistol grip and stock assembly can be removed, allowing the M26 to be mounted to an M4 without the use of tools.

Sgt. 1st Class William Kone was part of the US Army’s test and evaluation team at Aberdeen Proving Grounds. He noted, “The M26 has an extendable choke-tube that allows the shooter to place breaching rounds against a door frame from a safe distance with the shotgun attached to his rifle.” The 3-inch standoff device extends and retracts by twisting to unlock, pushing/pulling, and twisting to lock. Without such a standoff device at the muzzle, the risk of damaging the barrel while pressing it into the door greatly increases. The M26 MASS 12 gauge may have been designed as a breaching tool adapted to the M4 but less-lethal shotgun cartridges and the stand-alone capability makes this accessory unique and effective. 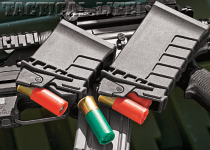 Certainly, many troops will carry the M26 in Condition 1 (weapon on safe, magazine loaded with a shell in the chamber). The 5- and 10-round box-type magazine is secured and removed by means of a paddle catch. Pushing the spring-loaded paddle forward releases the magazine. On the battlefield, magazines can be loaded with 12 gauge ammunition or a non-lethal alternative. Experienced troops might choose to stagger various ammunition types or designate magazines loaded with different types of shells. Marking magazines with different loads provide soldiers with expanded capabilities. Door breachers can use dedicated breaching rounds and switch to slugs or 00-buckshot for increased range and lethality. Less-lethal situations might require a soldier to load teargas cartridges, rubber slugs or rubber pellets.

As a stand-alone shotgun, the M26 is a truly ambidextrous shotgun. A removable Mil-Std-1913 Picatinny rail runs along the top of the receiver in its standalone configuration. This rail also accepts the usual accessories. A non-magnified red dot or holosight are very practical for use with this short-barrel shotgun. The top Picatinny rail extends towards the stock system (when attached) by means of a small segment that is integral with the stock assembly. This detail allows for a shooter to determine optimal eye relief when firing the M26 MASS 12 gauge in the stand-alone configuration.

The detachable stock includes the familiar M4-style ambidextrous collapsible-type stock that will adjust to almost any body types or different levels of body armor. The universal pistol grip is part of the assembly and is similar to the standard M4. Supply systems will certainly have an easier time with replacement parts than if the M26 was completely proprietary.

Mounting brackets used at the front sight and handguard’s slip ring assemblies are used to mount the M26 to a soldier’s M4. When attached to an M4, the firing grip is obtained by grasping the rifle’s primary magazine (like the M203 grenade launcher). It isn’t a comfortable grip but it does provide enough purchase to properly operate the M26. The trigger is similar to the M4 family but more difficult to pull, preventing an inadvertent discharge while firing the M4 under distress.

Performance Details
Soldiers and a small number of media were recently invited to Aberdeen Proving Grounds for a demonstration of the M26 MASS. This was a unique opportunity to experience the performance of the M26 where some of the military’s most secret testing and evaluations are conducted.

Once fired, the operator must grasp the folding charging handle with the non-firing hand to pull it back. This straight-pull action performs extraction and ejection. Push the charging handle forward and the bolt assembly strips another shell from the magazine and drives it into the barrel’s chamber. With another shell in the chamber, nearly three seconds has passed before a follow-up shot is aimed and fired.

The first noticeable aspect when shooting the M26 is the little-to-no muzzle rise. The recoil travels through many points and assemblies held together by pins. Due to the construction of the entire M4/M26, recoil is dispersed in many directions before making its way to the stock and into the operator’s shoulder. Another recoil-reducer is the physical placement of the M26 under the barrel of the M4. Sitting lower than a pivot point in the shoulder, the felt recoil is reduced as the weight of the M4 coupled with the M26 pulls the muzzle-heavy rifle down towards the ground.

The 5-round detachable magazine is robust and holds enough cartridges to make this system practical. The M26 magazine is easily exchanged for speed reloads or a more rapid change in ammunition type. So if the developers were interested in speed reloads, why go with a pump action design? A semi-auto or pump action would have added weight in parts to the MASS and lengthened the overall system with a magazine tube.

With a barrel length under 8 inches, however, effective range is limited, even with slugs. The M26 is engineered to zero with the host M4. Due to the short firing range a non-magnified optics like that of the parent C-More is best suited for accurately operating the M26 in the stand-alone configuration.

Off To Battle
The US Army’s commitment to improving operational capability while decreasing equipment weight has resulted in the first new tactical shotgun concept for the 21st century. The US Army reported to SW, “The configuration selected resulted in the best value for the Army in terms of cost and performance as compared to the requirements in the ORD [Operational Requirement Document].” The training and maintenance needs are not expected to be much different than most other small arms in the Army’s inventory. According to Sgt. 1st Class Kone, “It’s going to have a very high acceptance rate, particularly for the guy who has to carry it around.”

In October 2003, the current version of the M26 underwent operational inspection and test firing before being deployed again in 2004. This time, 200 M26 shotguns were fielded with the US Army’s elite 10th Mountain Division for use in Afghanistan. These shotguns underwent a successful tour firing an estimated 15,000 rounds.

Although its function may be the cause for debate, the M26 will allow the soldier to transition to a shotgun quickly and reduce the combat load of the individual soldier. 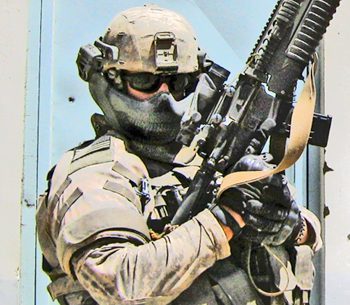