Paul Howe is well known and highly respected in the tactical and firearms worlds. After a brief law enforcement career in the late 1970s, he served for 20 years in the U.S. Army, with 10 of those in special operations. Paul moved through the ranks and served as a tactical team leader and senior instructor while assigned to U.S. Army special operations.

During his special operations days, he was involved in several combat actions, including the Battle of Mogadishu, or “Black Hawk Down.” Upon retirement, Paul started Combat Shooting and Tactics (CSAT) in 2000 as a top-tier leadership and training company.

In other words, if Paul Howe recommends something, you should listen. When it comes to gloves that are built tough and can handle any task, he turns to Mechanix, another highly respected name in the tactical world. In this video, Paul Howe shows off some of the gloves he uses on a daily basis for shooting, chores around the house, cold weather and more.

First up are Mechanix’s durable M-PACT Coyote gloves, which Paul loads in his trucks and bags. Several styles are available in various colors, thicknesses and levels of protection. Another great thing? Mechanix gloves are available at most hardware stores as well as car repair stores.

Check out this quick video and visit mechanix.com for more on each of these Mechanix gloves. 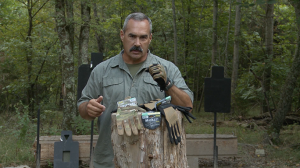