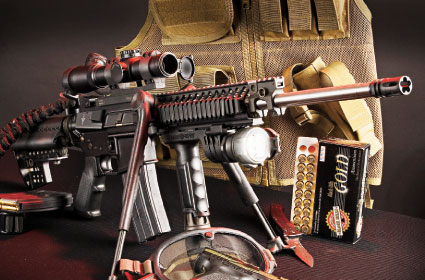 Several manufacturers have introduced AR-type carbines in 6.8 Special Purpose Cartridge (SPC), properly designated 6.8x43mm and the 6.5 Grendel (6.5x38mm) in an effort to upgrade the terminal ballistics of the carbine that has become the mainstay of the US military, but whose performance in the sandbox has been less that satisfactory in terms of terminal ballistics. Upgrading from a 5.56x45mm carbine to either of the larger-diameter cartridges is as easy as changing upper receivers and magazines. There are proponents for both cartridges and there have been many efforts to directly compare them. 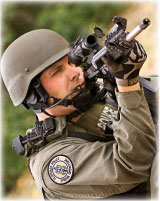 A direct comparison of the two cartridges may not exactly be an “apples and oranges” analogy, and such comparisons are more akin to comparing peaches and apricots. While similar in some ways, the cartridges are different and were designed for quite different purposes. The 6.8 SPC was designed as a close-quarters battle (CQB) to 400-meter cartridge that would deliver increased lethality compared to any existing 5.56x45mm (.223) cartridge.

During the development process that led to the 6.8, cartridges in 6.5mm, 7mm and 7.62mm were tested, all using .30 Remington cases. The current 5.56x45mm and 7.62x39mm cartridges served as baselines for comparisons. Other goals included increased range and energy, better cover destruction, better efficiency and increased bore life.

The 6.5 Grendel, on the other hand, was intended as a long-range cartridge that could be fired from an AR-type rifle. The fact that the 6.5 Grendel became a “de facto” competitor against the 6.8mm SPC came from misunderstanding the different purposes of the two cartridges and the fact that commercial deliveries of 6.8 ammunition were sporadic until recently. This, coupled with the 6.5’s superior long-range ballistics, has caused some to consider the 6.5 Grendel as a potential candidate to supplant if not replace the 6.8 SPC. Regardless, in an in-depth comparison in Infantry Magazine, it was noted that in terms of long-distance shooting, the 6.5 Grendel overshadows the 6.8 SPC. Even at closer ranges, the 6.5 has superior ballistics.

One fact is incontrovertible, beyond 500 meters, the 6.5 Grendel completely overshadows the 6.8 SPC. We have seen reports of sub-half minute-of-angle groups fired from 6.5 Grendel rifles at 600 meters, but since our range does not extend to that distance, we were unable to confirm this claim. We did find, however, that the 6.5 we tested was extremely accurate at 100 yards. That said, we’ll leave the 6.5 versus 6.8 discussion and focus our attention on the subject at hand, that is Vltor’s 6.5 Grendel carbine conversion.

Conversion Details
Like the 6.8, the 6.5 can be assembled on any Mil-Spec AR lower receiver by simply dropping on a 6.5 upper receiver. In fact, this is how we obtained a test rifle. Vltor sent us an upper receiver and a couple of magazines. We had a few boxes of Alexander Arms 6.5 ammunition on hand and got some of Black Hills 6.5 to complete the test. Besides ammo from wolf these are the only sources for 6.5 Grendel we are aware of. We provided the lower receiver.

Because the 6.5 Grendel cartridge has a slightly different profile than the 5.56x45mm cartridge, the 6.5’s magazine feed lips and follower require a slight modification as is the case with the 6.8.

The Vltor VIS (Versatile Interface Structure) upper we received was manufactured and equipped with several items from Vltor.
VIS uppers are available in several lengths, but aren’t currently available from Vltor as complete barreled upper receivers. The VIS user will need to provide their own barrel, bolt, bolt carrier and charging handle for the moment. VIS upper receivers use standard AR barrels and all components necessary for fitting the barrel are included.

The basic VIS provides an uninterrupted MIL-STD-1913 rail from the rear of the receiver all the way to the gas block, two MIL-STD-1913 rails on the sides and a fourth on the removable bottom half of the handguard. The removable bottom half facilitates installation of an M203 grenade launcher and helps with cleaning. In addition, the VIS free floats the barrel. There are four lengths of VIS to accommodate just about any barrel length: VIS-1 Carbine (7 inches), VIS-2 Midlength (9 inches), VIS2A Extended Midlength (10 inches) and standard rifle (12 inches). Our sample VIS was the standard midlength but with a few extras.

A major innovation is Vltor’s tactical bipod that mounts on top of the handguard rather than the bottom like conventional bipods. What’s the big deal about Vltor’s top mounted bipod? Mounting the bipod on top lowers the center of gravity of the rifle by approximately 2 inches, making it much more stable and less prone to being knocked over when someone accidentally bumps against it with their foot. Don’t laugh, I’ve seen this happen many times when rifles are sitting on their bipods. Vltor’s bipod doesn’t absolutely prevent the rifle from being knocked over, but it significantly reduces the chances of that happening.

Another feature is Vltor’s proprietary muzzle brake that significantly reduces flash. Finally, the VIS conversion came with Vltor’s fully adjustable back-up iron sights (BUIS) that lock firmly into place when up and rise easily with the touch of a finger.

I used a match grade P415 lower from Patriot Ordnance Factory (POF-USA) for the bottom end. Because of its high quality and the fact that the POF USA lower came from the factory set up the way I like it with Vltor’s Modstock and single stage match trigger, I mounted the 6.5 Grendel on the POF USA lower. Vltor also offers Modstocks for full-size ARs and even for M14/M1A-type rifles and AKs.

Modstocks provide waterproof storage for small items and batteries for electroptics that are so prevalent in today’s tactical shooting milieu. Modstocks also provide a broad flat cheekrest that’s so far superior to the rounded stock on standard M4 type carbines that I can only wonder why most manufacturers do not offer Modstocks as an option or even as standard like POF.

The stock is comfortable and places the shooter’s eye in an ideal position for either open sights or optics. I like Modstocks so much that I fit any test rifle or carbine that comes our way with one, whether adjustable or full length. A Modstock makes a significant improvement in the “feel” of any rifle or carbine on which it is fitted.

Leupold Mark 4 1.5-5x20mm
Modern optics are very rugged, much faster on target and are more accurate than open iron sights. Iron sights require that the shooter focus on three separate elements: rear, front and target. Aligning the front and rear sights is critical if the shot is to be accurately placed and a small misalignment of the sights causes gross errors in aim. With an optic, there is no sight alignment necessary. All the shooter needs to do is place the reticle on the target and shoot it.

For our 6.5 evaluation, we chose Leupold’s Mark 4 1.5-5x20mm MR/T riflescope recticles. Once zeroed, the scope has “hash marks” that delineate distance in mils, enabling the user to engage targets from CQB out to the scope’s effective range without dialing in clicks. Adjustments are in 0.5 MOA increments and the reticle is in the second focal plane, which basically means that it stays the same relative size regardless of magnification. The reticle is illuminated in red so as to not interfere with the shooter’s night sight, but with state of the art night vision like that described below, illuminated reticles aren’t necessary.

We are seeing more and more carbines and rifles like the test Vltor equipped with MIL-STD-1913 rails that extend ahead of the day optic to accommodate the PVS-22, which delivers night vision capability that surpasses that of the PVS-17, yet is significantly smaller, far more versatile and user friendly. Sales of OSTI NVS are restricted to law enforcement and military and require State Department approval for export outside the US.

SureFire M900
I also installed a Surefire M900 Vertical Foregrip WeaponLight with an optional infrared (IR) filter. This versatile foregrip/high intensity light has ambidextrous momentary activation pads for the main battle light, a constant on switch and a momentary push switch for the two integral low output LEDs that are used for stealth navigation. This light emits 125 lumens of high intensity focused light for an hour and attaches to the bottom MIL-STD-1913 rail via an ARMS throw lever.

While the OSTI PVS-22 is great in night vision technology, it requires some light and so in ineffective in total darkness. For situations like this, the SureFire IR filter is rotated into place over the lamp lens, enabling the carbine user to clear using IR light that is invisible to the human eye. Of course, IR can be detected by other night vision optics, but the IR Surefire coupled with the PVS-22 is about as good as it gets.

Range Time
If there is any limitation to the 6.5 Grendel, it is that presently there are only three manufactures for it, Black Hills 123-grain Sierra MatchKing, Wolf and Alexander Arms 123-grain Lapua Scenar hollow point boattail (HPBT) match bullet. The Alexander Arms 123-grain remains supersonic beyond 1000 yards due to its very high ballistic coefficient (BC) of 0.547.  Other loads are in development and should soon be available. These include a 90-grain Speer TNT (BC 0.281), 120-grain Nosler (BC 0.458) and 129-grain Hornady SST (BC 0.485). The testing proved that the 123-grain loads were indeed very accurate.

The test rifle had an 18.5-inch barrel (20 inches with the muzzle brake) and put every round essentially into a 0.5 minute-of-angle (MOA) group. I had one called flyer in the best group of the day and it was only 0.75 inches outside the main 0.5-inch group. In fact, the first three of five shots were touching and if I consider only those first three as many shooters do, the group shrinks to about 0.25 inches! Not bad for a gas gun!

Shooting was otherwise uneventful. The two-stage POF match trigger broke at 3.5 pounds. There was not a single stoppage during the entire day’s shooting. Felt recoil was about the same as a .223, although I didn’t do a side-by-side comparison. Brass was positively ejected almost straight out the ejection port, landing about four feet from the rifle.

Final Notes
The 6.5 Grendel brings a new capability to the AR for anyone who owns such a rifle. First, it is a cartridge that delivers true long-range performance to 1,000 yards and beyond. Since the 123-grain bullet remains supersonic to approximately 1,200 yards, accuracy should not suffer, as the transition from supersonic to subsonic velocity is a major factor in loss of accuracy because the bullet tends to become less stable as it transitions back through the sonic barrier. For the military user, this is good news.

For law enforcement, the 6.5 provides an extremely accurate rifle that not only is far more lethal than any .223 but enables quick follow-up shots. It is thus ideal for use as a perimeter rifle, CQB carbine in shorter barrel lengths, or with 20- or 24-inch barrels, for duty with precision tactical marksmen.

The cartridge and rifle combination offered by Vltor is a superb package that delivers the goods. 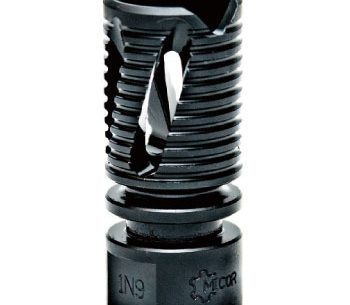 New Special Weapons and accessories for Military & Police in April 2009.