You’ve heard it before: “I can’t understand that shot. Scope must have been off.” Truth is, scopes hardly ever conspire against you. They can fail—fogging and reticle breakage were reasonably common in my youth—but modern scopes are nearly foolproof. Nearly. A fool can still render them useless.

Many bungled shots can be traced to a flawed zero. Zeroing or sighting in a rifle is properly done when you’ve no other chores waiting or people talking to you. A hurried few shots does not a zero make. Nor should you zero on soda cans. After boresighting, I fire from a rest at a small target on big paper 35 yards away. I adjust the sight after the first shot, again if a second is necessary. No sense burning ammo here—I’m simply getting holes on paper. Moving it to 100 yards, I adjust the scope so bullets hit 2 inches high. Most frisky loads then strike point of aim at close to 200 yards, and stay within 2.5 vertical inches to 250 yards or so. I check impact by firing from 200, 250 and 300 yards. Then I get off the bench. 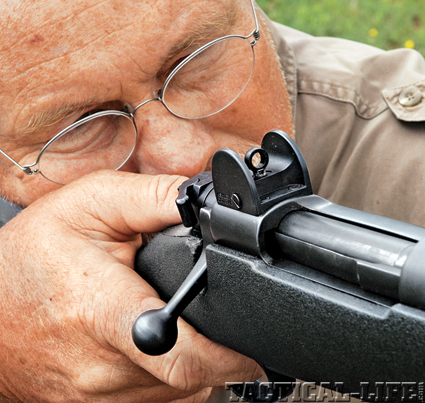 Ashley Emerson fires a Model 70 with a sight he designed for rugged use. Note the big aperture, an aid to fast shooting.

Position Pointers
Your position affects the point of impact. A rifle free to bounce off a sandbag or a padded shooting rest throws the bullet to a different spot than it does when you’re wrapped in a tight sling. A .30 Magnum that gave me tight, centered groups at 200 yards from the bench delivered equally tight groups from prone with a sling—but impact shift was a full 4 minutes (8 inches!) to 7 o’clock. I re-zeroed, because on a hunt I typically shoot with my Brownells Latigo as taut as a violin string. Such wide variation due to position is not the rule, but you can expect some shift. The only way to find out how much is to shoot at paper.

“If you fight the rifle, it will always win.” Earl Wickman’s fiery mop was dimmed by the smoke from his omnipresent cigar, and the blue lead dust that curtained my sight picture in his basement range. I remember that mantra because, decades ago, he repeated it often. It still applies. “A rifle wants to point somewhere,” he’d tell me. “Your job is to let it. Point your body so the rifle wants to point at the target.” He championed bone support, relaxed muscles. “Force that rifle onto the target, and at the last instant it will rebel. Instead, make your body a bench. Hold the rifle where it wants to point. The hits will come.”

Remember that even if your shooting position is solid, the rifle moves as you finish squeezing the trigger. Some of that movement comes from your pulse, muscle twitches, trigger travel and the pressure of your shoulder, hands and cheek on the stock. As the striker drops, it creates vibrations within the rifle. Ignition and building pressure in the case add movement. When the bullet enters the rifling, it transmits torque, and as it travels down the bore, the barrel shudders violently. All this shifting affects the position of the muzzle in space. Sling tension and upward pressure caused by a rest or a bipod under the forend deliver a final vote as the barrel fires the bullet downrange.

Of course, if you flinch, a center shot becomes as likely as a date with Heidi Klum.

I’m convinced many errant shots in the hunting field result from poor shooting positions. Others follow a flinch. Jerking the trigger is a flinch. I did that last month, muffing an off-hand shot that would seem easy to a child with sprained fingers. No one is immune from anticipating a shot. The more violent the rifle on discharge, the more likely the flinch. Practicing with light loads helps you fire without flinching.

Got a Screw Loose?

Inexplicable misses seldom are, if you look hard. Once, after hitting an eland poorly from prone with an accurate rifle, I checked the zero on paper. The first shot was on target. The second flew wide left. A series confirmed a back-and-forth pattern. I checked the windage screw on my scope mount and found it loose. The ring was bouncing left and right on recoil, changing point of impact. Screws can work loose. I tighten base screws as much as I dare, ring screws as snug as the short end of an L-shaped Torx wrench permits. Also suspect: loose guard screws, which affect bedding. I cinch the front screw aggressively, the rear screw with a bit less fervor. Center guard screws (as on Winchester 70s) should be only snug. 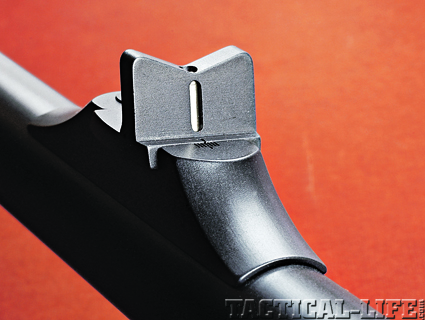 Much is made of parallax by shooters looking to optical failure for alibis. Parallax is the apparent shift of the reticle on the target when your eye moves off-axis behind the sight. Most scopes are corrected for parallax at 100 or 150 yards. There, parallax does not occur, no matter your eye position. Adjustable objectives let you control the parallax-free distance. Aiming with your eye out of the scope’s center can cause error from parallax if the parallax is not “zeroed out” at that shooting distance. If your eye is on the scope’s optical axis (so you see a full field), parallax won’t result in aiming error, no matter the distance.

A scope performs best when the erector tube inside is close to center—in the middle of its range of adjustment. That’s because it more nearly aligns with the optically superior centers of objective and ocular lenses. Also, pushing the erector tube to extremes exerts uneven pressure on the springs that hold it against dial pressure. Still, no matter the erector tube’s position, it should remain stationary under recoil. If, after repeated shooting, you suspect a shift of optical components, replace the sight. 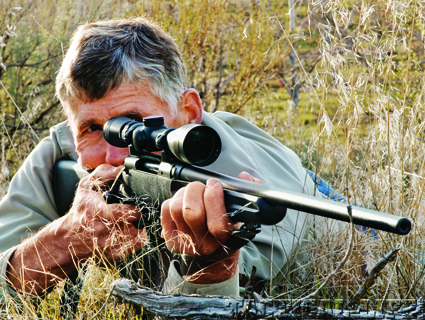 The author fires prone. He has found that a taut sling typically brings point of impact to 7 o’clock, relative to a bench zero.

Recently, I checked zero on a Model 99 Savage equipped with a 1950s-vintage scope. Bullets hit high and right. After adjustment, they flew low left. More shooting and clicking showed me that, instead of moving point of impact a quarter-minute per click, the scope delivered 4 inches of horizontal movement and 5 inches of vertical movement per click! Is this scope useless? No—unless it won’t hold zero. After I get it dialed in, I don’t care about click values.

If you’re shooting long with a scope designed for adjustment to specific ranges, clicks do matter. The GreyBull scopes on my Magnum Research rifle in 6.5 Creedmoor and my custom-built Remington in .338 Norma wear 0.33-MOA elevation dials scribed to match the trajectories of specific loads. If I dial the Creedmoor to 6, I’ll get center shots at 600 yards. Much shooting at long range has confirmed that. You must have unfailing repeatability in such adjustments if they are to be of any value.

Bullets should land where you expect them to. Given accurate estimates of wind and distance, a clean let-off and a solid position, surprises should be, well, surprises. Alas, scope failure remains unlikely. In fact, it’s less likely now than ever before. Most shots gone awry can still be traced to what’s behind the eye behind the sight.