Optical sights have been used for sniping rifles since pre-Civil War. The term “optical gunsight” refers to those sights designed for battle rifle use. These are recent innovations. The first instance I remember a tactical optical gunsight being used was during the November 1970 Son Tay Raid to rescue US POWs (prisoner of war). An early Armson OEG sight designated the Single Point was used by the raiders. Since civilian mounts available for the Single Point were not expected to hold up in military service, they were reinforced with duct tape. The conventional military wisdom for decades was that optical sights would not hold up to combat usage on rifles. 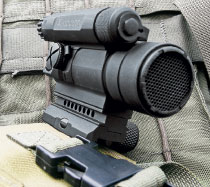 The adoption of the L85A1 rifle with its SUSAT (Sight Unit Small Arms, Trilux) optical sight by the British armed forces helped dispel this myth. Ironically, there were all sorts of problems with the L85A1 but only a few with the SUSAT. I was skeptical the first time I had a chance to shoot an L85A1 with a SUSAT, but became a convert after viewing results at 500 meters with the 4x sight.

The SUSAT employs tritium to illuminate the reticle at night. The reticle itself takes a bit of getting used to. It uses an obelisk-like post for sighting by using the point of the post or an interior slit in the post. Nearly 25 years later, the SUSAT is still used by the British service.

SOPMOD Kit
Other military units experimented with optical sights for battle rifles, especially for special operators. An important development in the US Army by the mid 1990s was the SOPMOD (Special Operations Peculiar Modification) kit for the M4 carbine. It contained Trijicon’s TA01NSN 4x32mm ACOG (Advanced Combat Optical Gunsight) optical sight and Trijicon’s RX01M4A1 reflex sight. The kit also came with infrared and white light illuminators as well as night vision optics. Later versions of the SOPMOD kit include Aimpoint and EOTech optical sights as well. Once the SOPMOD optical sights had proven themselves with operators, they began to see service with airborne and airmobile infantry units and then other infantry units.