Though I might be one of a dying breed, I am an officer that carries and deploys a shotgun for both street and entry work. As police departments move to the rifle, shotgun-carrying police officers have become less prevalent. But if given the ultimatum of carrying just one long gun, it would be my first choice in most police situations. It does most things inside 50 yards better than any other long gun and out to 100 yards is no slouch with the right ammunition and operator. Since most of what we do falls inside that 50-yard mark, it is a viable, versatile, and highly effective tool.

I have certainly spent a ton of time with M16-type rifles, submachineguns, and everything else that can be deployed in a SWAT environment, but I still run a shotgun. To this day, I recall hounding my department armorer for a shotgun. Working the street as a patrol officer, I wanted something other than my revolver. As is the case today, our city had some pretty serious criminals and the shotgun just seemed to even the playing field. In those days, as was common for small departments, it took him awhile but he finally raided the evidence locker and issued a Remington Model 870 with a metal folding stock. Apparently taken in a drug raid, it was hammered, had no stock pad and a short magazine tube, but it was a shotgun and it worked.

Rifles and subguns are very effective, but a shotgun is very versatile. It is almost like a 1911, they are simple and can be used effectively in almost any tactical situation a police officer could face. They also have one critical advantage, stopping power. There are very few people that will argue about the fight-stopping capabilities of a shotgun. As the conversation turns to the rifle-versus-pistol caliber argument, the big bullet/little bullet question, and the penetration or non-penetration issue, there is little argument as to how effective buckshot or slugs are at stopping the threat. With the changes in modern shotgun ammunition none of that stopping power has been affected, they are just more accurate and the patterns get tighter and tighter. That has added to the versatility of the venerable 12 gauge shotgun. 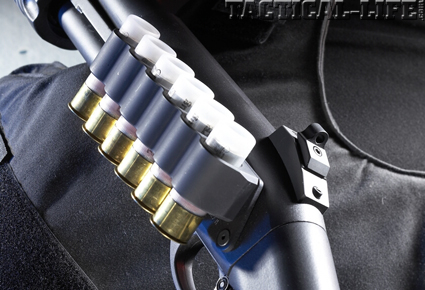 I tested a Wilson Combat Standard Model shotgun that had two upgrades, a Knoxx stock and Mesa Tactical SureShell shotshell carrier. As I removed it from the bag all I could think was “man, whoever put this together as a package did everything right.” This is truly a take it out of the bag and go to work shotgun. It has all the options you would need and use, with no fluff attached. I put the Standard Model to work, right out of the bag.

The Standard Model is based on Remington Model 870 and has an 18-inch cylinder bore barrel with a full magazine extension. The 12 gauge shotgun is coated in Armor-Tuff. It has a Trak-Lock adjustable rear sight with an easy-to-see front sight containing a tritium insert. The package also includes a high-visibility follower, an extra-power magazine tube spring, and a tactical sling.

The Standard Model comes with a SureFire fore-end equipped with a 6-volt tactical light. This setup is the best bet for a slide-action shotgun. While I will use other set-ups on my semi-automatics, the integrated light mount, although expensive, is the most versatile for the pump guns. It is always there, won’t fall off and the added weight on the fore-end can actually make operation smoother.

At an additional $155, the upgraded stock is a Knoxx SpecOps that is length-of-pull adjustable and has a pistol grip. The pistol grip is a point of discussion with many shotgunners, but I prefer it on all my tactical long guns since it allows me to run them all pretty much the same way. One of the most critical and irritating issues is length of pull. Running a shotgun can be cumbersome and down right hard work if the stock is too long. This becomes an even greater issue in tactical gear. This stock allows for both and worked perfectly for me during the testing phase.

The Mesa Tactical SureShell shotshell carrier is aluminum and mounts solidly to the receiver. I am not a huge shotshell carrier fan to begin with, especially models made from plastic. During our department shotgun shoot, we had to hunt down screws that came loose on two guns equipped with plastic shotshell carriers. The Mesa Tactical does not seem to suffer from that problem. All in all, this was a solid package ready for police work and I was looking forward to putting it through its paces. 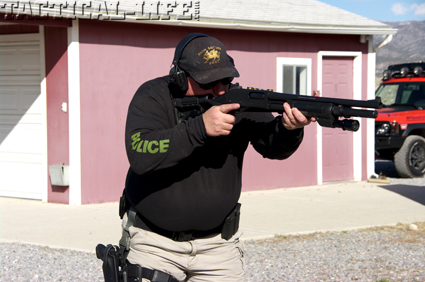 The timing could not have been better for the test firing of the Wilson. It coincided with our department shotgun shoot, so I had a chance to really put the gun through its paces. I also had the opportunity to let some officers run the gun as well. I tried this a few years back with another shotgun and it did not fair so well, so I figured it would be a good real-world test. Throughout the course of the day I was able to send about 250 rounds of practice ammunition downrange, as well as buckshot and slugs. Most of the work came prior to the shoot, but I did run the Standard Model through several drills during qualification.

The first thing I noticed was that the sling was a good and could be used in a patrol or tactical-team environment. It was nice not to see a cheesy sling that you have to immediately replace. I am no small guy and it mounted right up with little adjustment. Warming up, I noticed the action was solid and easy to run. It was “butter smooth” and cycled with little effort. It has taken 500 to 1000 rounds to get many of my other Model 870s that smooth. As I fired, the action would slide about halfway back just from the recoil. That is just about perfect, since it facilitates really fast and effortless operation.

The ghost rings sights are my preference for a combat shotgun since they are easy to see and plenty precise for real work. The Trak-Lock is a solid design and the front sight is easy to pick up. The tritium insert is not overpowering in low-light conditions. I have had this sighting system on my 870s for years and have always liked it. 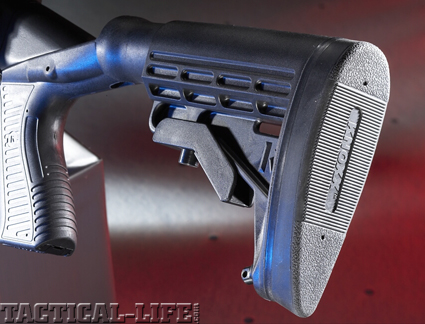 Though purely a personal preference, I have never been a big fan of collapsible stocks on a shotgun, especially the AR15 type stocks, they just seemed like an afterthought. After spending the day with the Knoxx SpecOps, however, I came to really like it. At least it appears to have been designed specifically for a shotgun. It did not interfere with my sight picture, provided a very good cheek weld, and above all it did not move when shooting. The tube is substantial and looks as if it will hold up with no issues. The stock allowed me to adjust for my short arms in general, and for my tactical gear as a practical matter. The shorter stock also allowed you to hold the gun on target easily. The pistol grip is substantial, bigger than some others I used which made it really easy to control the shotgun.

I put the Wilson through a number of select-a-slug and reloading drills. The Mesa Tactical SureShell holds the rounds tightly, almost a bit too tight to start off with. By the end of the day, it had loosened up enough to make some solid and fast ammunition changes and reloads. Using all the different methods I have been
taught to perform these functions, it went through all of them without a hitch.

I shot the Standard Model on the move and at multiple targets; it quickly became a part of me. The ergonomics were excellent, the gun pointed naturally, and it fit me right out of the bag. Everyone that handled the Wilson that day had a huge grin on their face afterwards and commented on how good the gun felt and how well it shot.

In my experience, 20 yards is about the limit with buckshot for most guns. The ammunition these days is so much more precise, many will stay inside 8 inches or so all the way out to 25 yards, making the shotgun that much more versatile. Many out there want to “slug up” on just about everything, but I don’t even think about it for most real police situations unless I am at 20 yards or farther.

Our duty slug is the Federal Tactical TruBall Rifled Slugload and I have grown to like that load, especially at ranges of 50 yards and in, the shotgun’s optimal environment. Beyond that I prefer my rifles. It is not that you can’t get the job done at 100 yards with a shotgun; the rifle just accomplishes that task much better. I was able to maintain a three-shot group at 25 yards that was touching, and pretty close to that at 50 yards with the Tactical rounds. I had no issues staying on target at 100 yards.

Final Notes
This shotgun, as specified, is about perfect for patrol or entry work. Wilson Combat has always done good work and the Standard Model shotgun is no exception. It was reliable and equipped with just what you would need to deploy it. It was smooth, accurate, and allowed for the use of tactical gear. I would take this shotgun to work in a heartbeat.

The Standard Model’s retail price is $1325. For what you get, the price is pretty good. You might save a couple bucks piecing a similar shotgun together yourself, but it would not be a ton. Many agencies simply do not allow officers to put guns together. Wilson provides a shotgun with all the bells and whistles needed to go to work and it comes direct from the manufacturer with a warranty and their support. You can spend all that build time on the range instead. For an officer who needs or wants a manufacturer-direct gun, or just a solid working shotgun, Wilson has done a very good job with this rig. It is dependable and I would count on the Standard Model in any police environment. Wilson Combat & Scattergun Technologies.