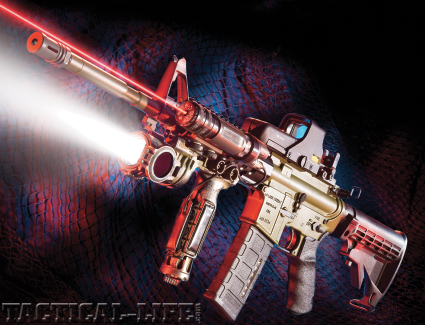 An AR in its base configuration is just a platform waiting to be hand tuned into a custom combat carbine. None do it better than the gunsmiths of Wilson Combat. They’re imminently suited for customization. The AR platform is a wonderfully versatile chassis for bolting on a diverse array of upgrades.

When you think of custom weapons, one name that will be close to the top of everyone’s list is Bill Wilson. Best known for his customized 1911 autos, the Arkansas pistolsmith has expanded his horizons into, first, combat shotguns and, more recently, custom ARs.

Wilson’s trademark is building well-appointed 1911s that work every time. His guns are known to be accurate and have traditionally been accompanied in the box with a test target shot by Bill himself (in the early days) and later by one of his skilled gunsmiths. Those same hallmarks are applied to Wilson Combat ARs, which come with an accuracy guarantee of 1-MOA (minute of angle).

Wilson offers four models of ARs that include an M4-style carbine, a 16-inch barreled Urban Tactical model and a 20-inch precision Super Sniper model. They are all hand-assembled by Wilson’s expert staff of custom gunsmiths from a combination of Wilson’s own parts and the best sourced components.

The rubber meets the road for accuracy with the barrel and the chamber. Wilson uses a stainless steel, match-grade barrel, button rifled with a standard 1-in-9-inch twist and chambered with a 5.56mm reamer for better reliability. With such a chamber, you can shoot both commercial-grade .223 ammo and military-grade 5.56x45mm fodder.

The trigger is the single most critical component of shooting an AR well. Yes, the barrel determines the inherent accuracy of a rifle, but the trigger is the interface that allows you to shoot either up to or below the rifle’s capability. Wilson has used a JP Enterprises competition trigger set to 3.5 pounds for his custom rifles (with great success, I might add) but with his characteristic knack for innovation, Bill has designed his own trigger group called the Wilson TTU which he now will be using on all his rifles. It’s a self-contained “trigger-in-a-box” so that the crucial sear-hammer relationship remains constant. It drops in and locks into place with the standard pins.

On the Urban Tactical and M4 models, Wilson’s craftsmen fit another of Bill’s unique designs, a free-floating, quad-rail forend with a scalloped rear section. This is a clever and helpful design. The various accessories that can be fitted onto a quad-rail all are mounted at the front of the gun, with the exception of a vertical grip. But a SureFire light, Insight Tech-Gear laser, or a TangoDown bipod would all go on the front portion of the rail, so why not leave the back of it smooth?

The Super Sniper model, being a 20-inch precision target configuration, does not come with Wilson’s quad-rail, but instead with a round, smooth, free-floating rail that can accept a bipod.

Available Options
You’ve bought a Wilson Combat carbine but that’s just the beginning. Now you need to get it trick out. The first area is custom paint or, in this case, Wilson’s Armor-Tuff finish. This is a polymer coating that’s applied with an airbrush and then heat-cured in an oven. An olive drab green is used on the UT-15 and M-4T. I imagine a flat-dark earth could be ordered, although Wilson might balk at orange flames.

Optics are also another option. We opted for an EOTech Holographic Weapon Sight (HWS), which is as fast as a rattlesnake and just about as accurate. It’s a close-range reflex sight, meaning it does not magnify and the focal plane of the target through the optic is one and the same with the actual target. It is not a 300-yard sight, not even a 200-yard sight and fairly crude for even 100 yards. But inside of 100, it’s hell on wheels.

Night shooting is not, as some would imply, an issue of white light. Night shooting is largely a game of infrared lasers on the gun and NODs (night observation device) on your head. For this, we chose a PEQ-2 by Insight Tech-Gear, which is the most widely issued IR (infrared) laser ever fielded. Granted, the PEQ-2 is bit long in the tooth and has been surpassed by Insight’s ATPIAL and PEQ-16, but the “two” is still a damn fine IR laser/illuminator.

Of course the best way to use an IR laser is with an I2 night vision device that mounts directly in front of the day optic to provide a day/night sighting system. Knight’s Armament Company makes three versions of the PVS-22 in a close-range CQB, a medium-range standard model and a long-range magnum version. We opted for the close-range CQB model on a Wilson Combat UT-15 and M4.

That said, white light plays a decisive role in house clearing and other CQB direct actions that take place in dim light. For that you need to identify your target, a capability that IR does not provide, and use the blinding light to disorient or blind a potential enemy. Despite a host of Chinese-made knockoffs, the original SureFire weapon lights remain, and shall remain my go-to battle light.

I would also exchange the standard-issue collapsible stock for a Vltor EMOD with its larger butt, radiused cheekpiece and internal, waterproof battery compartments.

For a functional addition, the new TangoDown ARC magazine is a must-have. It’s the first ground-up, correctly engineered magazine for the AR since Eugene Stoner invented the gun. The plain GI aluminum magazine will bend its feed lips over on one 5-foot drop. The ARC magazine takes a 5-foot drop of a loaded magazine onto its feed lips and laughs. Throw in the ability to feed reliably in the much higher rate-of-fire M249 and to operate from -40 to +140 degrees and you have one of the best engineered magazine possible.

For sling mounting, we want a system that accommodates the superb Viking Tactical VTAC sling, and we haven’t found a better combination than a Daniel Defense rail mounted front swivel mount and a TangoDown “no gunsmithing” three-way mount that Allen screws right onto the rifle’s buffer extension tube, otherwise known as the stock tube.

Final Notes
By the time you’re done customizing your Wilson you’ve got several times the cost of the base gun in custom accessories. Granted, a Wilson custom combat AR already comes with a lot of upgrades, but for the guy who wants a truly personalized rifle, that’s just the start. 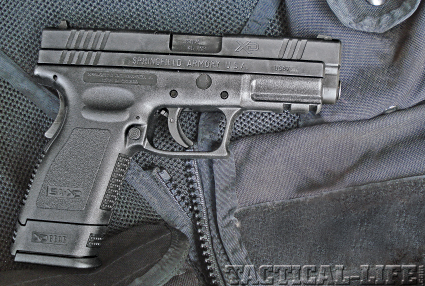