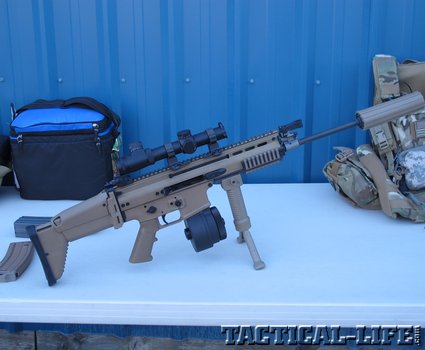 A suppressed FN SCAR with the XS Products 50-round, 5.56mm drum in place. Note how compact the magazine is compared with many other high-capacity options.

I have to admit to being one of those old dinosaurs who never saw a single 30-round M16 magazine during their entire military career. About all you can say about the 20-rounders we did carry was that they were a heck of a lot lighter than the standard M14 mags the Army issued us at the time. The move to 30-round magazines was a step in the right direction. But anything beyond that in the conventional banana-shape mag presents problems for those who prefer to keep their exposure to return fire to a minimum. As the old line in Vietnam went, “I would cut the buttons of my fatigues if I thought it would help me get closer to the ground!” 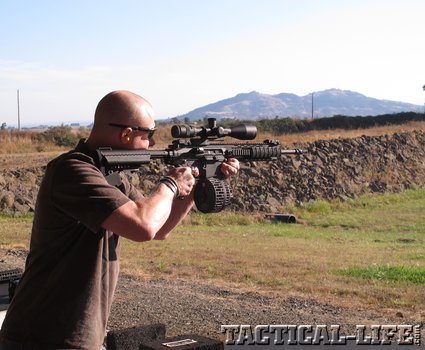 James Malarkey demonstrates his own drum magazine on the 7.62mm PWS MK216. When I fired this weapon, the magazine functioned flawlessly for all 50 rounds.

While there are a number of drum-type magazines on the market, rule one is that, if they don’t offer near-perfect reliability, then it’s better to stay with the standard 30. Thanks to an invite from James Malarkey of XS Products, I had a chance to spend a range day with XS Products’ 50-round drum magazines. After firing somewhere between 500 and a 1,000 rounds through a number of different rifles in semi- and full-auto, I came away impressed.

On The Range In Oregon

Billed as the 2012 New Tactical Products Dealer Demonstration Day, XS Products enlisted the support of Rainier Arms, U.S. Tactical Supply and roughly 20 other companies to put on a field trial at the Albany Rifle and Pistol Club range in Oregon, for law enforcement and its suppliers. Both 5.56mm and 7.62mm rifles in several common variations were available on the firing line. Shooters were also provided with a number of other interesting weapons that XS Products doesn’t currently make magazines for, to get hands-on impressions. Two such guns were a nice, suppressed .300 AAC Blackout from Rainier Arms and a 7.62mm Kel-Tech RFB (rifle–forward-ejecting bullpup), the first I had ever shot. 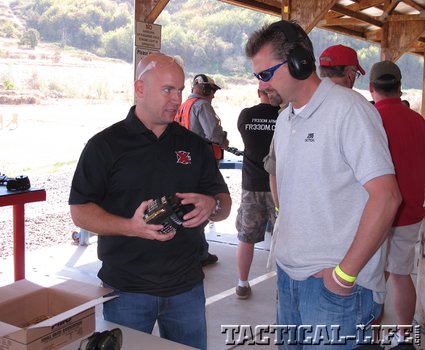 While XS Products’ 5.56mm 50-round drum for the AR platform is not the largest magazine on the market (XS Products also has a 100-round drum in the works), it does offer a much more compact profile than those of some competitors. I didn’t have a chance to measure the drum, but it seemed to be only slightly longer than a conventional 20-rounder and a bit shorter than a 30-round magazine. The drum is loaded by winding a clock-like spring and inserting one round at a time to the mouth of magazine. Total weight for the loaded drum runs around 2.5 pounds. (This will vary slightly with the weight of the bullet.) The suggested retail price of each X-15 drum is currently $189. 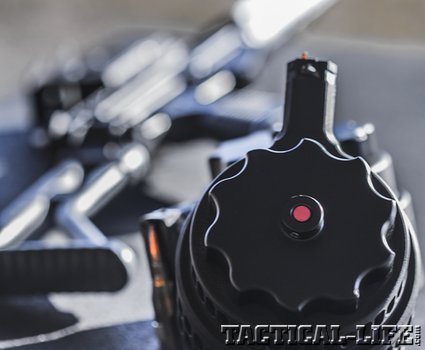 One of the obvious advantages of any 5.56mm AR-based magazine (for both the manufacturer and the shooter) is that it will fit a wide range of modern tactical rifles. I had a chance to run fully loaded drums through a PWS rifle, a Rainier Arms rifle and a suppressed Knight’s Armament SR-25, on both semi- and full-auto (just semi-auto on the SR-25). In the case of the PWS, I ran two magazines full-auto, one after the other, for a 100 rounds without a single malfunction. Having 50 rounds available is nice with a semi-auto rifle, but it’s a major battlefield advantage on full-auto. One obvious potential use for the XS Products magazine would be on the current-issue USMC M27 squad automatic weapon. I for one thought it was a mistake to switch from a belt-fed weapon to a 30-round magazine. Moving up to a 50- or even 100-round drum when it becomes available would correct a lot of that potential drop in firepower. I also asked XS Products about the possibility of a magazine for the extremely popular Ruger Mini-14 and was told it is working on a design. 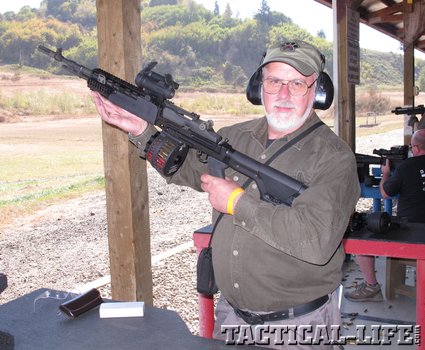 As someone who has actually gone through basic on the M14, I found that handling this EBR version of the M1A with the XS Products magazine was an especially pleasurable experience.

Magazines for 7.62mm rifles are a little more complicated than 5.56mm models, but XS Products is doing an excellent job of covering the spectrum. Currently, the company offers 50-round drums for the Knight’s Armament M110, the PWS MK216, the U.S. M14 and M1A, the FN FAL, the HK91 the Armalite AR-10 and other weapons utilizing any of the above magazines. The larger round means a loaded drum must tip the scales at 5.7 pounds, weight that’s a little more noticeable than the 5.56mm’s. In my opinion, full-auto fire from most conventional 7.62mm rifles is less important than precise semi-auto shot placement. That said, a good marksman behind an accurate, optic-sighted rifle with a 50-round magazine can deny an attacking force a lot of ground. 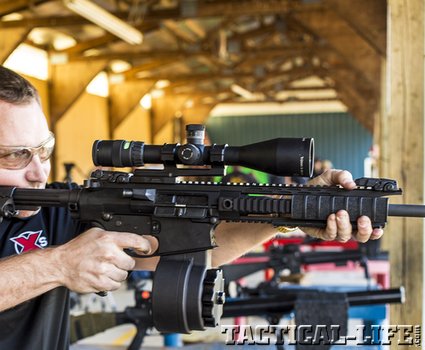 James Malarkey of XS Products demonstrates his product during the LEO range day in Albany, Oregon.

Over a period of several hours, I fired a PWS MK216, an Armalite AR-10 and an EBR (enhanced battle rifle) version of the M1A, each with XS Products’ drum attached. Again, the magazines performed perfectly in this several-hundred-round evaluation. I also did not observe any of the other shooters experience problems during their range time. For more information, visit xs-products.com. 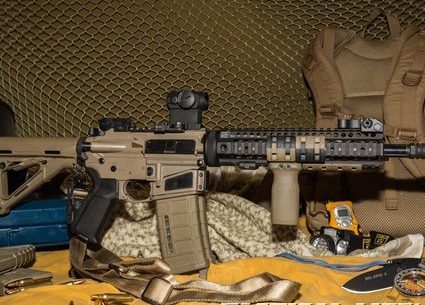 A suppressed FN SCAR with the XS Products 50-round, 5.56mm drum in place. Note…