5
SHARES
234
VIEWS
Share on FacebookShare on Twitter
The Citadel line of optics from Sightmark has become synonymous with low cost solutions for any firearms user. As this line already includes scopes for the long- and short-range rifleman, there was still a need for the AR enthusiast looking to punch out farther than the current 1-6X offering can adequately accommodate. That being so, Sightmark decided to bridge the gap with the highly versatile 1-10×24 CR1 AR riflescope. 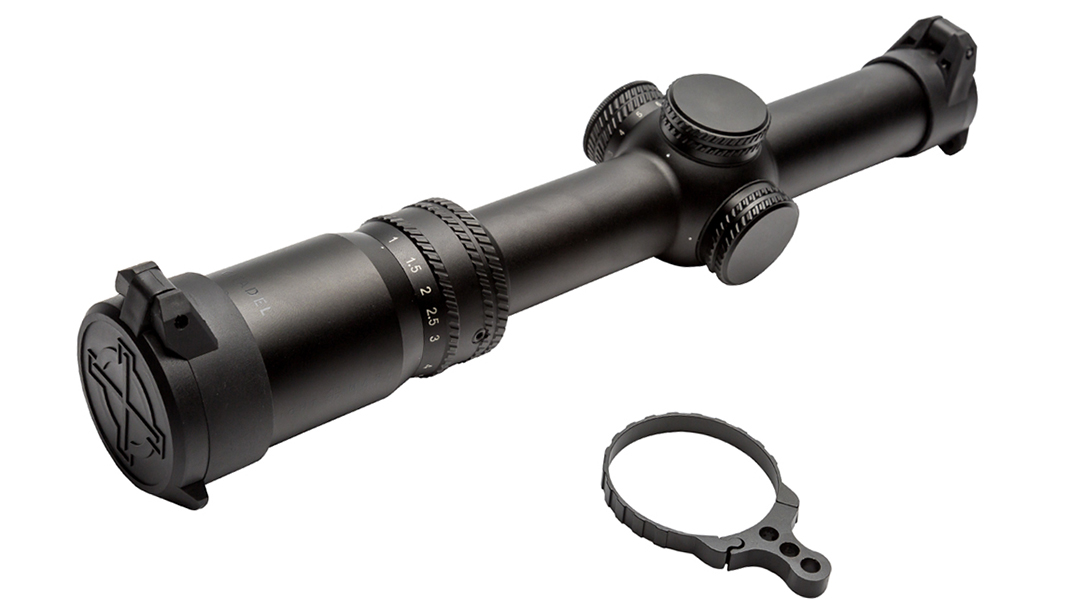 With a 10X magnification range this optic is equally at home banging steel at 500 yards as it is transitioning across a row of pepper poppers on a 3-Gun course of fire. The horseshoe-style reticle is set into the second focal plane. It consists of a circular main subtension that is 9.65 MOA in diameter. In the center of this is a 1 MOA dot. It is ultra-precise as it only covers one inch of your target per 100 yards of distance (at the maximum power setting). This central aim point is flanked by up to 20 MOA worth of hashmarks; those help to address wind when holding off at longer distances. Directly below the horseshoe are pre-calculated subtentions for fire solutions all the way out to 600 yards with standard 55-grain 5.56 ammunition.

Of course you can use this optic for whichever round you wish, and we did so at the 2019 Athlon Outdoor Rendezvous when we tested it atop an LWRC AR-10 chambered in 7.62×51. We quickly confirmed zero at 100 yards. We found that the third hash mark down worked well for our 500 yard holdover. I delivered several hits to our 18-inch DOA steel target by just holding over. Then I dialed up 10 minutes of angle and used the center dot to get a few more on target. After several magazines of ammunition I backed down those same 20 clicks and confirmed repeatability as I clanged the 100 yard steel yet again.

I also enjoyed the included throw lever. I found it easy to manipulate with either the shooting hand or the support hand as I snapped it back down to 1X and worked over the closer-range 50 yard steel. The new optic only added around 18 ounces. It didn’t really impede my ability to swing it from target to target. In this time I was also able confirm it was a true 1X, as I shot with both eyes open and was not able to notice any size distortion of the targets as I engaged them.

As I sat the rifle back down on the shooting bench I observed the illuminated reticle. It will serve very valuable in low light hunting scenarios, or if a shooter really wants to produce the feeling of a red dot or holographic sight. I did think the clicks could be a little more “crisp” on this optic. However, it held zero under 7.62 recoil and was repeatable. Later I found out that these turrets are resettable to zero; this makes it easy to keep track of any adjustments that you have made.

I also found out that MSRP on this optic is only $479; that puts it within reach of a wide array of gun owners. At that price, it’s certainly feature packed. Having said that, I would have loved to see a parallax adjustment, as this optic is capable of covering an extraordinarily large range of shooting distances. Overall I enjoyed working with the Citadel CR1. I would recommend it for anyone looking to maximize their rifle’s utility and stay within a $500 glass budget. It’s kind of a no brainer. For more information, please visit sightmark.com.