One idea has held true for millennia: The very best products in any market are purpose- driven by the end-users. In simpler terms, the clients tell a company what they need, and they in turn produce said product. When that is done to exacting standards, incredible things can roll off production floors. This can be seen from time to time in the firearms industry, but for the most part it is driven by manufacturers making products they believe will do well in the market. However, one company, that still clings to the “build to client’s demands” mantra is Barrett Firearms. And nowhere is that more evident than with its newest AR-platform rifle, the REC10.

The REC10 is the big .308 Winchester/7.62mm NATO brother of the very popular REC7 in 5.56mm NATO. As you may have guessed, the gun is the product of ongoing demand from Barrett end-users and not just Joe Civilian shooters. Barrett has the widest variety of firearms in use by militaries around the world, and it is this elite clientele that pressed Barrett to fill an ever-growing need.

While there are multiple AR-10-style rifles on the market, no single one has really risen to the top to lead the way. Barrett is about to change that. The company’s reputation in these circles is stellar, and it’s one reason why it has enjoyed the success it has. A sample of that reputation manifested itself when I spoke with Chris Barrett on the phone. The REC10 was not even on the shelf yet and his office was already hosting a delegation from the military crossing T’s and dotting I’s as they were already purchasing these guns for service. That speaks volumes about the quality of guns coming out of the Barrett shop. At this time, Barrett is going to offer a carbine-style version of the gun like the one I tested as well as a long-range version. I am sure there will be more to follow as well. 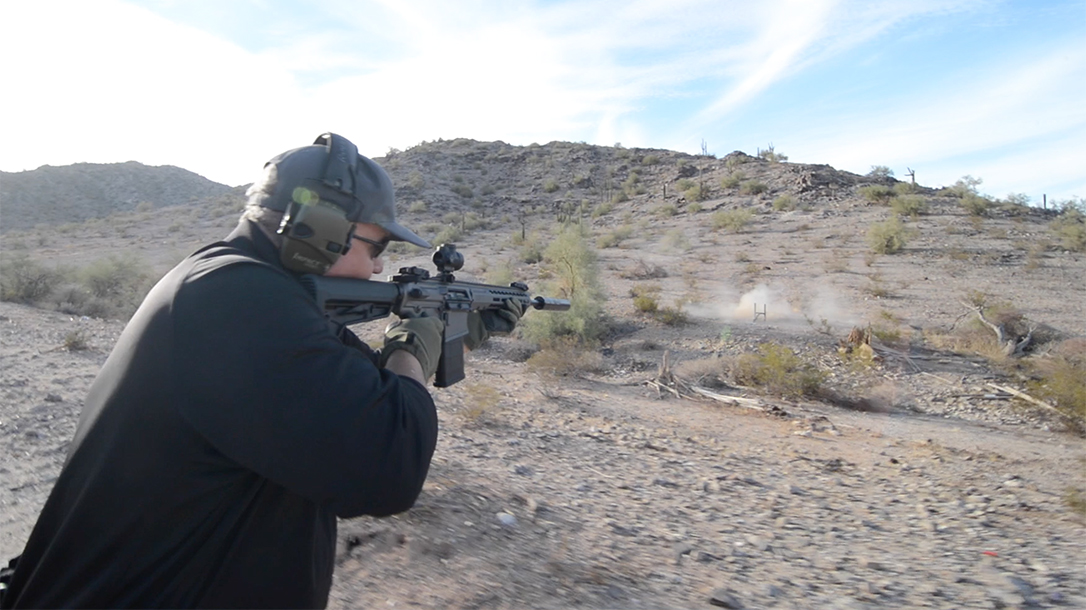 The REC10 borrows many design features from the REC7 and yet maintains its own identity. This isn’t just a hastily assembled AR-10-style rifle. This is a well-thought-out and designed piece of engineering. Every detail has been carefully considered. A good example is the barrel. It is a button-rifled, chrome-lined design with a weight-optimized profile. Barrett took into consideration the fact that end- users would absolutely be putting optics and other pieces of kit on this gun. This helps offset the weight of the glass and keep the gun more balanced.

The gas tube and gas block are intermediate designs, or what I would classify as “functionally appropriate” for the gun. The benefits of this design are many, but the two primary points are this: The gun has dramatically less recoil and, in turn, is very accurate and fast on follow-up shots. A good description of it is a firm pulse as opposed to a hard recoil push. During shooting, I inspected the ejected brass and found no excessive pull marks on them, which is a good indication of a smooth-shooting gun. The other benefit is the weapon’s lifespan. A rifle is a mechanical device, and after prolonged violent cycles, it will begin to lose its accuracy and eventually its ability to function. The REC10 is designed for a long service life.

The handguard is an M-LOK design that is lightweight while providing sufficient room for accessories such as lights or laser-aiming devices. The upper and lower receivers are precision- machined from a billet of 7075-T6 aluminum for an exceptional fit. There was almost zero yaw or rattle between the upper and lower on my test sample. The REC10 also uses a DLC-treated bolt carrier group and a chrome-lined chamber.

This was an interesting choice, as many companies are choosing other lining options. When I asked Chris Barrett about it he said, “Nothing works better than chrome. Our guns are used in environments with silica-like sand and dust. With super-hot chamber temperatures, this stuff sticks to the chamber and ultimately begins to abrade it.” That abrasion will absolutely affect accuracy and ultimately the reliability of the gun.

The gun also sports an ambidextrous bolt release, an ambidextrous magazine release and a reversible safety with a 45-degree throw. All together, these features make the gun easy to manipulate. The back end of the gun brings us to the hydraulic buffer and ultimately the Magpul MOE-SL stock that finishes off the weapon.

When I took this gun out for a test-drive, I tried to rig it as it may be used in a “business” environment. I included a Trijicon MRO and a Palmetto State Defense URS MK7 suppressor, essentially creating a lightweight .308 meant for fighting. I ran a vast spectrum of ammunition through the REC10 to see if it would have any issues or prefer one flavor over another. The menu for the day included 168-grain Tactical Bonded Tip, 185-grain Gold Medal Berger Open-Tip Match (OTM) and 168-grain Tipped MatchKing (TMK) ammo from Federal as well as Black Hills’ 175-grain Match HPs and Hornady’s 168-grain Black A-MAXs and 178-grain Match BTHPs.

I would like to say that I found one that performed well above the others, but that simply wasn’t the case. The REC10 took everything in and launched it out flawlessly with each press of the trigger. For the accuracy portion of the evaluation, I chose three mostly similar rounds, and in that, the Federal 168-grain TMKs won the prize for creating the smallest group. I was able to get a group measuring just 0.75 inches at 100 yards. This is significant considering that I was using an optic that had a 2-MOA dot. Granted, the rifle was benched with a sandbag so there almost zero movement, but it’s still impressive. I believe my groups could have easily been tighter if I had used a precision optic for the test. 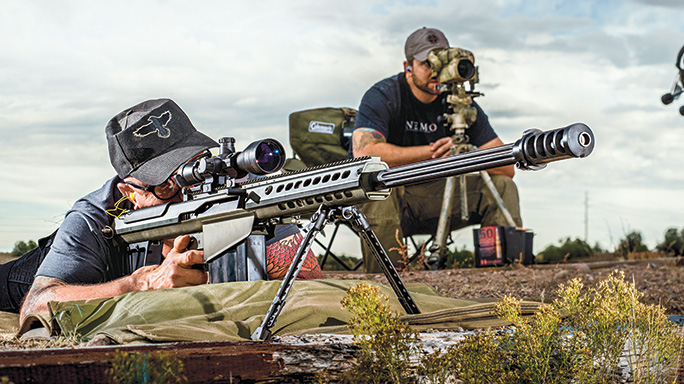 The REC10 is built with a QMS trigger group from ALG Defense. This is an important point because the gun is designed for duty and requires a mil-spec-style trigger. Would a super-nice drop-in competition trigger be a great addition? Sure, but this is not a competition gun. The pull of the QMS has the same general feel as a standard mil-spec trigger, but most of the grittiness of a stock trigger has been removed. In the end, the reliability of a stock trigger remains, however.

As I mentioned earlier, the gun is designed to run smoothly without harsh recoil. Coming in at 8.25 pounds unloaded, the gun is not a featherweight, but by no means is it a chore to carry. And with its ambidextrous controls, I also found the REC10 easy and fast to run. I ran multiple moving drills on steel with reloads, and the gun made the task pretty easy.

After I had accumulated a decent pile of brass, I made a quick optic change. I had the fortune of getting my hands on the Trijicon REAP-IR mini thermal riflescope and wanted to give it a try on this equally impressive rifle. The REAP-IR optimizes the SWAP (size, weight and power) mindset with its small packaging combined with lightweight, rugged features. It has incredible resolution and is light-years ahead of the competition. The REAP-IR is a touch over 20 ounces but was easy to manage. This setup proved to be a pretty solid low-light configuration, and I imagine this gun will be similarly configured in hostile environments. To say that it was almost “not fair” to shoot with this setup would be an understatement. In the end, this was one of the most enjoyable range sessions I have had in a long time.

In the end, the Barrett REC10 has the potential to set the standard in AR-10-style rifles. This is not just an off-the-cuff statement but one based on knowing what Barrett has accomplished in the past. Chris Barrett said it best when he told me that the REC10 has “Barrett DNA infused into a .308 platform.” and that he is very proud Barrett rifles are “rifles that the hardest users in the world trust.” The REC10 is a solid weapon that is certain to change the semi-auto .308 world.