Thanks mostly to the 6.5 Creedmoor, 6.5mm cartridges and rifles have become very popular in the gun world lately because of all their advantages. These rounds are typically light on recoil but have high ballistic coefficients (BCs), allowing them to fly flatter and cheat wind better at longer distances. That’s why these rounds are really taking over the hunting world. Many have adapted 6.5mm cartridges to existing platforms, and the AR is no exception. One of the most popular has been the 6.5 Grendel.

Designed specifically for use in an AR, the 6.5 Grendel brings serious accuracy and distance to the platform. Intended as an intermediate cartridge, it brought the inherent accuracy of 6.5mm bullets to a more compact and convenient semi-automatic rifle. You can except velocities in the 2,500-fps range from a 20-inch barrel, and the wide variety of bullet weights, ranging from 90 to 130 grains, translates to incredible versatility. For example, these bullets penetrate deeply and expand completely for hunting, making them excellent on pests like coyotes. That’s what I use my 6.5 Grendel rifles for, but this chambering has proven itself on intermediate-sized game like deer, too.

But there have been some teething issues. Tuning a 6.5 Grendel rifle takes a bit more effort, and like many other cartridges designed for use in 5.56mm magazines, feeding can be problematic. This round was originally designed around a 5.56mm-sized bolt and carrier, so you had to have an incredibly strong bolt made to precise tolerances for optimum reliability. Thankfully, companies are now producing Grendel-specific magazines to deal with the feeding issues, and CMMG’s new Anvil series deals with the bolt issue perfectly.

CMMG first introduced its PowerBolt technology with the 7.62x39mm Mk47 Mutant. Previous attempts at chambering non-traditional rounds in standard AR-15 receivers were less than stellar. Most revolved around using AR magazines altered for the 7.62x39mm, but these suffered from timing issues. The Mutant used AK magazines as well as the PowerBolt system, which was designed specifically to provide significant thrust for calibers with large case diameters in 5.56mm-sized receivers. The Mutant quickly took off, and it’s one of the most reliable AR-based 7.62x39mm rifles I’ve ever tested. So it only made sense for CMMG to adapt the PowerBolt design to the 6.5 Grendel, creating the Anvil series of MkW-15 rifles. 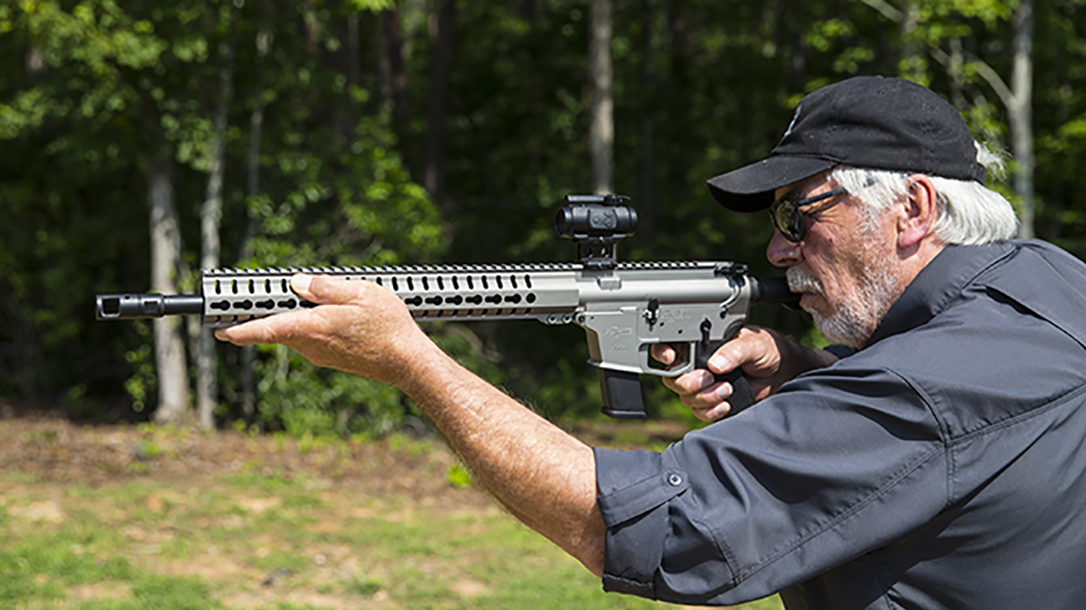 Essentially, this system utilizes an AR-10-based bolt and carrier that has been altered to work with mid-sized cartridges like the 7.62x39mm, .458 SOCOM and 6.5 Grendel. Rather than opening up a 5.56mm bolt carrier group, a larger .308 version is used, providing superior strength and longevity. It also provides positive extraction and ejection.

To evaluate an Anvil rifle, CMMG recently sent me its MkW-15 XFT2 for testing. The upper and lower receivers are crafted from a billet of 7075-T6 aluminum, and while the standard models are hardcoat anodized black, my sample came with an optional gray Cerakote finish.

The upper boasts a medium-contour, 16.1-inch barrel made from 416 stainless steel with a 1-in-8-inch twist rate. The muzzle has 5/8×24-tpi threading and comes with one of CMMG’s SV muzzle brakes installed. Surrounding the barrel and gas system is CMMG’s RKM15 handguard, which features a top rail and KeyMod slots along the sides and bottom.

The lower has a flared magazine well that can accept any AR-15/M16-pattern magazine. One 10-round 6.5 Grendel magazine was supplied with my test rifle, but Alexander Arms makes several higher-capacity versions. Much like the 6.8 SPC, the 6.5 Grendel magazines that work best are those made from steel using purpose-built followers.

Since the MkW-15 was designed with increased range in mind, I wanted to set up my test rifle with an intermediate-power scope for ranges out to 600 meters. So I installed a Nightforce 4-16x50mm ATACR scope in a Spuhr mount. This is a first-focal-plane scope with crisp, clear glass and rugged construction. My test scope was equipped with a Horus T3 reticle.

Along with the supplied SV muzzle brake, I tested the MkW-15 with an NG2 Defense MZLMAX. I supplemented the 10-round magazine with 25-rounders from Alexander Arms. For stability from the bench or prone, I used an Atlas bipod, and for ranging, I used a Sig Sauer KILO2400ABS. The latter not only provides accurate ranging out to a mile, but it is also equipped with Applied Ballistics software for solid holds.

In my experience, the 6.5 Grendel tends to be rather finicky when it comes to factory ammunition and accuracy. Some rifles will shoot incredibly well using match ammunition, and others will provide marginal groups with the same ammo. CMMG’s offering seemed to like all of the rounds I used, but the most accurate was Alexander Arms’ 123-grain Lapua Scenar ammo, with the best five-shot group measuring 0.47 inches at 100 yards. The other loads created best groups ranging from 0.6 to 0.75 inches.

The Geissele SSA trigger was a huge contributor to the rifle’s accuracy on the range. In fact, I’d say this is one of the most consistently accurate 6.5 Grendels I’ve tested. My personal rifle in this chambering clusters handloads into almost the same hole, but most factory ammunition is at or over an inch, so CMMG seems to have done a solid job here. 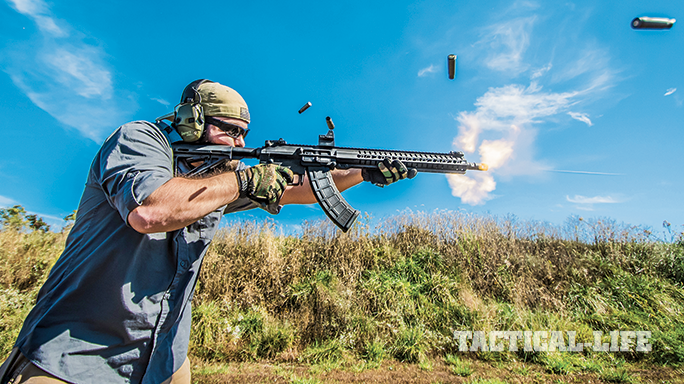 The only 6.5 Grendel rifle I’ve ever tested that was any more reliable was a custom AK, not an AR. Most of the other Grendels I’ve run required some tuning, especially if you move between vastly different bullet weights. The most common issues with these rifles come in terms of feeding. But the MkW-15 ran flawlessly using the factory magazine. The rifle never missed a beat with the Alexander Arms mags, either.

Moving further out in range, the 6.5 Grendel performed as expected. Using the Applied Ballistics program in the KILO2400ABS, I developed a firing solution for 900 yards using Hornady’s 123-grain A-MAX rounds with a trued velocity of 2,480 fps out of the 16-inch barrel. Once the wind was accounted for, it was easy to get hits from 300 to 600 yards. Beyond that, a bit more effort was required. The sweet spot for the edge of this caliber’s range is probably an 18- or 20-inch barrel, but for hunting or shooting at practical ranges, this 16-inch barrel is excellent.

The supplied SV muzzle brake helped reduce recoil, but it’s loud and somewhat pressure intensive, as with most brakes. However, the NG2 Defense MZLMAX eliminated most of that. The recoil reduction was about the same, but no blast came back toward me or to the sides. On this particular rifle, the MZLMAX really helped.

Since the MkW-15 comes with a precision trigger, it would be nice to see the addition of an ambidextrous safety. Most who shoot precision ARs do so with their strong-hand thumb off the grip, and an ambidextrous safety makes this much easier. So that would be one of the first things I’d add if this gun were mine, and at $2,000, I think it should be standard on this rifle. Also, no rails are provided, which seems to be the norm today, but you’ll need to get a bottom rail if you plan on using a bipod or some sort of QD mount for a sling. The Magpul stock supports a QD attachment, but the handguard doesn’t as is.

In the end, the 6.5 Grendel remains a very popular cartridge among varmint, predator and even some medium-game hunters. These rifles are typically pretty light and handy, and with the correct ammo, they can be very accurate and capable. CMMG has done a good job here; the PowerBolt design and mid-sized receiver lend themselves to this chambering. The MkW-15 is a very solid offering that is accurate, reliable and works well out of the box. If you are looking to add a 6.5 Grendel rifle to your collection, add this one to your list.